The entrance to Once Upon a Crime, located right off of Lyndale (Photos by Derek Anderson)

Blood. Guns. Chalk-lines. Fedora hats. These things have been staples in the mystery genre for decades. And Americans like a good mystery. Why else would CSI: Miami, NCIS, and shows like them dominate televisions in living rooms across the country? At the movies, box office hit, Sherlock Holmes: A Game of Shadows, has popularized the witty London sleuth for a whole new generation. For some, this love of a good mystery crosses into the world of literature. But what if you’re tired of only reading James Patterson and Michael Connelly novels that Barnes & Noble carries? Well, for those hunting a new mid-list author to consume or a place to shop for a large variety of mystery books, Once Upon a Crime Mystery Bookstore needs to be penciled into your schedule.

When you first step through the door of Once Upon a Crime, located on W. 26th Street just off Lyndale in Uptown Minneapolis (only five minutes away from Metropolitan State University’s Minneapolis campus), the word “cozy” comes to mind. First, you inhale the instantly relaxing smell of paper, ink, and aging wood. Waiting to be petted is the store dog Shamus. The Border Collie-Dalmatian-Lab-German Shepherd mix lies on his stomach by the door, carving a bone with his canines. And of course there are the mystery books—in total 20,000 to 30,000 of them. This abundance of hardcovers and paperbacks sit on bookshelves that line the walls and fill parts of the small room’s interior.

Always at the ready to help navigate you to the book of your dreams are the owners of Once Upon a Crime: Pat Frovarp and Gary Shulze. The two bought the store from former owner Steve Stilwell on August 1, 2002.

“There had been rumors about Steve selling. I was in a management job that I hated. I got to know Pat as being a customer here. And she just sprung the question once: ‘What do you think about leaving that job and running a bookstore with me?’” Said Shulze, who eagerly took up the offer. 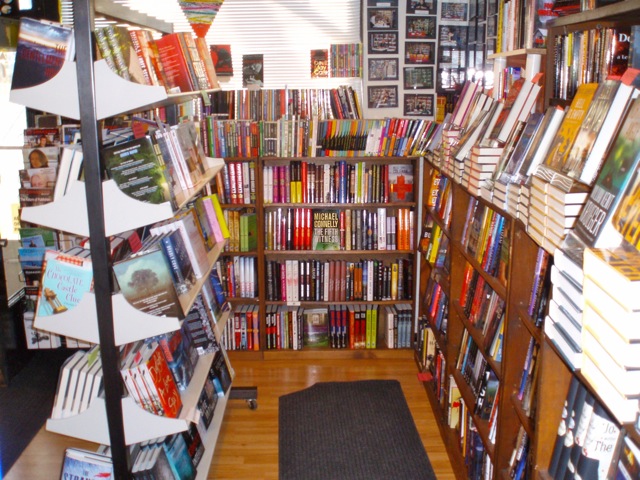 A corner of Once Upon a Crime’s main area

The process of owning and running your own business can be a daunting one, but Once Upon a Crime was like an old friend that Frovarp and Shulze knew very well. Frovarp had been a manager of sorts at the shop for a couple of years prior to taking over, and she was fine-tuned in how to operate the place. Gary had been a customer for about 15 years, and he was consistent in taking armfuls of books home.

After five years of keeping the store alive with a love for the mystery genre, customers, and each other, Frovarp and Shulze were married within the shop. On August 1, 2007 (the same day of the I-35W bridge collapse), the co-owners swapped vows in a small, comfortable ceremony.

Both Frovarp and Shulze were avid readers of mysteries before taking the shop’s reigns from Stillwell. Being around books every workday, therefore, is sort of like living in a dream.

“It’s not work. It’s fun here. You get to play with books,” Shulze said.

However, just because books surround Shulze doesn’t mean he gets to read for pure leisure all the time. 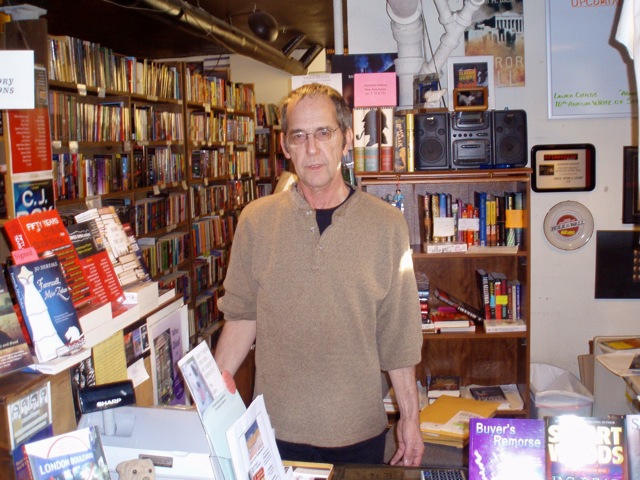 Gary Shulze, the co-owner of Once Upon a Crime since August of 2002

Much of the reading Frovarp and Shulze do is for the benefit of mystery writers who submit books for review. If Frovarp and Shulze like what they read, they’ll not only carry the book in their store, but also recommend it to many of their customers. If your book dazzles the owners at Once Upon a Crime, it will get a lot of publicity.

This is especially true of authors from the Land of 10,000 Lakes. On Once Upon a Crime’s website, there is a page that features over 70 links to websites and press pages of Minnesota authors. These authors range from New York Times bestsellers like Vince Flynn to newcomers like Minneapolis’s Phil Rustad. This publicity is considered a great honor in the writing community.

“…Once Upon A Crime has a vast following of loyal readers who trust them when it comes to recommendations. Those readers know that Pat and Gary won’t steer them wrong on a book selection, so they are willing to buy the books Once Upon A Crime recommends. That’s why just getting in the store is so important for a writer. When your title shows up in one of their email newsletters or mailings, (they still do that occasionally), you know that folks will buy it,” said Rustad, whose debut novel, Dart, is on sale now through Itasca Books.

Frovarp’s and Shulze’s willingness to do whatever it takes to get a good book in their customers’ hands helps keep their independent bookstore moving forward in an era where online sellers, self-publishing, and big chain shops like Barnes & Noble are dominating the book-selling market.

“The kind of service provided at independent bookstores like Once Upon A Crime and Uncle Edgar’s/Uncle Hugo’s is important because it is so far more personal and individual-oriented than what online markets and big chain stores can provide. The interactive relationship between independent booksellers and their readers AND authors is organic. Independent booksellers have to make a profit to survive, but they want to make that profit based on their love of books and their customers’ love of books, not by simplistic, naked devotion to a bottom line,” said Margaret Frazer, an Elk River-area author whose backlist of 24 books is usually kept in stock at Once Upon a Crime.

Authors recommended by Frovarp and Shulze often come into the shop for book signings. Once Upon a Crime’s biggest event of the year is its annual Write of Spring held every April, a function in which authors meet and mingle with readers. The four-hour event has hosted as many as 65 authors and several hundred customers in the past.

Shulze said of the large crowds that Write of Spring generates: “Somebody said there could have been a murder and the body wouldn’t fall to the ground for hours.”

This April marks the shop’s 25th anniversary and tenth annual Write of Spring. To celebrate the double whammy, Frovarp and Shulze kick-started the publication of Writes of Spring: a mystery short-story anthology with 34 contributing authors. The book is dedicated to Minnesota mystery-writing guru, Harold Adams, and it will be launched April 7, 2012, at the Write of Spring.

Write of Spring crowd members can easily spill over into Once Upon a Crime’s two-room extension, a place known as “The Annex.” Simply step through the store’s back door, walk down a white hallway, and ask one of the owners to unlock a door that looks just like the rest. On the other side of this wood, you will stumble into a hidden trove of literary treasure.

Carpeted by thick rugs and displaying a unique seating area with two upholstered chairs and an antique globe, The Annex is a mini-library of Frovarp’s and Shulze’s most rare and most valuable literature. The collection has a wide range. You can find everything from a first print Joe R. Lansdale hardcover to a unique pulp fiction magazine from the 1970s. 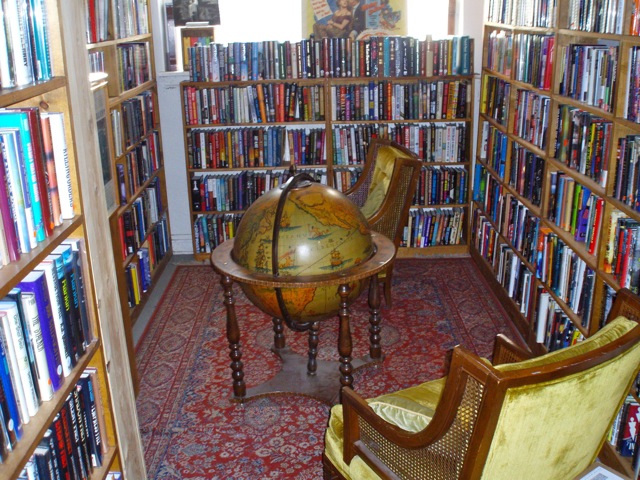 Seating area in The Annex, which houses rare editions of mystery books

In the spring of 2011, Once Upon a Crime was nationally recognized for its promotion of mystery literature with the Raven award. According to Once Upon a Crime’s website, “the award recognizes outstanding achievement in the mystery field outside the realm of creative writing.” Frovarp and Shulze received the trophy raven at a ceremony in New York City.

So, whether you live a stone’s throw from Uptown or need to go out of your way to get to Once Upon a Crime, you should stop in and say “hi.” It will be worth your while. As Rustad points out, it’s no mystery why Frovarp and Shulze run a must-stop shop: “Indie stores like Once Upon A Crime know writing and can offer their customers better understanding and guidance to the titles those customers will enjoy.”

Shoot them an email at onceuponacrime@earthlink.net

Phil Rustad can be reached at: http://www.philrustadmysteries.com/

This article was originally published in the Metropolitan, the school newspaper of Metropolitan State University.