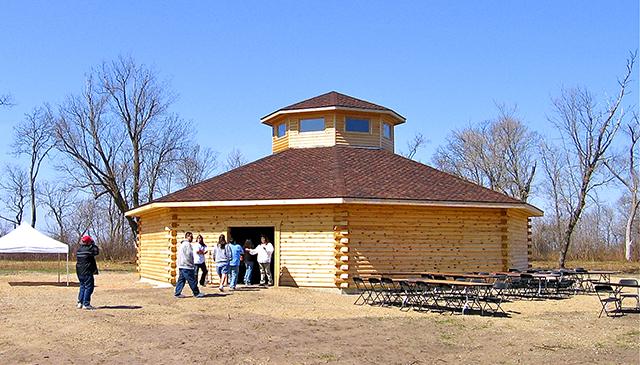 The Ojibwe Language and Culture Camp will be held at the Round House in Ponemah. (Red Lake Government and Public Relations)

My Norwegian-born grandmother, who arrived on America’s shores in 1912, played an outsize role in my childhood telling stories of what seemed to us her exotic homeland where children skied to school, had summer homes on the fjords and every Christmas baked hundreds of Scandinavian cookies for family and friends.

Though she spoke English with a distinctive Norwegian accent, my darling, diminutive grandma who lived to 102, rarely spoke a word of her native tongue (never an “uff-da”), reverting only as she lay dying to the language of her birth in speaking out loud “The Lord’s Prayer.”

I see and treasure that Norwegian heritage playing out in my mother’s family even today with their northern Minnesota cabins in the pines, the foods we eat and our Christmas traditions, including hymns. (As youngsters, my sister and I sang the Lutheran hymn “I Am So Glad Each Christmas Eve” in Norwegian to Grandma, bringing tears to her eyes. Waves of emotion still roll over me when I sing it.)

But what if, as happened to the indigenous people of this state – the Ojibwe — my grandmother had been fearful of sharing her Norwegian roots? What if not speaking her native language had not been her choice?

Tom Barrett Sr., who heads the Red Lake Chemical Health Program for the Red Lake Nation north of Bemidji, can tell that story for his Ojibwe people.

“Our language was basically stripped from us a generation or two ago. The children were forbidden to talk their native language,’’ says Barrett, 54, recalling how white authorities swept onto reservations and carried Ojibwe children off to boarding schools to assimilate to the white culture. And the ripple effects of that action are still being felt by Native Americans today.

As Carter Meland, a lecturer in American Indian Studies at the University of Minnesota, once told me: “History is a living part of the present.’’

Fearing their languages and traditions will disappear as their elders die, Native Americans of the Red Lake Nation north of Bemidji and across the nation are focused on a Language Revitalization Project and related efforts to retain the native culture.

Tribal authorities this week host the first Ojibwe Language and Culture Camp running Aug. 13-15 on the Red Lake reservation for youths 10 to 14 years old. The limit was 30 young people, but 45 signed on, and Barrett says they didn’t have the heart to turn any away. Other years the tribe has spearheaded traditional hunting, berry-picking and fishing camps with similar purpose.

Part of a larger outreach program

The camp is one branch of a larger culture and language-outreach program that includes adults in the Red Lake Indian community as well. The Chemical Health Program starts offering Ojibwe language classes to staff this month.

The children will be bussed to Ponemah, one of four communities on the reservation, and a village respected for practicing many of the old practices. At camp they will participate in native Ojibwe sports and crafts, eat traditional foods, and engage in traditional spiritual ceremonies and plant-gathering practices.

“The overall philosophy is to re-connect them to nature and inevitably to themselves,’’ explained Larry Stillday, 69, an elder whose grandparents were taken away to boarding skill those many years ago.

“We feel if we can raise people’s self esteem their chance of using chemicals will be less,’’ Barrett said. Self esteem, he said, is all tied up with knowing who you are and having a sense of pride in your heritage, language and culture.

The Ojibwe holdings, which encompassed millions of acres at one time, are diminished and include a reservation of about 637,000 acres of slightly rolling and densely wooded land with lakes, swamps, peat bogs and prairies. There is high unemployment among the reservation’s four communities, though three casinos provide employment opportunities.

“A lot of people are struggling and a lot of people are doing fairly well,’’ Barrett said. Dealing with drug and alcohol abuse is an ongoing problem, despite more than 20 years of some progress through chemical prevention programs in the schools and throughout the community.

A native speaker, Stillday, who lives in Ponemah, will teach not only the language but traditional spiritual practices, including smudging, a cleansing ceremony that involves the burning of sage, sweet grass, cedar and tobacco.

He will tell the Ojibwe creation story and demonstrate and involve the children in gratitude ceremonies performed at planting and harvest.

He and other elders will form relationships with the young people as they teach them Ojibwe everyday phrases such as “What’s for supper?’’ and teach native names for plants.

A hunting camp last fall was also designed to reconnect youth with their people’s tradition. Among other revered practices, youth learned the practice of making tobacco offerings of red willow to the creator for providing deer and to the deer for giving up its life.

The camp turned shy young men and women campers into more self-confident youth, and with that self-assurance came better behavior in school and at home, Barrett says.

The language and culture camp is sponsored by the Red Lake Chemical Health Program, Economic Development & Planning and Boys & Girls Club, and also financed in part with a prevention grant from the Minnesota State Department of Health.

One last thing I’d like to share about my grandma. There was much she prized about her Norwegian heritage, but she left that country determined to never again eat fish if she could help it. She’d had her fill, she said.