I’m all for hearing the other side of the marriage debate to get a better feel for why supporters are inclined to oppose marriage equality.

In a recent letter to the editor of the Duluth News Tribune in support of the marriage amendment, Jason Adkins of Minnesota for Marriage scored three points on the Official Marriage Amendment Bingo Card:

2.  Marriage Has Always Been.

Not surprisingly, it turns out Mr. Adkins touched a nerve, as a trio of news Tribune readers responded to his letter with pretty good reasons for voting No on the marriage amendment.

I do not think anyone decides one day to be gay. Why would someone choose to be ostracized, demeaned or even demonized? People are who they are with unique gifts. Everyone should be given the opportunity to achieve their fullness and not be made to feel less because they are not the majority. Gays are our brothers, sisters, daughters, sons and friends.

On April 6, Geoffrey Witrak of Duluth wrote that “committed, same-gender couples share the same love and commitment we [heterosexuals] all do. . . . Increasing numbers of us are realizing that whenever two adults make a public, life-long commitment to one another, the quality of our communities is strengthened.”

In [Adkins’s] positive choice, it appeared that every marriage made up of one man and one woman works for the “well-being of children and society,” as Adkins wrote. This also is not always the case. There are many examples in history where children and society have been threatened or wounded by married members.

The fact that two gay individuals marry does not threaten my marriage, my society or my children in any way.

Yes, Virginia, people really do read letters to the editor. 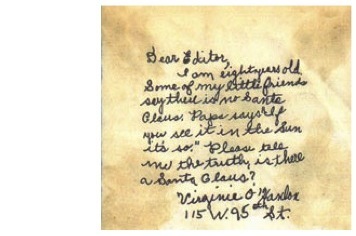 Original letter to the editor from Virginia Hanlon, via Wikimedia Commons.