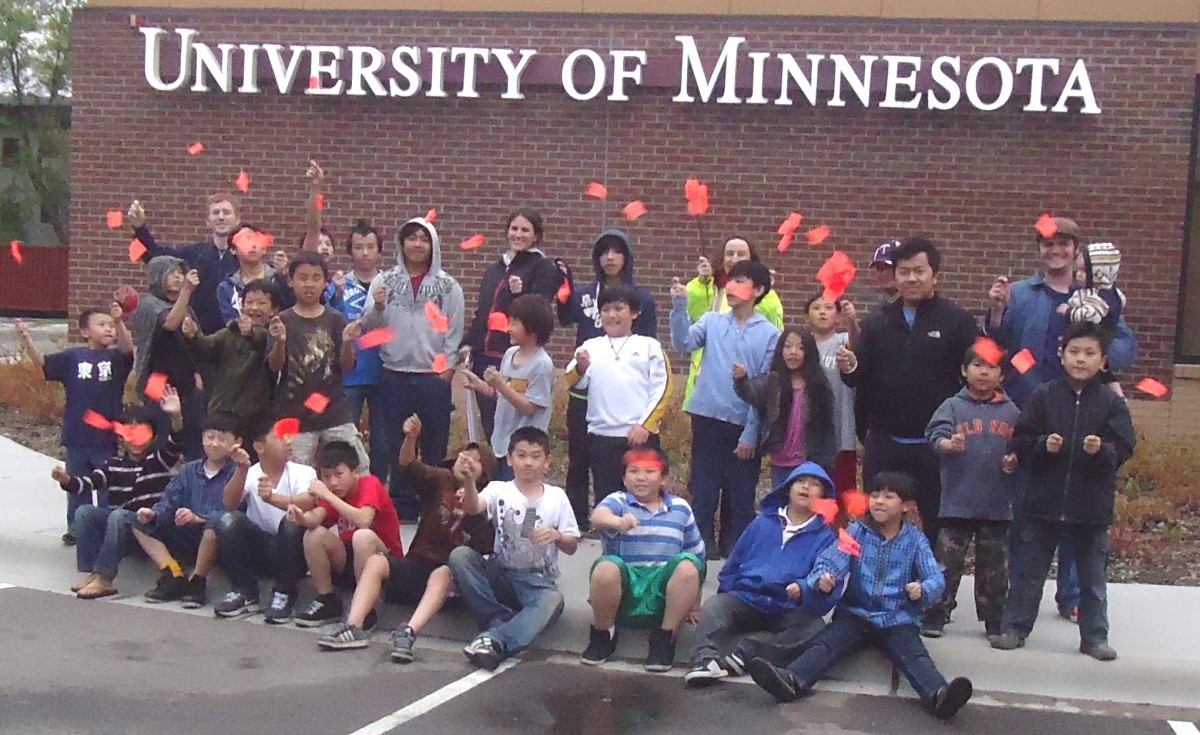 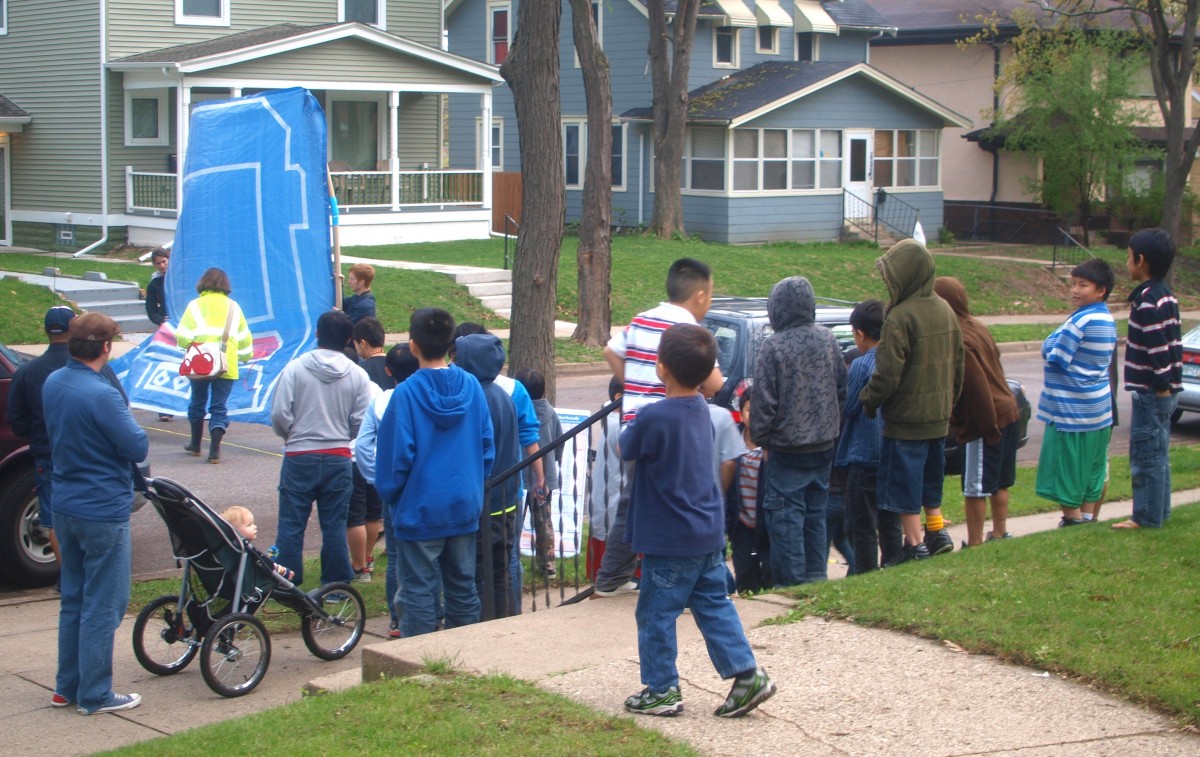 Hmong soccer players look on as University of Minnesota students unfurl a life-size mock-up of a Light Rail Train in the middle of Oliver Ave. N.

Last Saturday afternoon, The Hmong students gathered at the University of Minnesota’s  Urban Outreach and Engagement Center.  An enthusiastic team from the  University  of Minnesota’s department of Landscape Architecture  unrolled large maps, and showed the Hmong students the different possible routes.  The students then boarded vans, and drove on the Bottineau route down Olson Memorial Ave. and past the proposed turns onto Oliver Ave.,  Penn Ave., and the Wirth parkway train tracks. 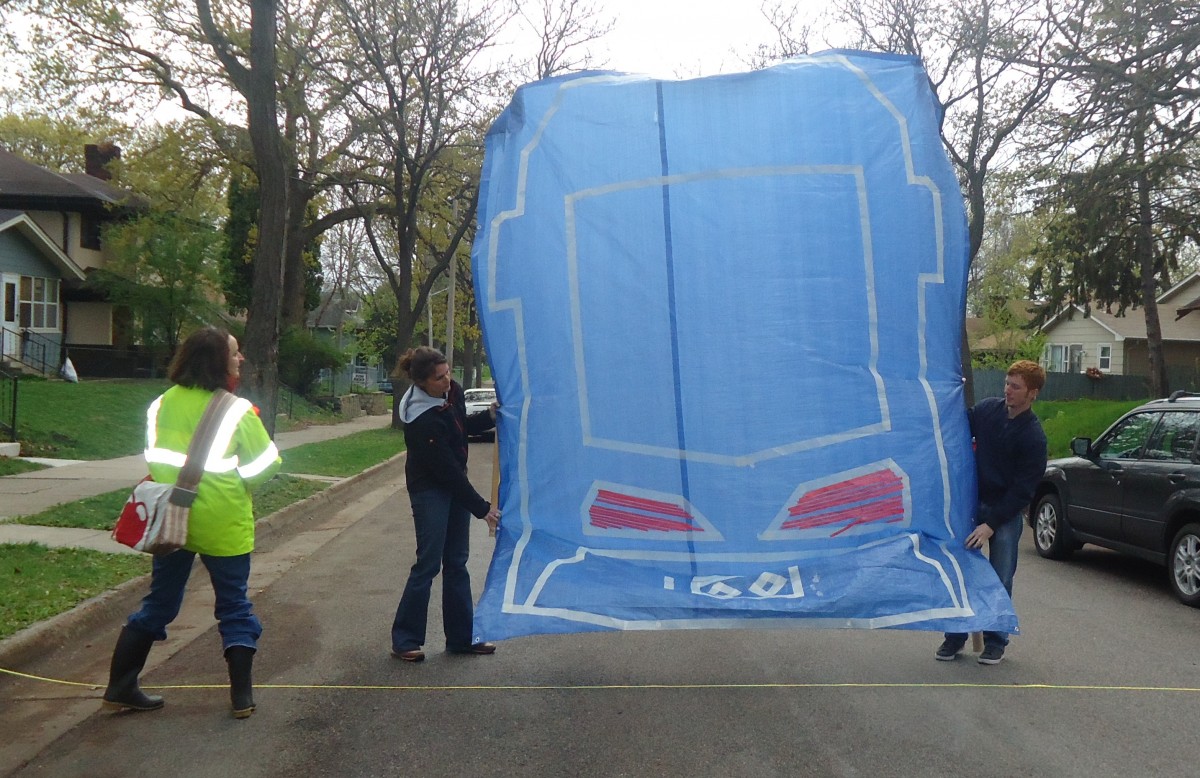 The Hmong students then disembarked in front the Oliver Ave. house of three of the soccer players.  The U of M team used orange flags to mark out the space the LRT may need to operate.    They also unfurled a home-made  full scale mockup of the train, and set it up in the middle of Oliver Ave, to the amazement not only of the Hmong students but of gawking neighbors. 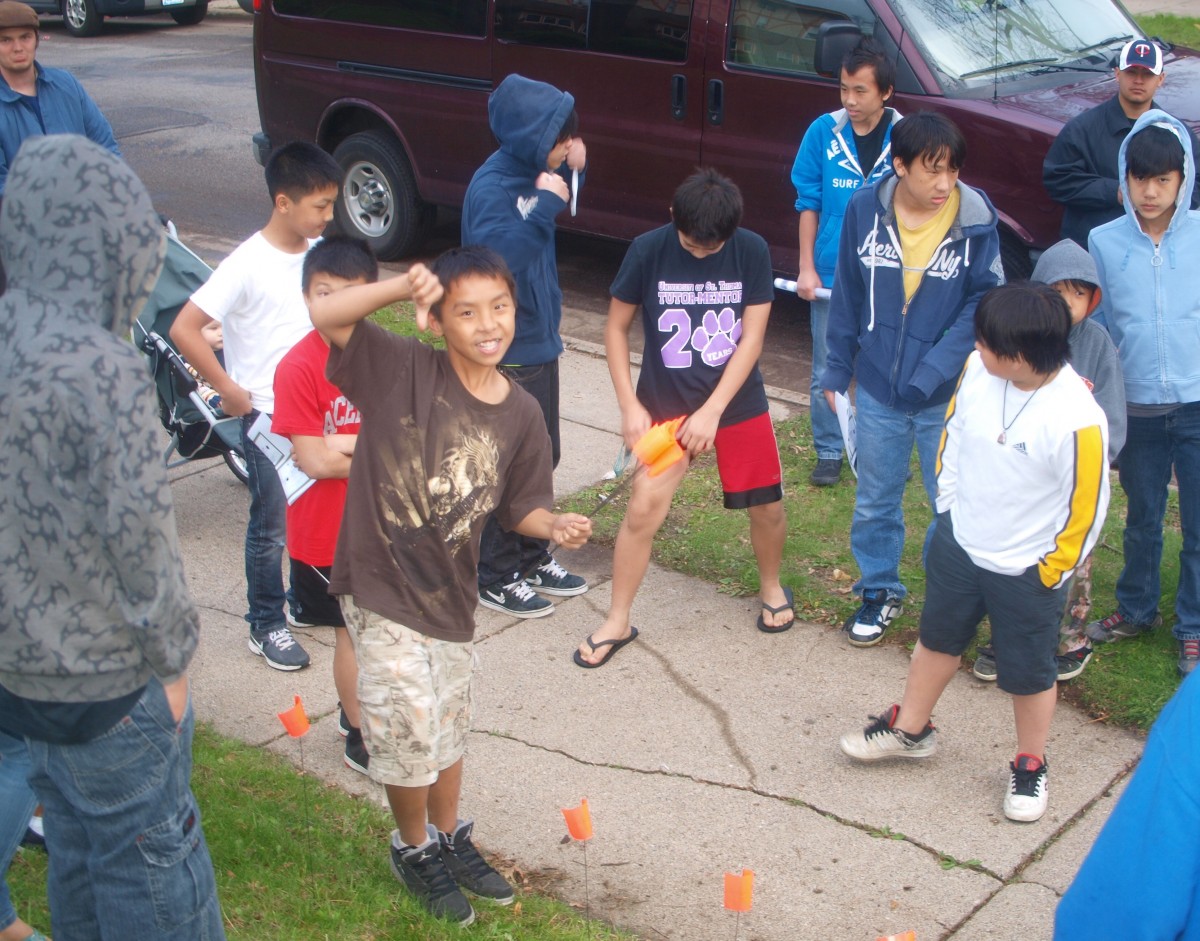 The Hmong students then walked down Oliver and Penn Avenues, as the U of M team explained the possible outcomes of  LRT construction on the surrounding streets and buildings. 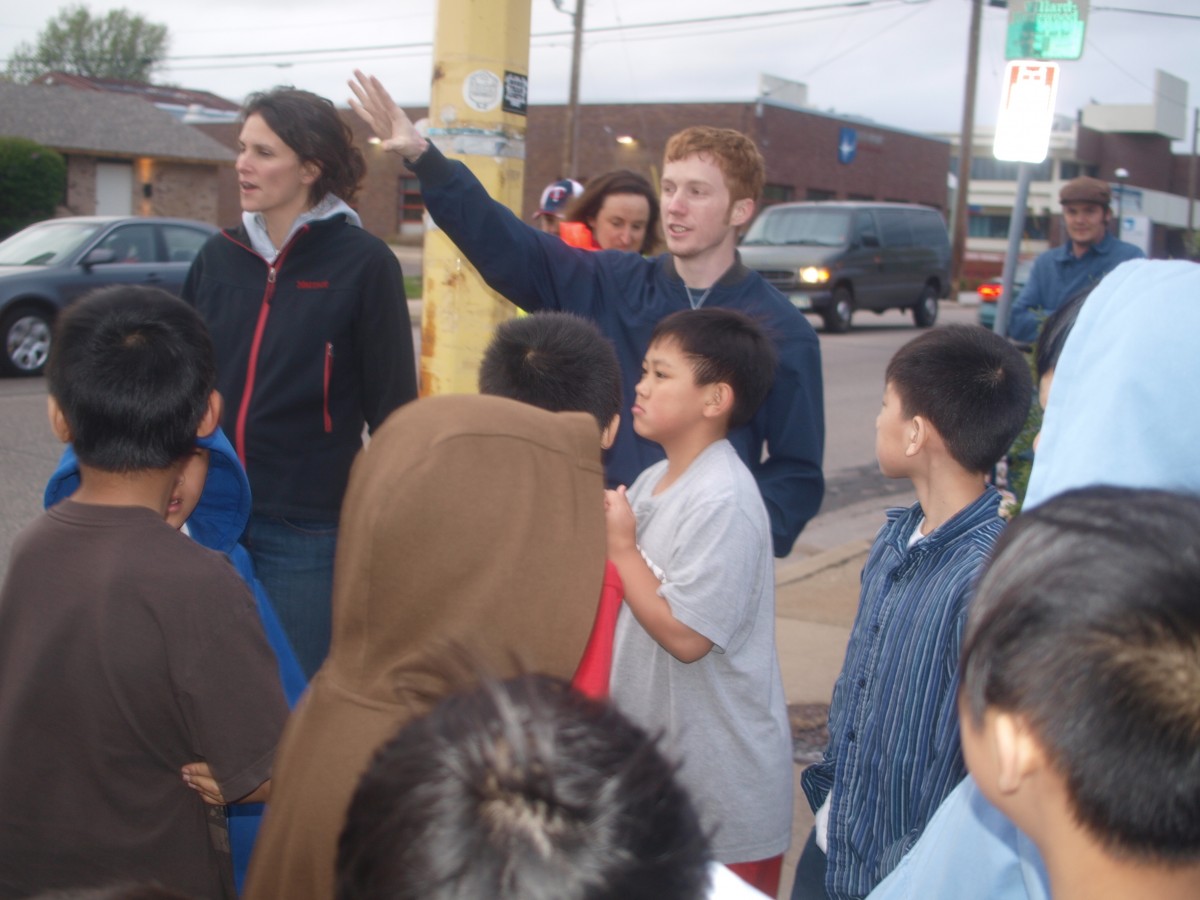 University of Minnesota students Forrest Hardy and Anna Springer explain possible impact of the Bottineau LRT on the Penn and Plymouth Ave. intersection.

Back at the UROC building, the Hmong students then discussed what they had seen, and voted on their preferences for the proposed Bottineau LRT. 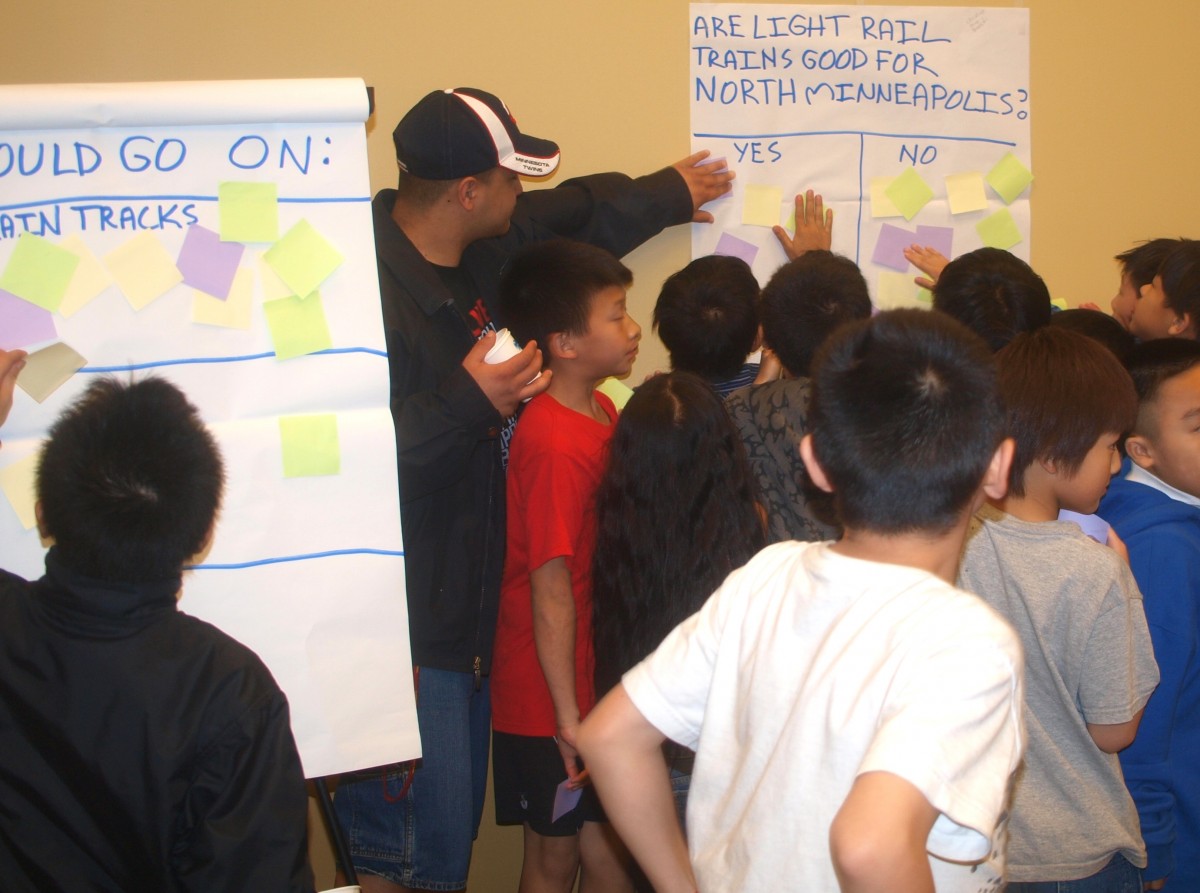 Hmong students vote their preferences  for the Bottineau LRT

The students were first asked to vote on whether they thought that light rail trains would be good for north Minneapolis.

The Hmong students then voted on which route they preferred if the Bottineau LRT was built in north Minneapolis.  19 voted for the Wirth train track route, 5 voted for the Penn route, and 0 voted for the Oliver route.

Reasons some  Hmong students voted that light rail trains are good for north Minneapolis include:
*Easier to travel
*Easier to go to Mall of America, school
*Save gas money
*Don’t have to buy a car
*Can visit your girlfriend

Reasons some  Hmong students voted that light rail trains are not good for north Minneapolis include:
*Too dangerous
*Houses knocked down, losing street and parking
*Construction and trains too noisy
*Will take a long time to build
*Crime
*Lose too many trees

Reasons why some Hmong students preferred the Wirth train track route include:
*Won’t destroy houses
*Won’t get in your way
*Won’t be noisy
*Won’t be dangerous
*Less crime

Reasons why some Hmong students preferred the Penn Ave. route include:
*More people will ride the train
*Lots of people won’t have to ride buses
*Ease auto travel
*Less dangerous

Two months before the Bottineau tour, the Hmong students living on Oliver Ave. North and their family had voiced their concerns to a Twin Cities area reporter. They have twelve family members and a 15 passenger van.  They did not know about any proposal to put LRT on their street until they were told by a neighbor.  If the LRT goes up Oliver Ave., they would lose their street, their parking, and the train right-of-way could take out their sidewalk and some of their front yard.     They expressed concerns for the safety of their family, the noise, where they would park their 15 passenger van, the width of the trains and the construction zone, and the noise and mess and danger from the construction. They said that if the train went up Oliver Ave. they would want to be bought out and move.  However the Oliver proposal to put the LRT on Oliver Ave. does not buy out their house. 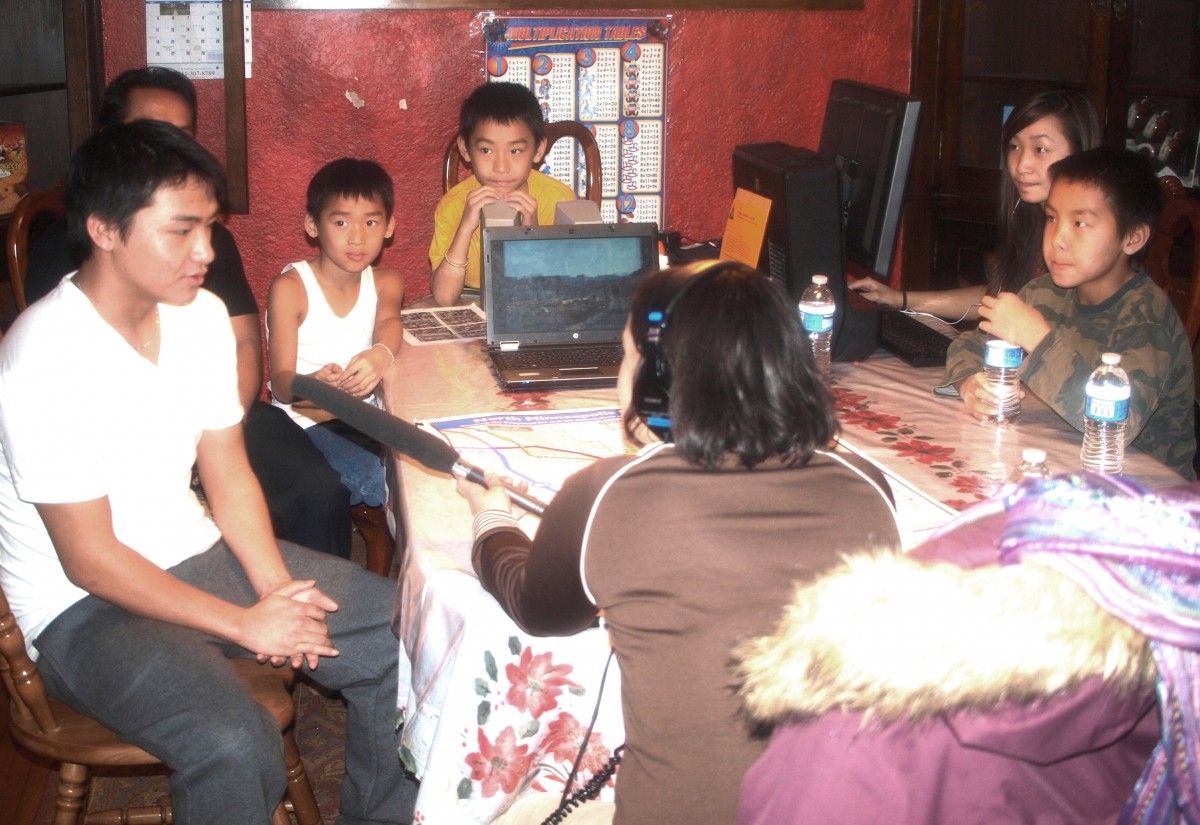 This Hmong family lives on Oliver Ave. N., and expresses their worries of what happens to their home and their family if the Bottineau LRT goes up Oliver Ave. N. 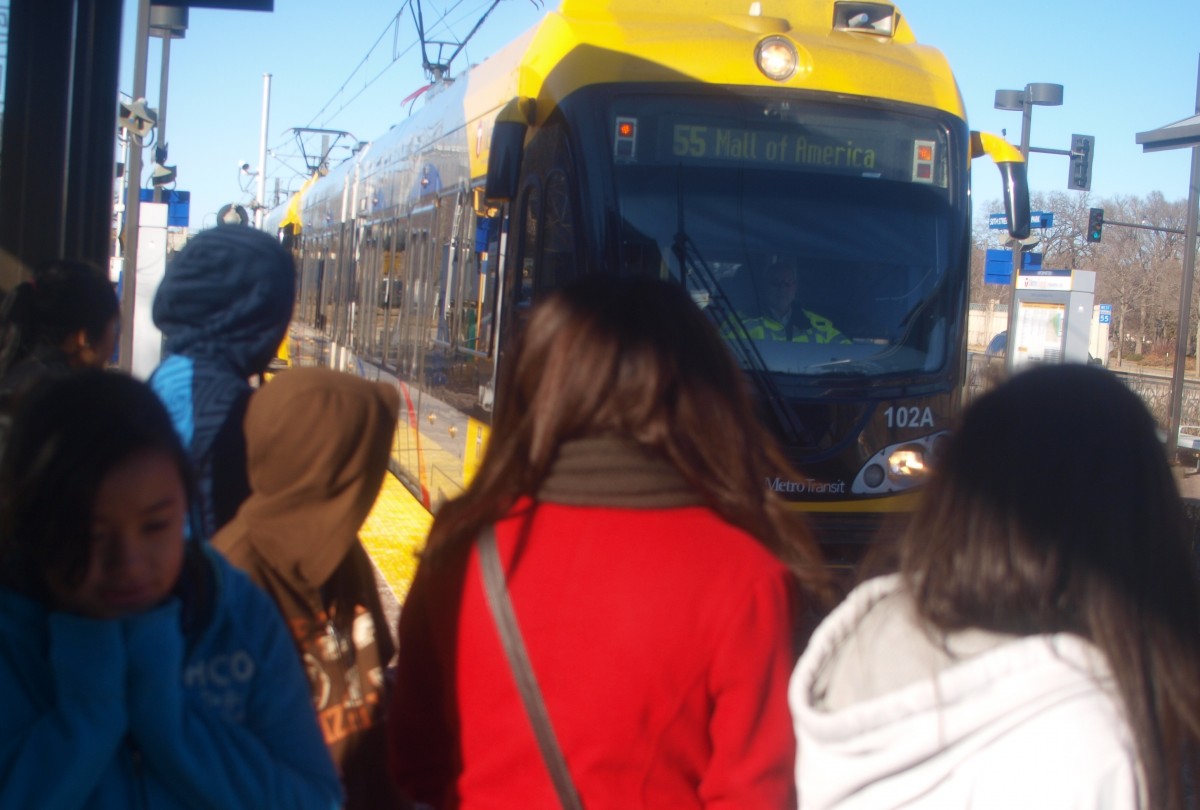 The fact that the vast majority of these Hmong families do not use mass transit may help explain their votes.  Because few of these Hmong families use mass transit, they see as minimal any benefits they will get from LRT in north Minneapolis.  However, those living close to – or on – the proposed routes worry about the noise and disruption caused by the construction and operation of light rail transit, along with the possible loss of buildings and parking and streets. 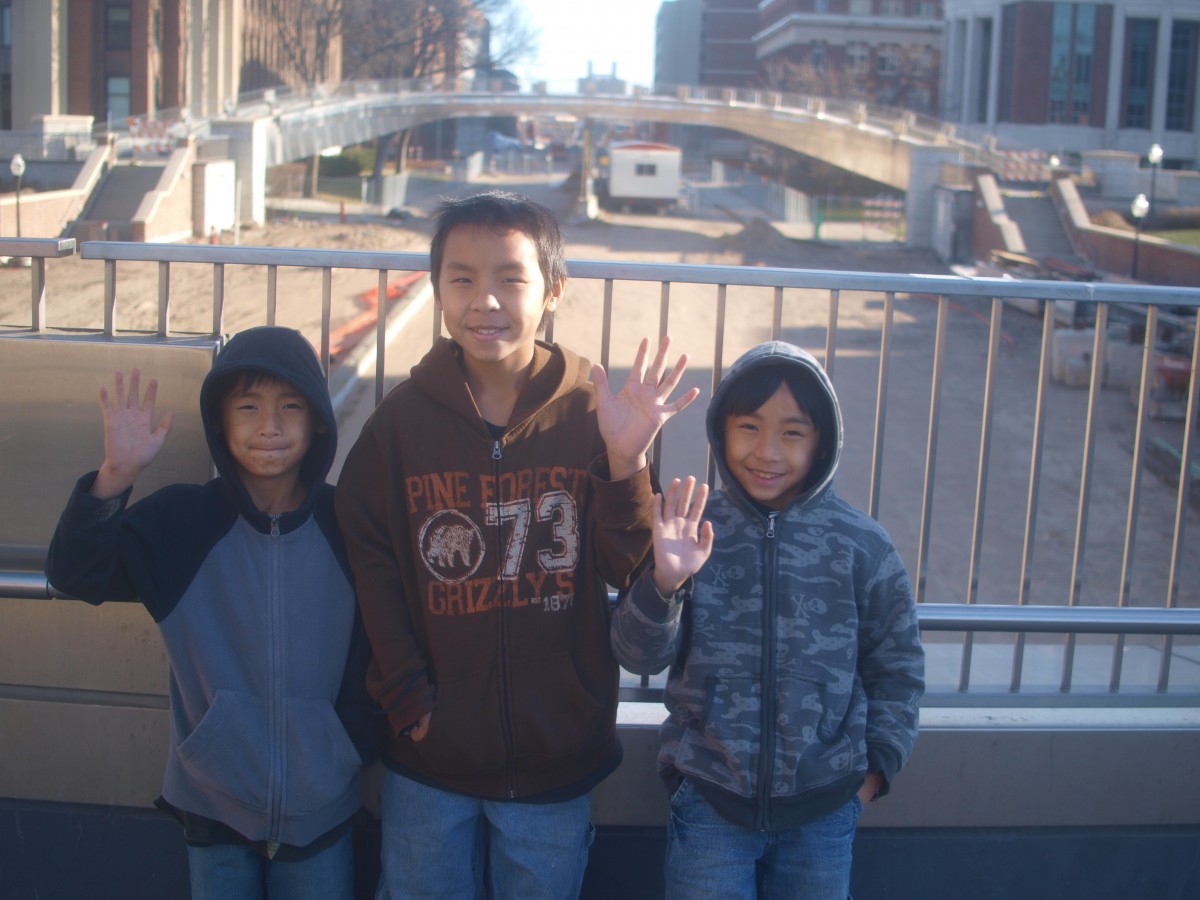 Hmong students inspect Central Corridor construction zone on Washington Ave.  They live on Oliver Ave. N., and worry that this scene will be repeated in their front yard in a few years if Bottineau LRT goes up Oliver Ave.

Using visual and experiential activities may help  involve other constituencies that have not been heard from enough in the Bottineau LRT process.

Thanks to professor Kristine Miller and students Anna Springer and Forrest Hardy from the University of Minnesota Department of Landscape Architecture/College of Design for their creative and enthusiastic contributions to helping the Hmong students visualize and understand the Bottineau LRT proposal for north Minneapolis. 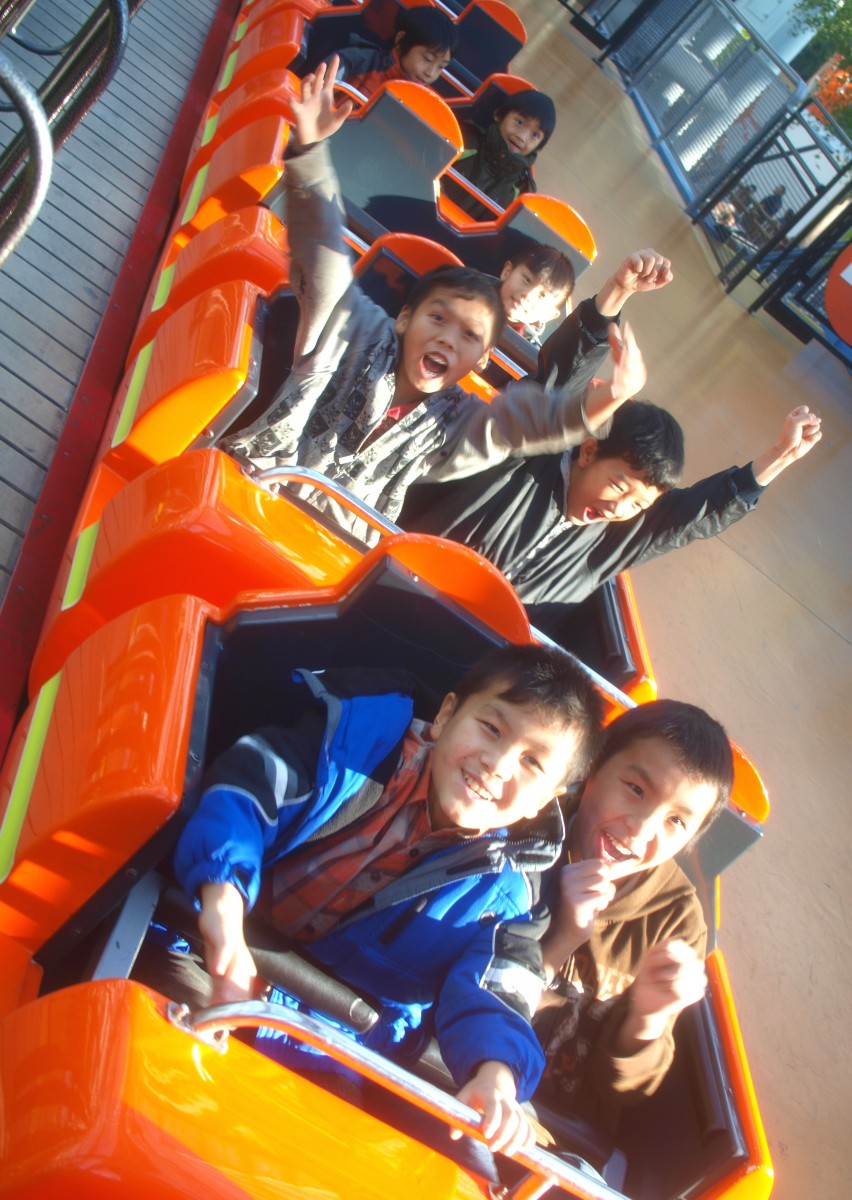 Hmong students enthusiastically endorse this version of Light Rail Transit, after careful research conducted at the Mall of America 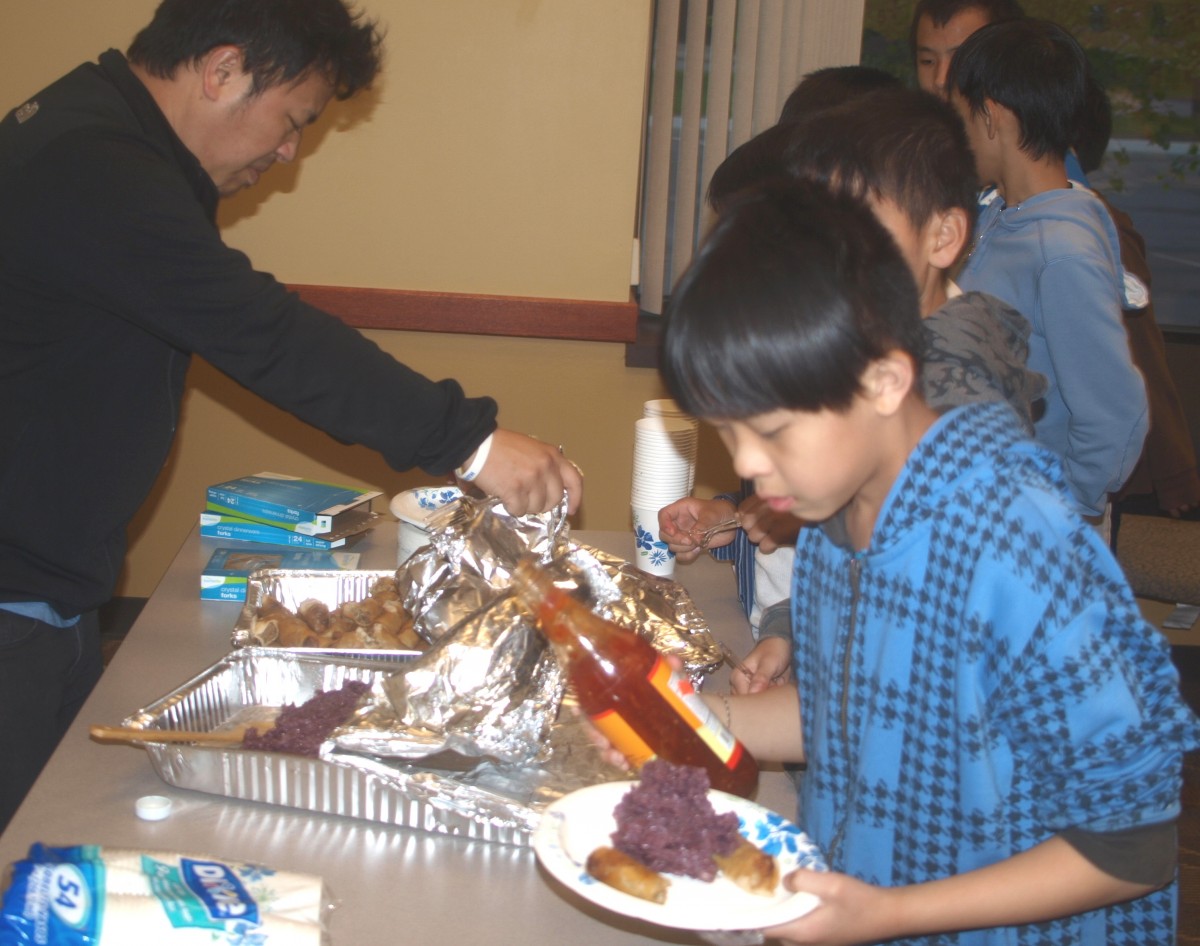 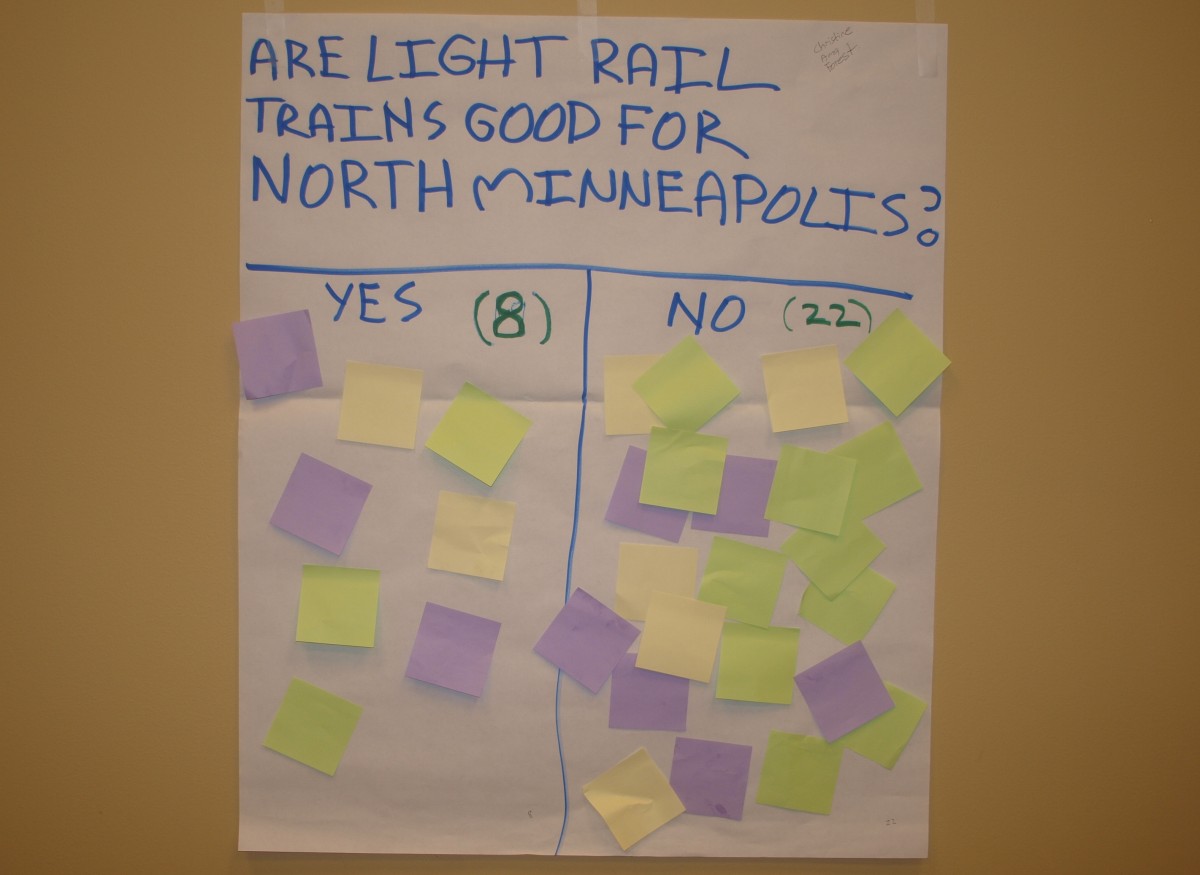 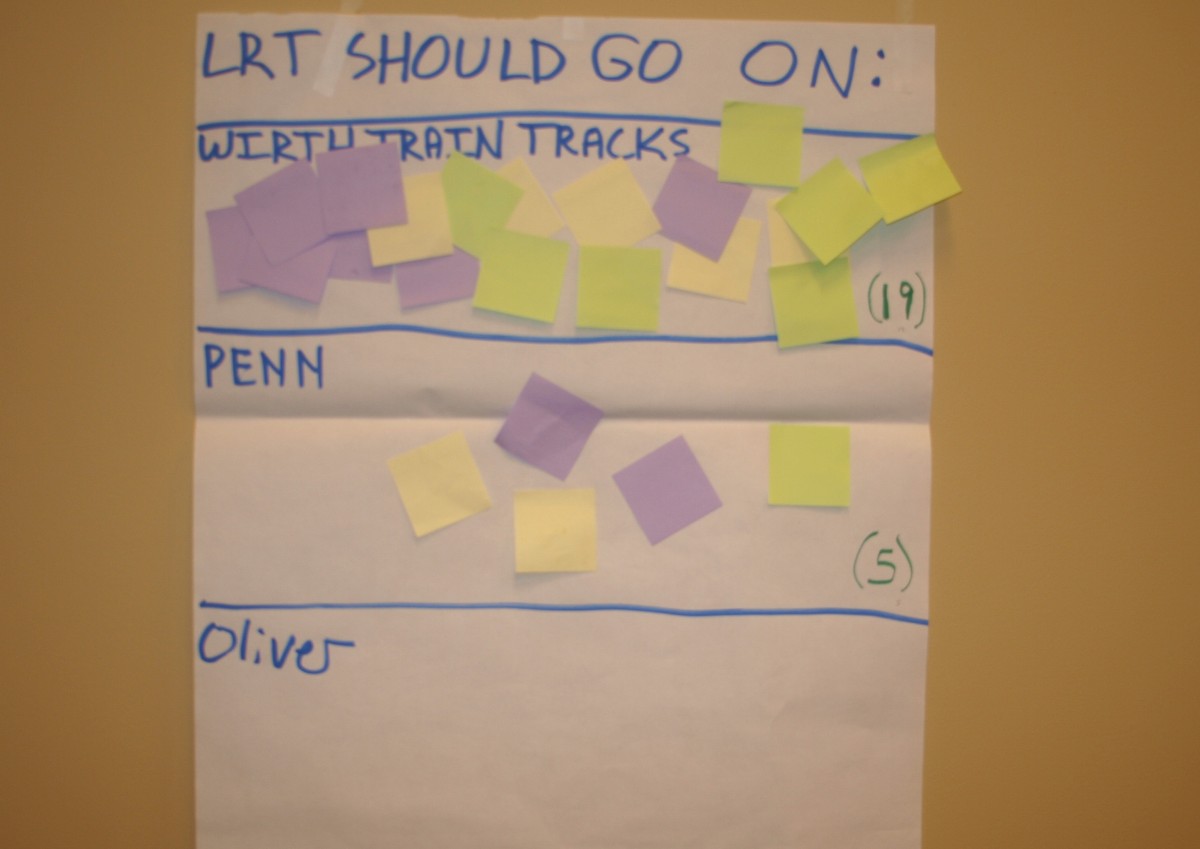