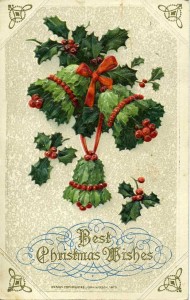 Peace and all best wishes for a wonderful Christmas season and a Happy New Year in 2011. If you wish to participate in a meaningful remembrance this season, note my post at this blog for December 16.

Every year since 1977 I have crafted my own Christmas Card. Each year, something “catches” me and becomes the focus for that year.

This years message is about “community” and how it entered three lives, years ago. My message has a history, literally, which began for me about 49 years ago, and which began again in November, 2007, when I dropped off some materials at the Fargo (ND) Forum about my brother-in-law Mike, who died Nov. 7, 2007, in a Fargo hospital. Larry Gauper of Fargo picked up the story in November 2010, culminating in a blog post about his friend and Valley City, ND high school classmate, Mike’s sister Barbara, who was my first wife. His post is entitled “Remembering a classmate and friend.” I became a close collaborator in Larry’s project.

Barbara and I were married slightly over two years, till she died of kidney disease at University of Minnesota Hospital July 24, 1965.

Barbara was desperately and, it turned out, likely terminally ill during our entire marriage. We married when I was 23 and she 20; at age 22 she was dead, leaving behind a son age 1 1/2, and a stunned family. Neither of us had any idea, when we were dating, then married, that our “Ken and Barbie” (as Larry described us) view of the future would have no chance of being fulfilled.

Innumerable people have experienced what Barbara and I did so many years ago. We were not unique.

I can imagine our experience as analogous to being caught in a whirlpool and desperately trying to escape. Everything was supposed to be normal, but nothing was…It takes a while, but sooner or later you know that you’re just not going to escape.

Barbara died in an intensive care bed at the University of Minnesota Hospital, on the 8th floor if I remember correctly.

Here’s where the “thousand thank you’s” enter the picture.

The unplanned re-visiting of events of over 45 years ago had an unexpected impact on me.

I began to think of all of the people who in one way or another participated in helping us get through those very confusing and difficult days of 1963-65.

At one point, I thought of trying to list everyone, here. But I dropped the idea: there are far too many, and besides, I would forget some who richly deserved thanks. A great many of them have long ago passed on themselves; many have disappeared from my radar — moved, etc. There are large numbers of them whose name I never knew, or who I never even met. All of these are the “thousand” I refer to in the subject line.

We never did have an opportunity to thank them at the time. I doubt we thought about it — we were trying to survive, after all, and expressing gratitude is a luxury not readily available to those in constant stress.

So, here’s an attempt to at least thank those who were there when we needed them. While we tried to survive, they offered us endless varieties of helping hands.

In no particular order:

Our families and friends, yes, especially those who kept Barbara “under their wing” in the hardest times. Thank you.

Babysitters who took care of our son, Tom, when Barbara couldn’t, and I was working. Thank you.

Work colleagues, school administrators, landlords, legions of medical staff in many clinics and hospitals. Thank you.

Marion and Louis Smart, then of 1615 S. Ferry, Anoka, MN, who took Tom and I in the tough first year after Barbara died, and who I’ll likely again hear from this Christmas. Tom’s crib in their home was his “manger” in 1965-66! Thank you.

To Mitsy Polman, then of Spring Lake Park, MN, who, the following year, babysat Tom along with raising her own kids. Many years ago the Polmans moved. I don’t know where. Thank you.

To the Irbers, who were very often a life raft for me in the toughest of tough times. Thank you.

The greater community, represented by the hospitals and clinics who took Barbara on as a patient, even though they knew we had no insurance and would likely never be able to pay the bill. Thank you.

To North Dakota Public Welfare, who paid most of the discounted cost for Barbara’s 58 final days as a patient at University Hospital in Minneapolis. Thank you.

Extraordinary special thanks to those who lent a helping hand, small or large, even if there was no reason to extend that hand.

I would wish on no one what we went through, especially what Barbara went through. On the other hand, one gets a new appreciation of what that little word “community” really means. It is ALL of us, whoever we are or wherever we live.

Thank you all. What little I can give back, I will.

Footnote: The first paragraph of this writing refers to my post for December 16, which in turn refers to a memorial on the first anniversary of the devastating earthquake in Haiti. At our first committee meeting, one of the members suggested as a central piece of text John Donne’s Meditation XVII, commonly known as “No man is an island.” It seems to fit particularly well with this reflection.