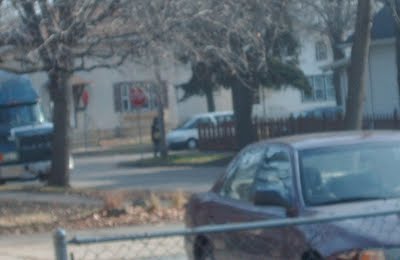 A couple days ago, a friend and I were at the house near the Jordan Pond when we saw an amazing sight from the living room window. A young man dressed in an M&M jacket was walking down the street and urinating at the same time. If you must know the clinical details, he sort of angled the urine stream off to the left so he wouldn’t walk in his own puddle. And, yes, he was walking forward; not backward.

It’s hard to estimate the water pressure, but I’d say he had about a three-foot stream going at his max.

And he was just walking like that, oh-so-casual, not stopping or making use of any urban ground cover to hide his bodily function; like ambulating and urinating at the same time was as common as walking and chewing gum. I managed to snap a picture when he was a good ways down the street.

We called the police, of course, and you might think “the ambulatory urinator” could have been tracked down easily enough, but somehow he managed to elude authorities and (one suspects) continue his crime spree.

And, really, in a sense it’s for the best. I mean, about a year ago I was getting a lot of mileage writing about “The Shitter” who once haunted the alleys of the Eco-Village with his notable habit of taking a dump WHEREVER and using an ENTIRE SHIRT to clean up. But he doesn’t seem to be around anymore, and we’ve completely turned the Eco Village around.

So here we have a new character who suddenly, dramatically appears and then mysteriously disappears into (as it were) the steaming mists of urban legend…