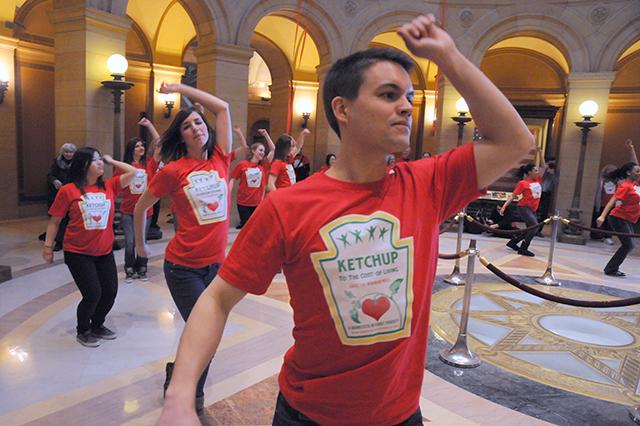 Social-work department staff and students from St. Catherine University and the University of St. Thomas and others performed in the Capitol Rotunda on Thursday. (MinnPost photo by James Nord)

Dozens of people seemingly just wandering through the Capitol rotunda broke into dance Thursday in a smile-inducing stunt designed to draw attention to a serious issue being debated on state and national levels.

Young and older, they shrugged off sweatshirts to reveal flashy red t-shirts making their point: “Ketchup to the cost-of-living. Raise the minimum wage,” all while legs and arms moving in time to “Seventeen Years’’ by Ratatat.

Surprised onlookers gaped and smiled, though the media — tipped off ahead of time — had their cameras primed.

Behind the fresh approach — variously called a flash mob or smart mob event — stands a group called A Minnesota Without Poverty, a college student who “grew up in poverty” and a 17-year-old choreographer.

“Does poverty need to exist? We think not,” said Caitlyn Wright, who described growing up in a 16-by-22-foot house in St. Louis Park where her “bedroom was a bottom bunk” and “mac and cheese’’ was frequently the meal du jour.

“We like to engage people in a fun way and to use humor to talk about more serious issues,” said Wright, 26, who headed up the stunt for the nonprofit while juggling classes at the St. Catherine University where she is a social work major.

Across the nation 13 states are raising the minimum wage in 2014.

Last year Minnesota legislators in both House and Senate voted for an increase in the state minimum wage of $6.15, though they couldn’t come to terms on the amount. This year, Gov. Mark Dayton and House Democrats are calling for a $9.50 per hour minimum while some senators advocate for $7.75 per hour. In his State of the Union address, President Obama urged paying $10.10 per hour.

Dance student Daonna Lewis, 17, who lives in St. Paul, put the steps behind the argument that raising the minimum wage is one way of giving low-income persons the step out of poverty they need to change their lives. Her fellow dancers included social-work department staff and students from St. Catherine University and the University of St. Thomas and others. 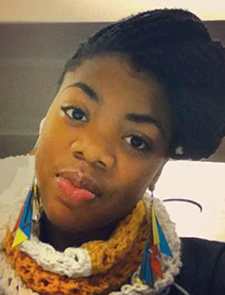 Lewis says she’s proud to be the “face of A Minnesota Without Poverty through dance.’’ She says she has several high school friends who are working minimum wage jobs at restaurants and recreation centers to better themselves or earn money for college.

“I think the organization is wonderful because they’re trying to help better people,’’ said the junior, who majors in dance at St. Paul Conservatory for Performing Artists and already has an impressive professional resume.

“Any time you put music on, she was moving,’’ from a very young age, recalled her mother, Dana Jefferson, who works for Travelers Insurance in St. Paul, so at age 7 the girl joined the Praise dancing group at Pilgrim Baptist Church in St. Paul, her church.

“The easy stuff came real easy and the harder stuff came way easy. She just kind of stood out,’’ her mother said, listing her daughter’s blossoming dance resume, including performances at her church and for other groups and acceptance to a six-week summer program in 2013 with Alvin Ailey in New York City. Besides taking dance at her high school, she studies and teaches at TU Dance Center in St. Paul. 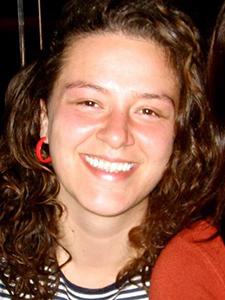 Ballet, modern, hip-hop, jazz, it’s all in her repertoire, Daonna says, adding she hopes there is a wage hike because she has friends working part-time jobs in food service and at recreation centers to help pay their way to college.

Opponents of a minimum-wage increase argue it could lead to the loss of jobs and point to a recent report from the nonpartisan Congressional Budget Office. The CBO says a $10.10 minimum wage would lift 900,000 people out of poverty and raise wages for 16.5 million workers but could endanger 500,000 jobs.

A Minnesota Without Poverty bills itself as a statewide movement to end poverty by the year 2020, a date set by the bi-partisan Legislative Commission to End Poverty in a 2009 report.