A kid who is sick and tired and hungry and scared isn’t ready to sit and learn, child advocates say. And that’s all too often the plight of Minnesota’s poor kids.

Now members of the state’s new Children’s Cabinet, a collaborative effort with members from three state agencies, hope to help those kids in new and more effective ways.

Too many of them are not getting all the help they need to succeed, representatives of the state departments of education, health and human services acknowledged at a meeting called by the Minnesota Children’s Platform Coalition, whose members applaud the state’s efforts to better the welfare of its youngest citizens.

In a way, the department folks were preaching to the choir, some attendees said.

“It’s encouraging to hear the information and statistics that advocates have been using for many years being expressed by the administration,” says Marcie Jefferys, policy development director at the Children’s Defense Fund.

Child advocates have long been concerned about the effects of high poverty rates and racial disparities on children, as well as the lack of collaboration and cooperation across state agencies and a lack of attention to early childhood efforts, she says.

Still, maybe now there will be some movement to change. 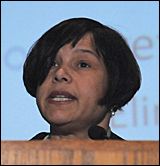 Cassellius ticks off sobering stats: 15 percent of Minnesota’s children live in poverty, 60 percent of them American Indian, 42 percent of African-Americans, 33 percent of Hispanics, 10 percent of Asians and 8 percent of whites. “Our achievement gap mirrors the exact same numbers,” Cassellius said.

“Our disparities are really alarming,” agreed James Koppel, deputy commissioner of the state Department of Health in an interview after the event. “Some people say it’s because the white population does so well and that’s true, we do.”

But there is a huge difference between white children and children of color in Minnesota that puts the state near the bottom, he says. “Serving children of color, compared to other states, we are doing very poorly.” You see the evidence in poverty rates and graduation rates, for instance, he says.

He referred to studies that demonstrate that adverse childhood experiences affect a child’s brain development, especially under the age of 5 when a child is a sponge for knowledge. Poverty, drug use and violence in a child’s family correlate negatively to a child’s life outcomes.

In other ways too state programs are failing kids. Six thousand children remain on waiting lists for child care programs, according to Erin Sullivan Sutton, assistant commissioner of the state Department of Human Services. “There is money there that is not getting to the families that need it,” Sutton said.

Authorized during the summer Legislative session, the cabinet is designed to get the three social welfare departments working more closely together for the good of children, but it is not new. Another Children’s Cabinet was set up in the early ’90s under former Gov. Arne Carlson. The state has also established an Office of Early Learning.

So far, current cabinet members report, they collaborated on the state’s Race to the Top application for federal funds. But they expect to have program improvements and other recommendations ready early next year.

What’s needed is a clear vision, Cassellius says. “We need a state compact, a big goal, something that everybody buys into…no matter who is governor, who the commissioners are,” she said. Applause rippled through the room.

These are economically “challenging” times, Koppel says but suggests, “This Children’s Cabinet can change the way we do business. We can try to get outside the silos and boxes we’ve been in, figure out how to get to the outcomes we want.”