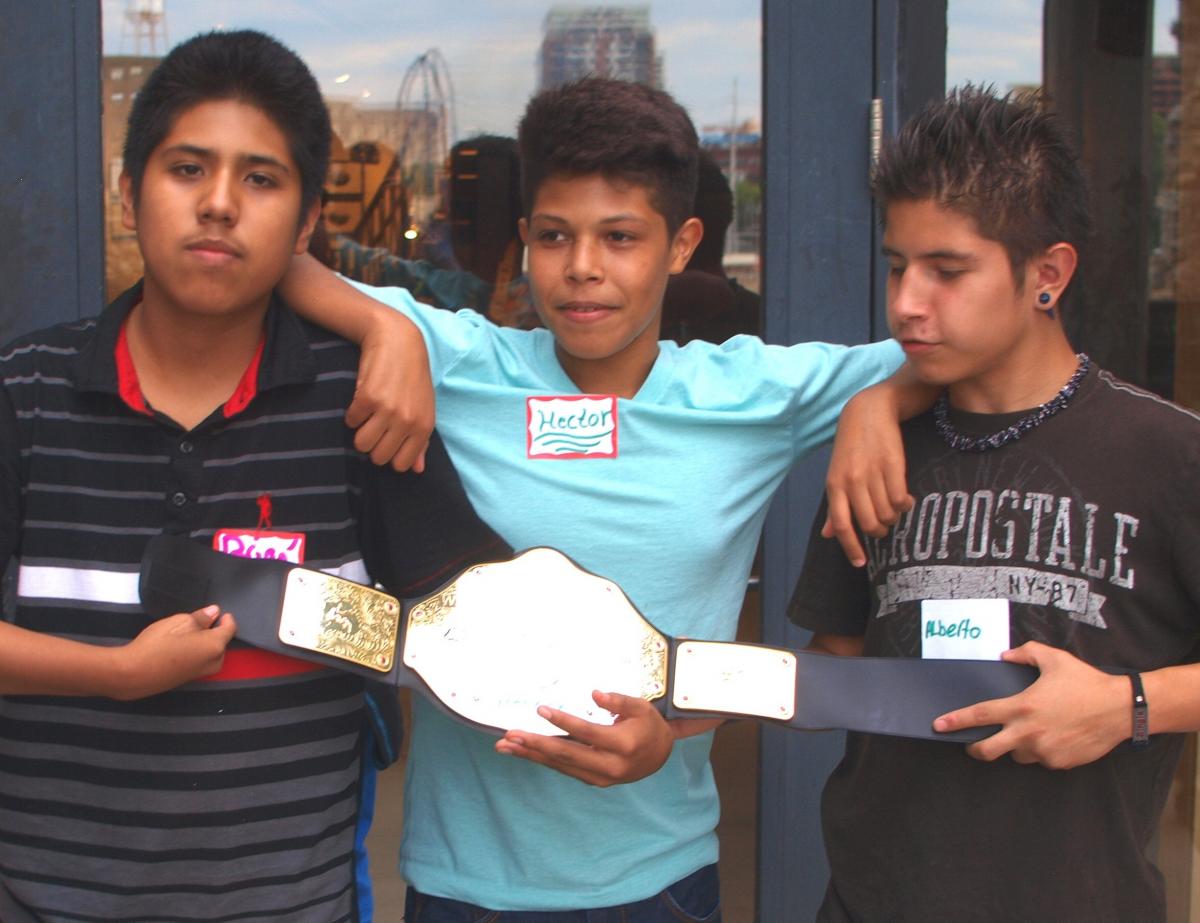 On August 8, the 2013 Neighborhood Smackdown was hosted by and held at the offices of the McKnight Foundation, overlooking the Stone Arch bridge in downtown Minneapolis. 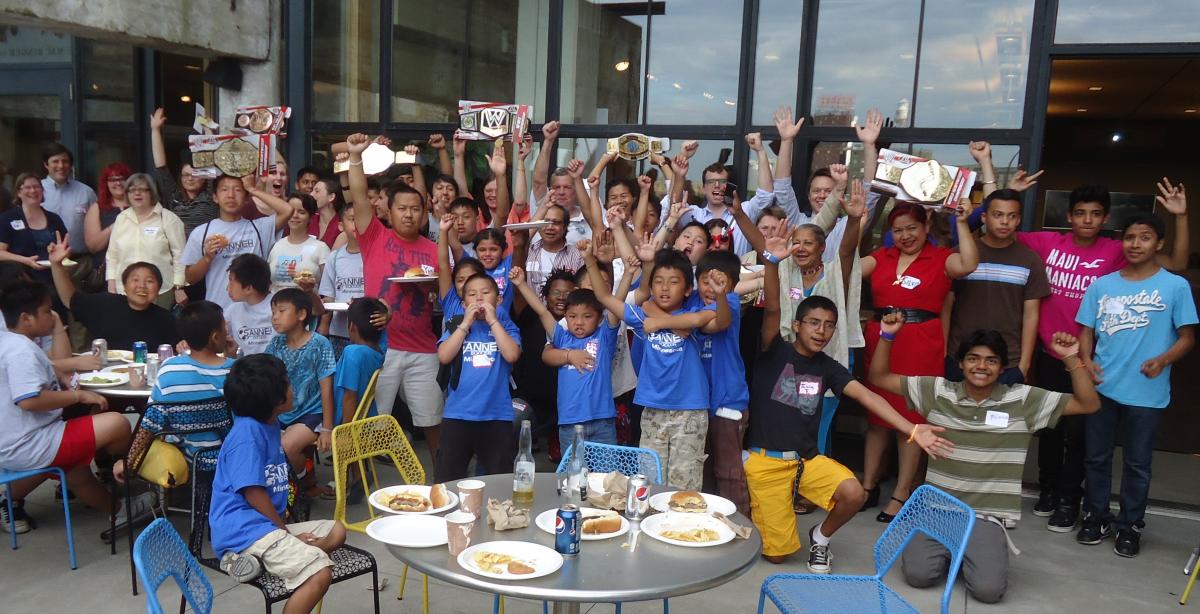 Everybody wins who participates in Neighborhood Smackdown!  Showing off their belts

Each year the Neighborhood Smackdown highlights around a dozen community projects showing both creativity and impact.  This year the projects ranged from one neighborhood’s monarch butterfly festival to another community’s efforts to get  business development at the old MPS headquarters, to a group of Latino soccer players getting a 30 foot mountain of construction debris knocked down. 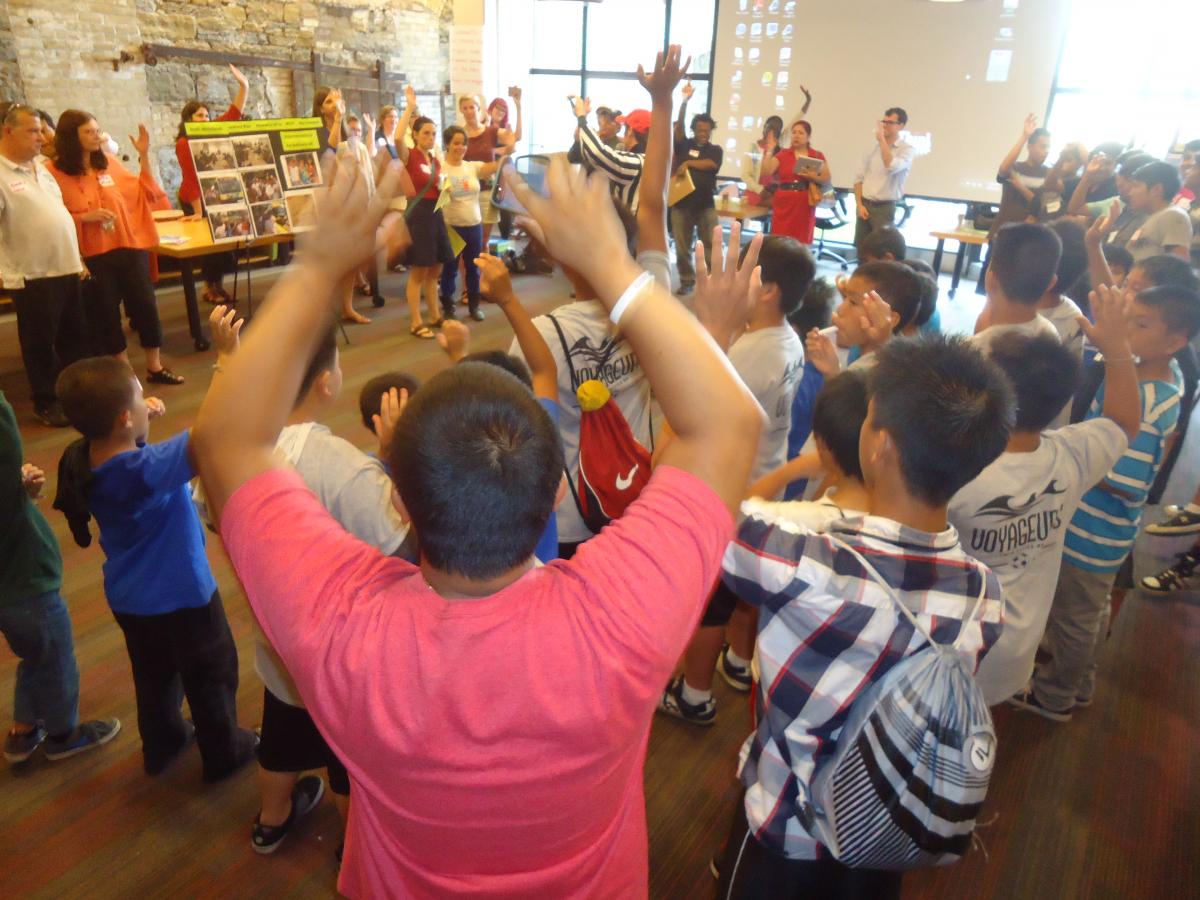 Raise your hands if you help your neighborhood!

Participating groups brought in a visual display of their community projects, and also got two minutes to tell others about their projects.  Those groups daring to go over two minutes were good-naturedly whistled by 30 student community volunteers armed with tooters. 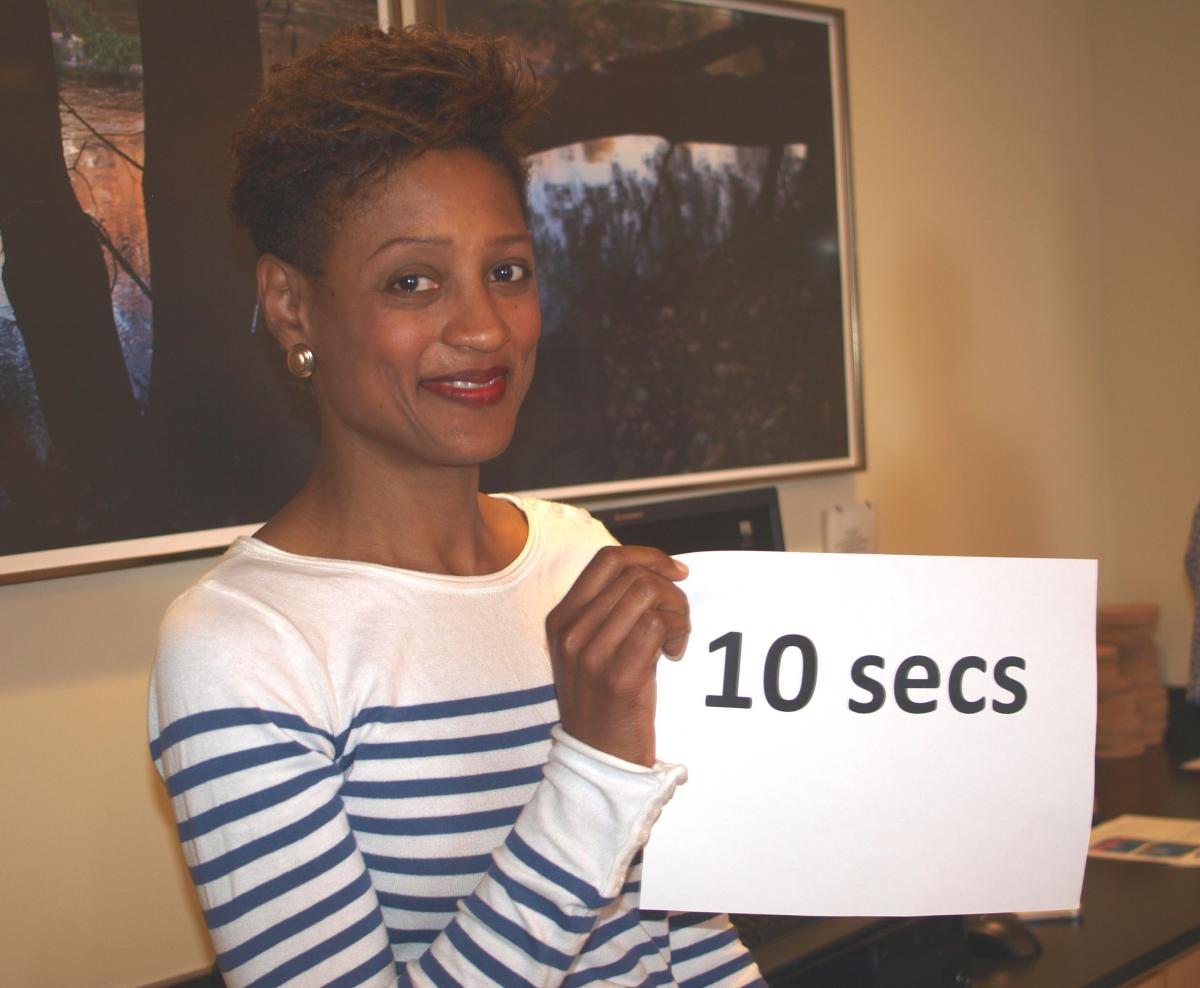 Don’t go over 2 minutes or… 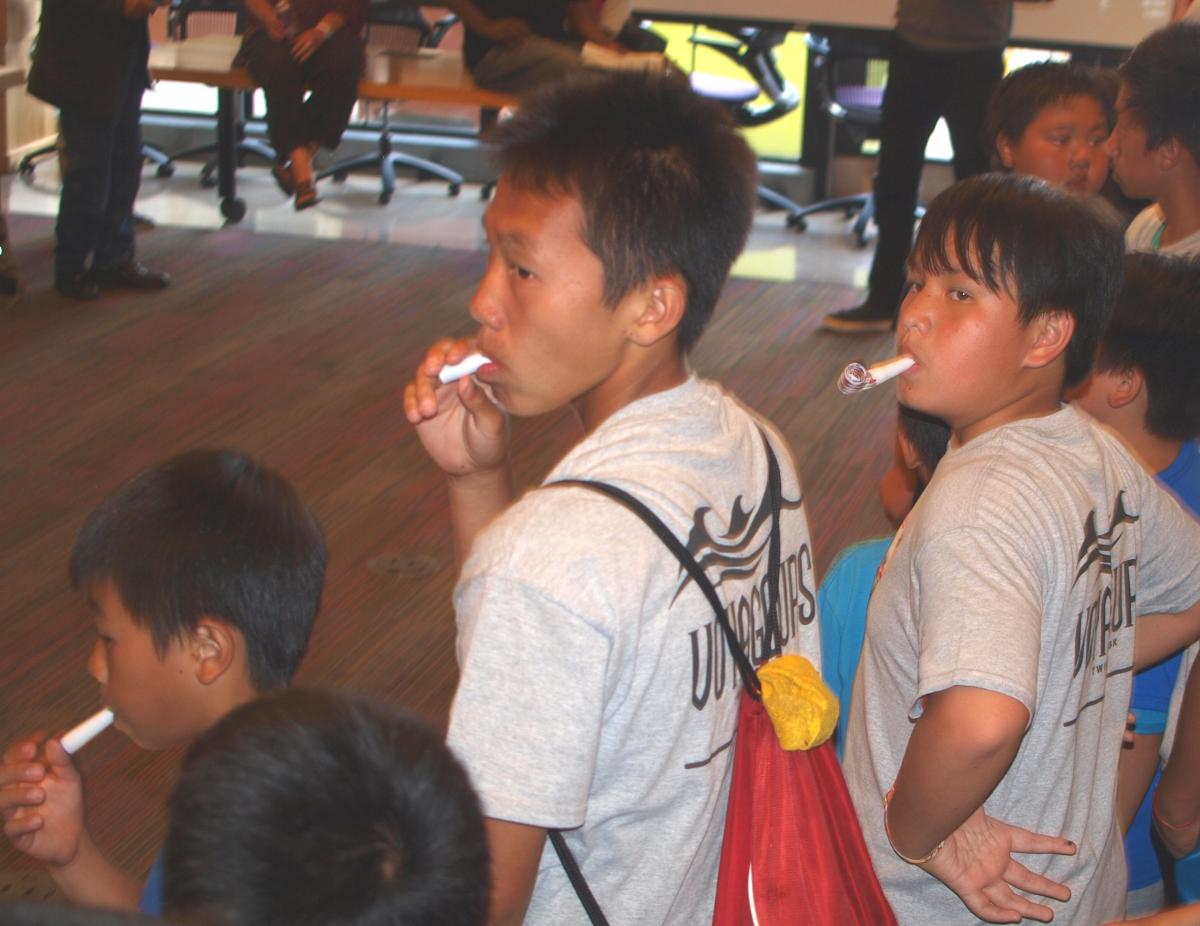 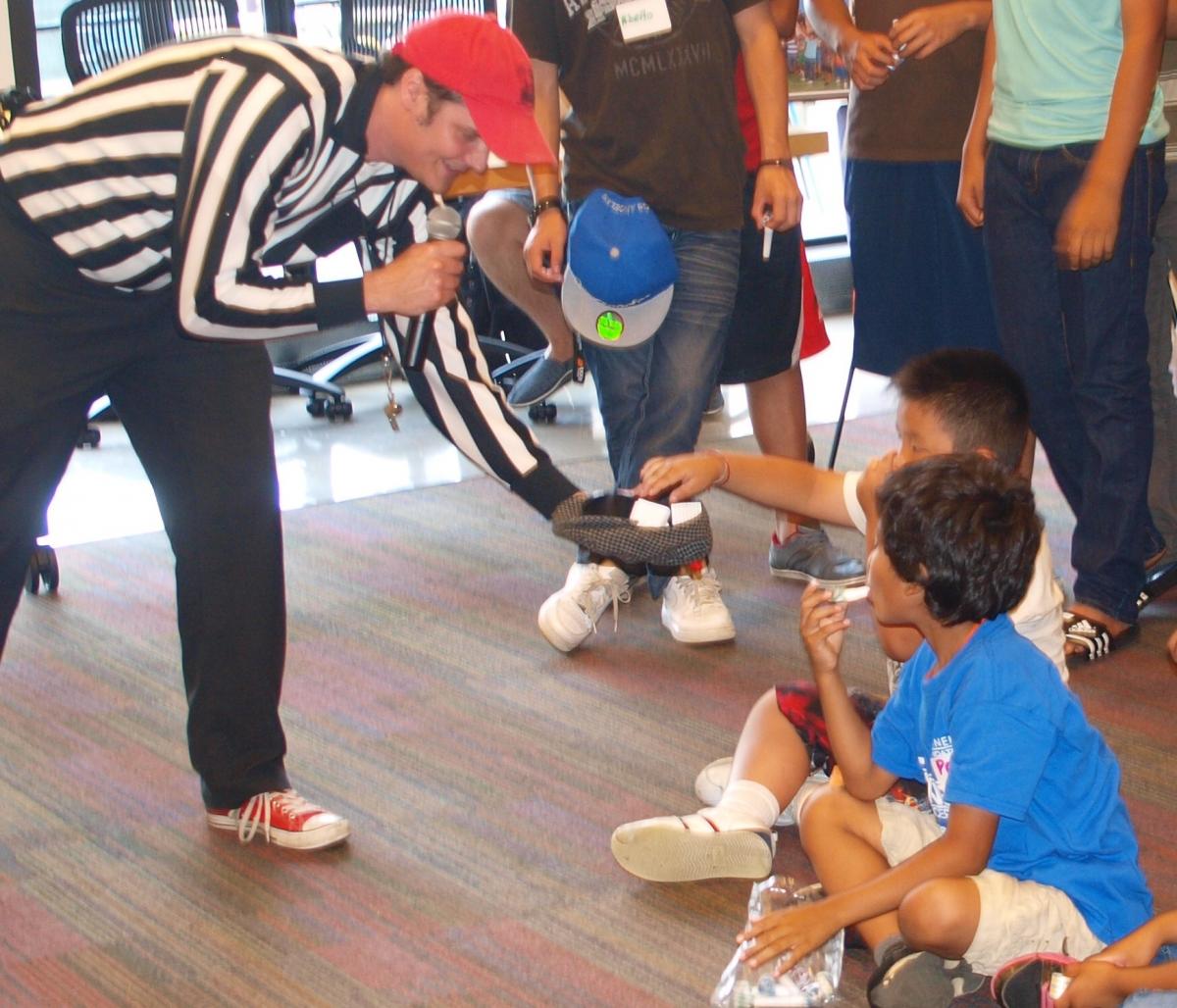 Neighborhood Smackdown referee gets helping hand in choosing next contestant

After the presentation, everybody enjoyed a cookout on the McKnight balcony overlooking the Mississippi river. 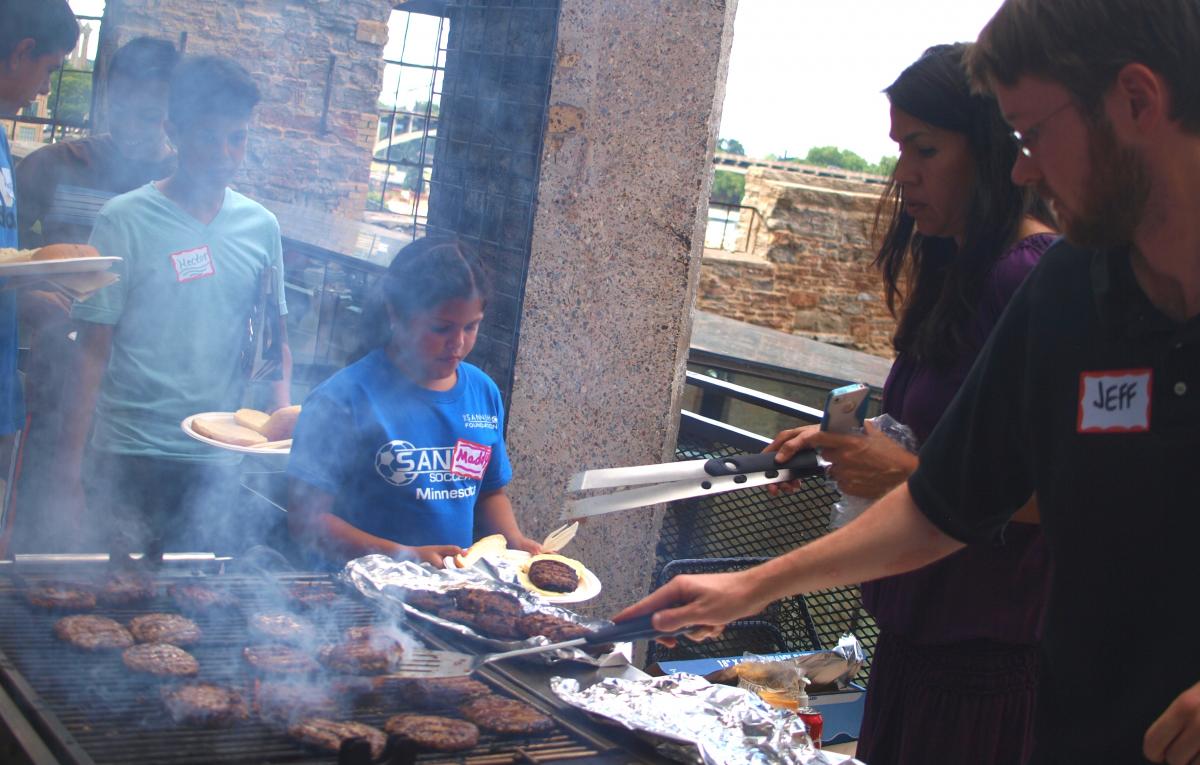 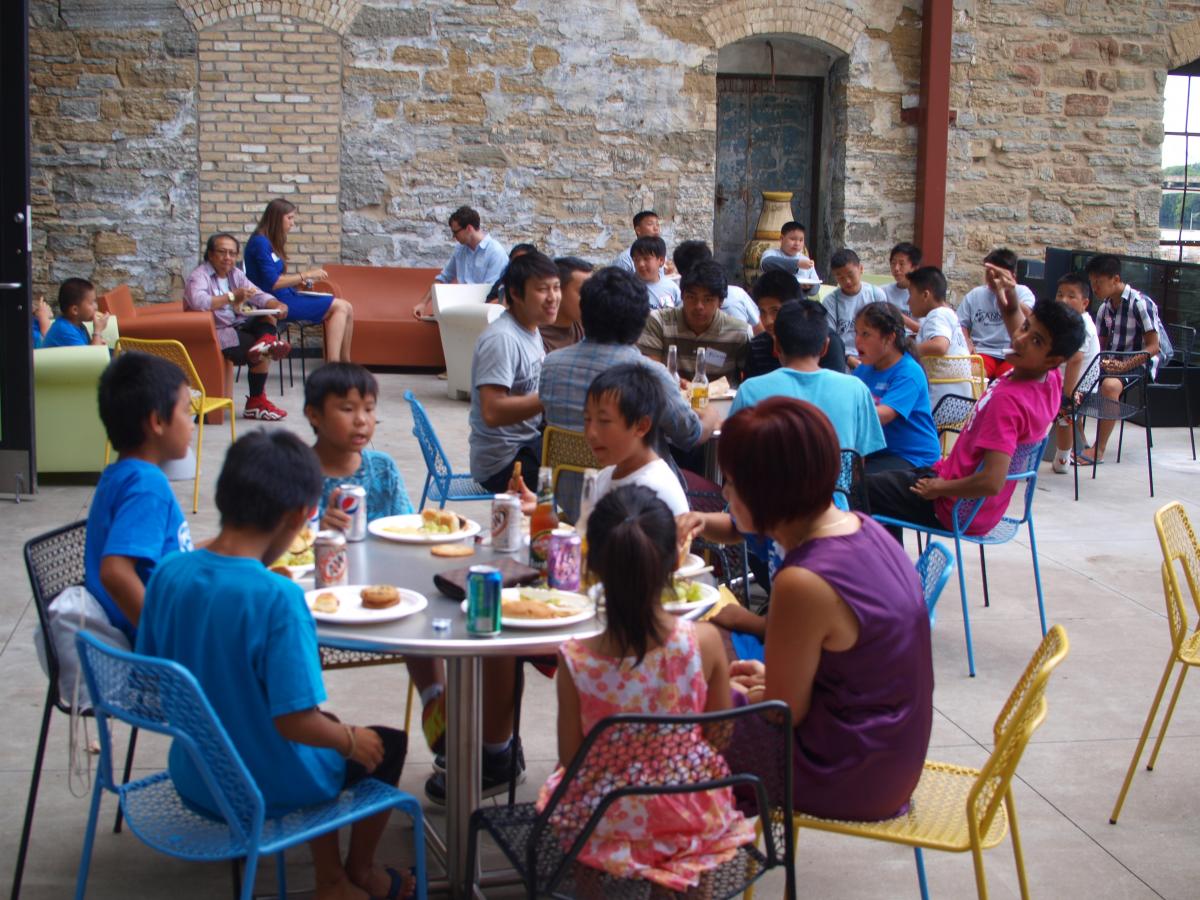 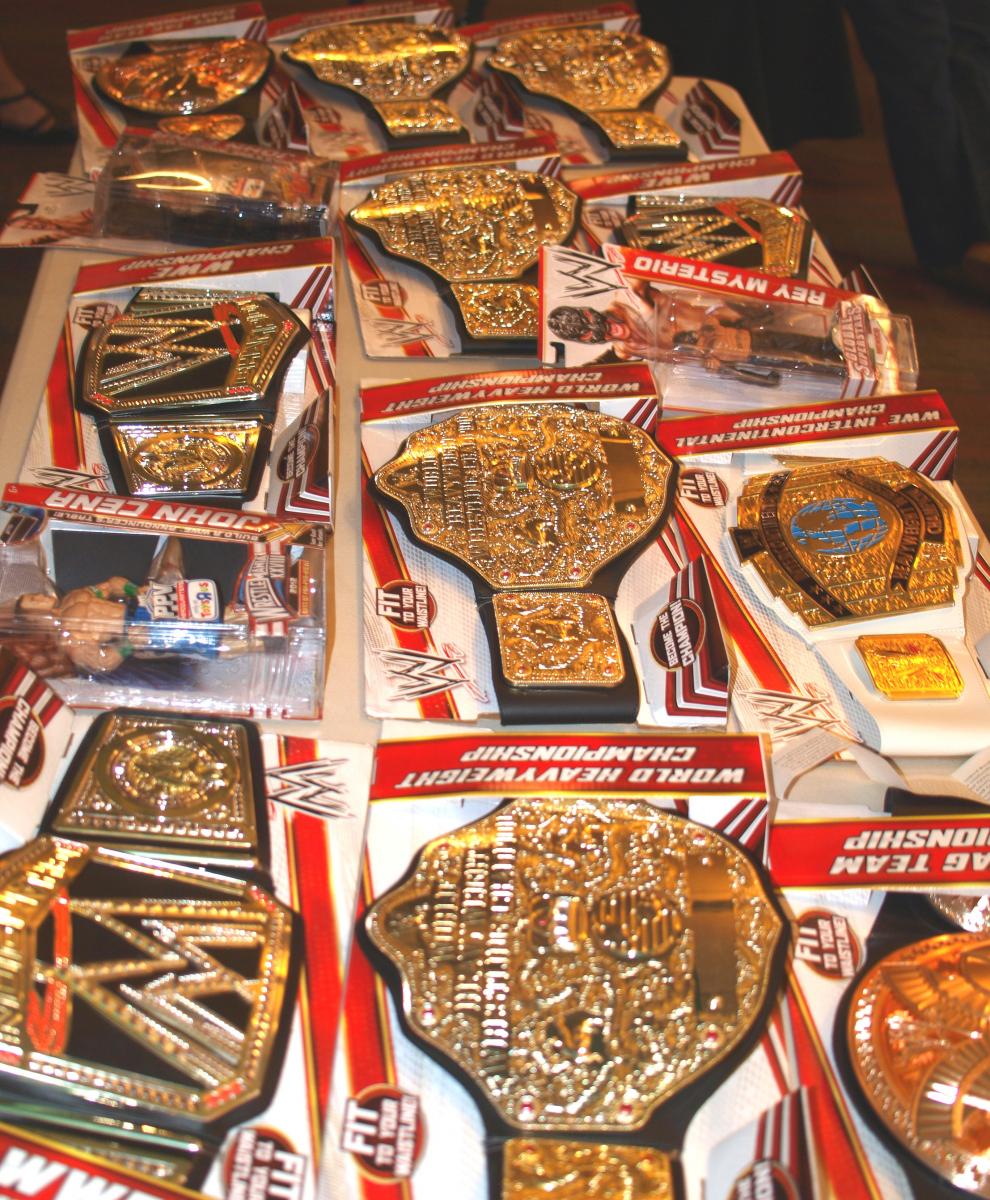 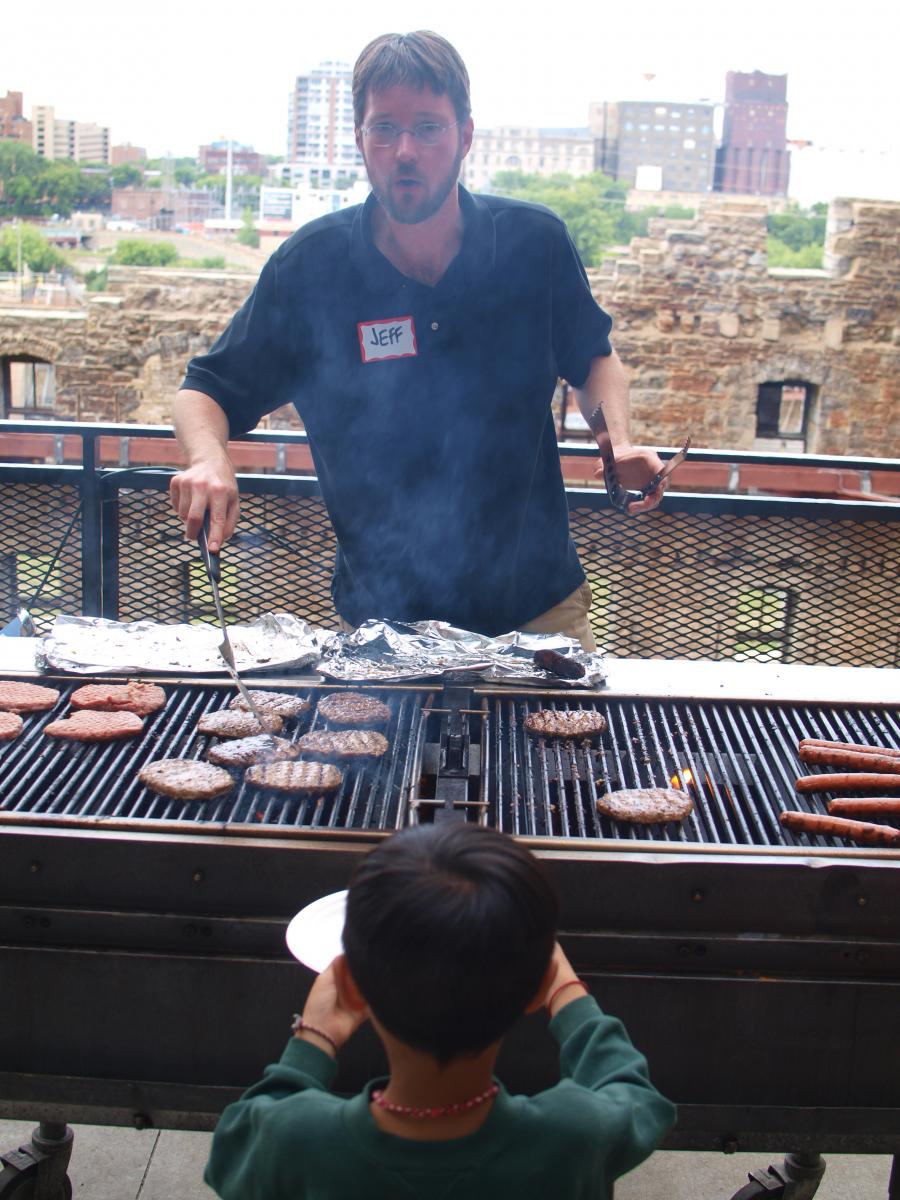 Below are short descriptions of the community projects featured at the 2013 Neighborhood Smackdown.

North Minneapolis Hmong Organizing  Planners proposed to run Bottineau LRT up Oliver Ave., a residential street, taking out the street, parking, and half people’s yards.  When Hmong families living on and near Oliver Ave. found out, they did research,  walked the proposed routes, set up a full-size train mockup in Oliver Avenue, and toured the construction zones for the Central LRT.  They then voted that they wanted the Bottineau LRT route to go down Wirth Parkway.  They presented their recommendations to elected officials at a public hearing. 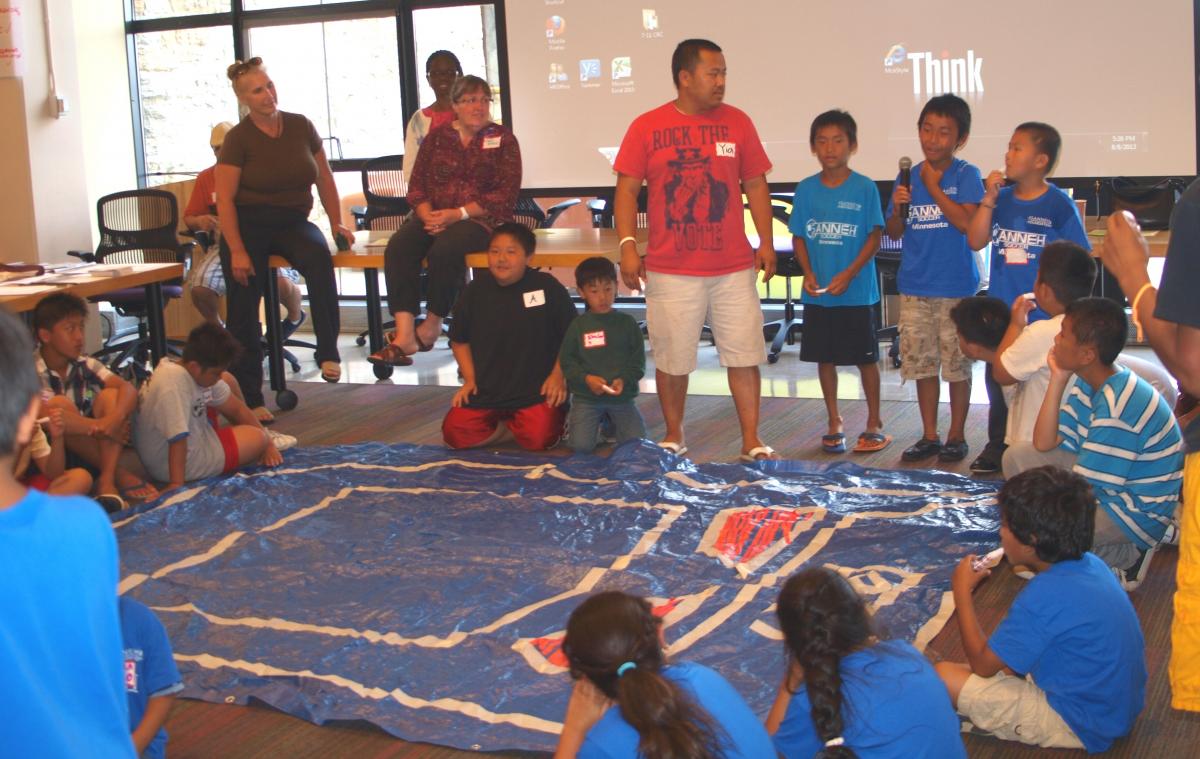 807 Task Force  When the Minneapolis Public Schools moved into their brand-new digs in north Minneapolis, northeast neighbors organized to make sure their voices were heard in determining the fate of the old MPS headquarters at 807 Broadway. Meetings with hundreds of people have been organized where developers have presented their proposals, neighbors have set priorities for redevelopment, and developers have been quizzed over their plans.

Nokomis East Neighborhood Association  The Minneapolis Monarch Festival celebrates the migration of the monarch butterfly from Minnesota to the mountains of Central Mexico, and promotes habitat conservation to restore the alarmingly low migrating population.  Live music, dance, art activities, games and more, are all designed to highlight the Minnesota-Mexico connection and foster an appreciation for the amazing monarch migration – perhaps the most beautiful and inspiring migration in the world. The Festival is expected to draw up to 10,000 guests in 2013.  Its popularity lies in the broad cross-cultural interest in the Monarch Butterfly and the event’s welcoming, bilingual atmosphere Thanks to strong support from the Spanish media, 40-50% of the visitors will be native Spanish speakers. The Festival is produced by the Minneapolis Park and Recreation Board and Nokomis East Neighborhood Association, in collaboration with the University of Minnesota’s Monarch Lab. 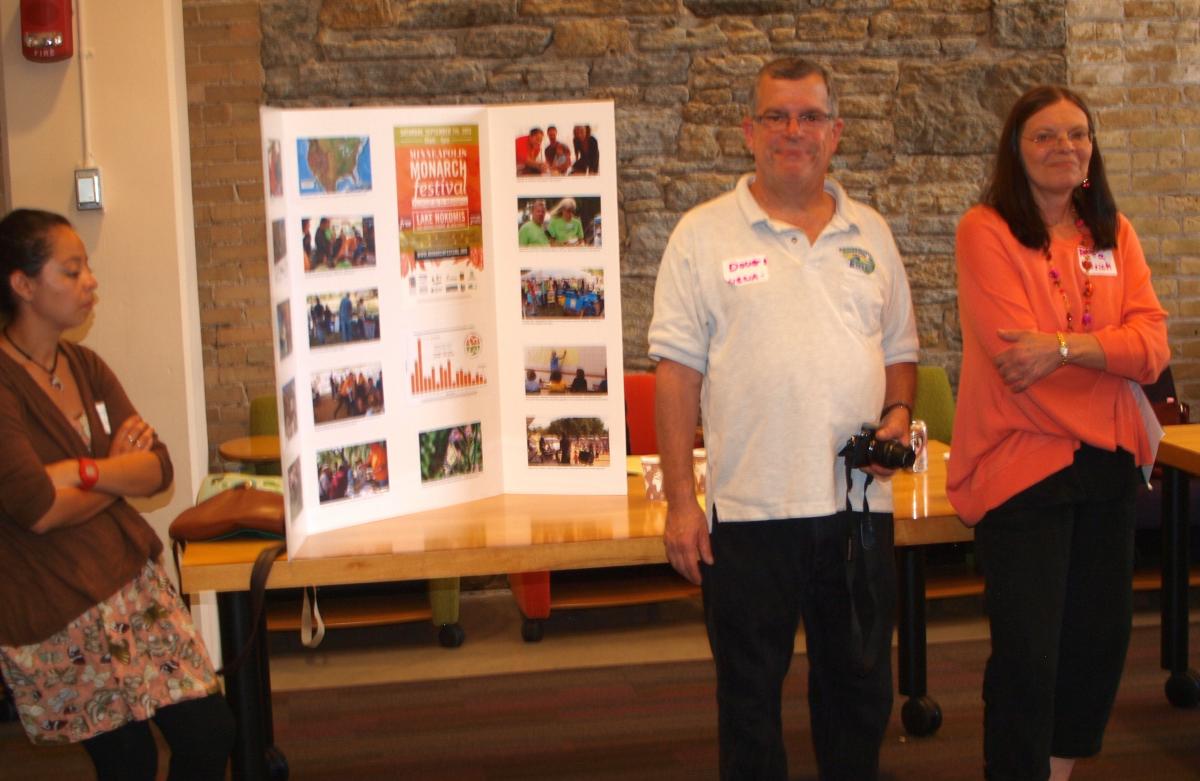 Saving the Victoria Theater (Frogtown Neighborhood Association)  A Historic Building that had been sitting empty for years was scheduled to be demolished and turned into a parking lot. A huge cross section of resident business owners, and history buffs rallied to save the building. The building was saved and got local historic designation, which makes it harder to demolish. Now a dynamic group of community organizations, arts organizations and neighborhood based theater groups have come together to purchase this building and create a cooperatively owned performance space. For a long time we have heard about the opportunities that light rail could bring but far too often the opportunities seem to be for outside organizations coming in to the neighborhood. This time we are in control.

City View Soccer Team  This past Monday, City View Apartment residents cheered as Councilmember Don Samuels dropped the first ball in the inaugural soccer game on a new soccer field where La Montaña once stood.  La Montaña was a 30 foot high pile of construction debris, where men partied, leaving behind broken booze bottles,  and used hypodermic needles.  Residents worked hard, and in the fall a steam shovel, and a bulldozer razed La Montaña, replacing it with a field of grass and the new soccer field. 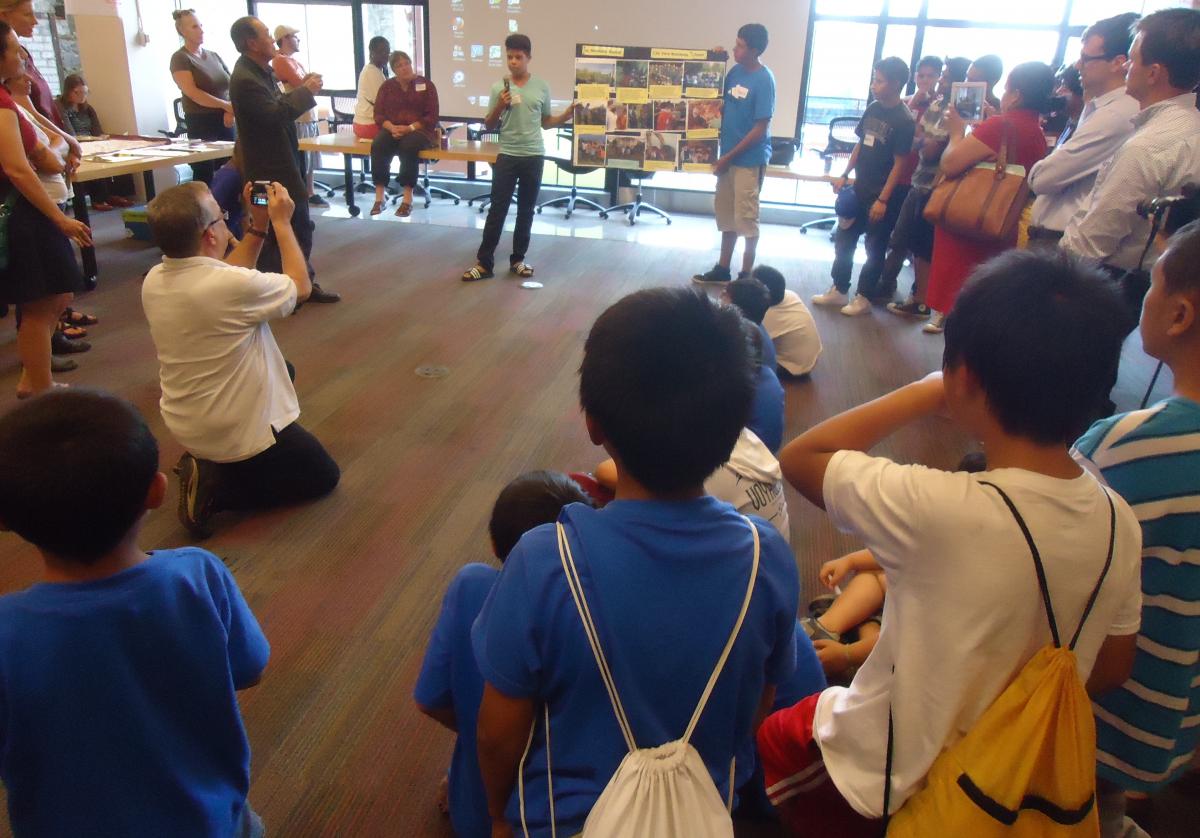 Cleveland Neighborhood Association and Works Progress  Official public meetings about transportation plans often take place at times and places that are inconvenient or even inaccessible to community residents, yet every day a cross-section of our community gathers at bus stops to wait for transportation to arrive. What if these informal gatherings of transit users could be turned into forums about the future of public transportation in our communities? Street Forum is an interactive cross-media platform that aims to tap into community voices and vision to further the conversation about the future of transportation in North Minneapolis.  A broad base of residents from the Twin Cities are being reached through this ongoing project. Specifically we targeted transit users in the proximity of the Cleveland Neighborhood along Penn Ave and Lowry Avenue. Those residents came from all over the Minneapolis area, and spanned many different ages and races, as well as a bit of range of income levels.  We’ve created a tool and platform for community engagement that focuses on reaching residents where they are and with information that is thoughtfully concise and engaging to inform and solicit feedback on a project or issue area

TOTS ROCK! (Windom Community Council)  is a dance party for children, ages 6 months to 7 years of age.  In addition to dancing to a live DJ, bubbles blow near the dance floor, temporary tattoos and blow up guitars, there is a “chill” corner with books, a crafty Creation Station provided by ARTrageous Adventures , coloring sheets & face painting by Simply Jane and cushions for lounging. The variety of activities is intended to keep children engaged and entertained while giving parents the opportunity to enjoy their children in a new environment as well as meet other parents in the community.  The main intention of this event is to build a sense of community for families in our neighborhoods with young children and to introduce more community members to local resources and businesses. 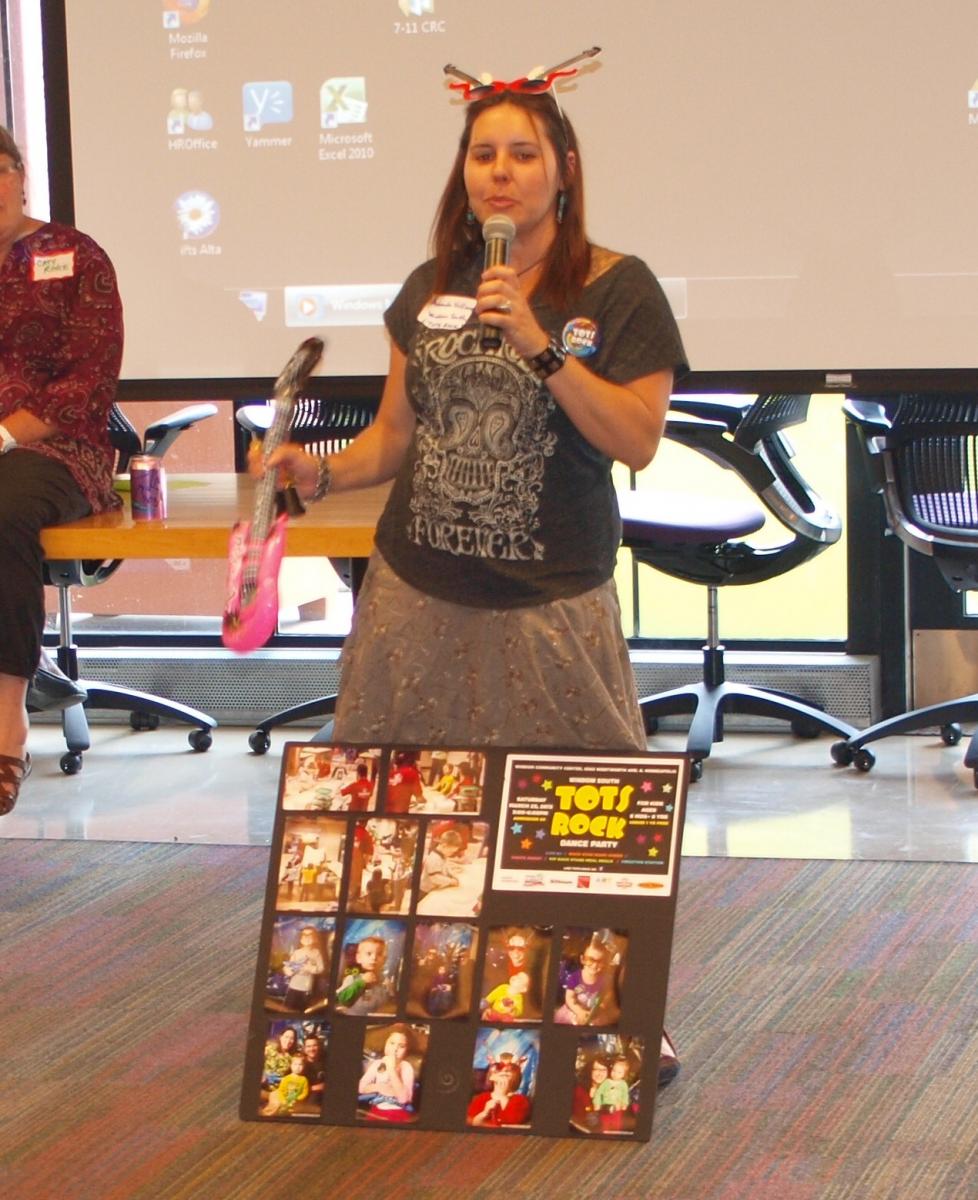 Corcoran Neighborhood Association Our new “Viviendo Saludable” Tenant Organizing Project aims to improve multifamily housing and to equip, engage and involve residents who rent their housing in the life and leadership of the neighborhood, starting with 6 distressed buildings comprising 80 units. We aim to use lessons learned to continue assessing and improving multifamily housing in and beyond our neighborhood through our Southside United Neighborhoods collaboration.  Renters, with focus on 6 apartments recently sold to new ownership by landlord Spiros Zorbalas. The renters in these buildings are disproportionately Latino immigrants in a neighborhood that already has a large population of Latino immigrants.  The project is ongoing, but our work so far has built relationships with tenants and helped spur some improvements to the apartments and garner coverage in the StarTribune. We’ve also built a small coalition of allies that includes the Minneapolis Civil Rights Department. We are now shifting focus to building leadership and skills amongst tenants while directly engaging the new management company. 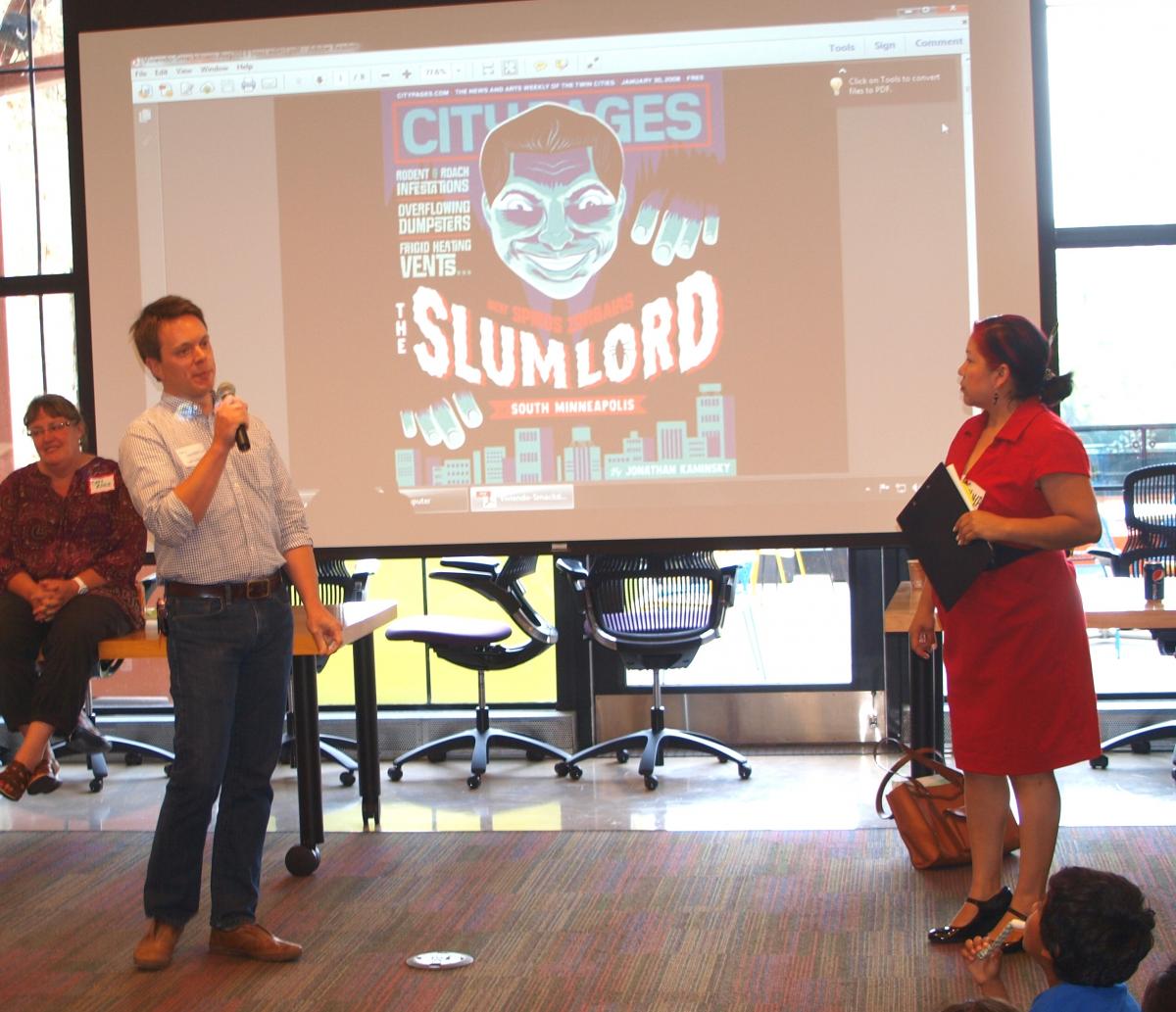 Harrison Neighborhood Association  Harrison has organized hundreds of residents on issues involving the proposed southwest LRT route.  We are part of the Transit Equity Partnership consisting of three organizations controlled by underrepresented communities committed to creating a transit system that equitably benefits the diverse racial, cultural, and economic groups that have been harmed by a century of discriminatory planning decisions that have marginalized and isolated our communities in North Minneapolis.

Lao Assistance Center  Asian participation for proposed Bottineau LRT route was almost non-existent.  North Minneapolis Laotians voted that instead of sitting through a bunch of meetings, they wanted to ride the Hiawatha LRT to Mall of America.  They got off at stops along the way wrote down what they liked and what would improve with Bottineau LRT.  They presented ideas to elected officials. 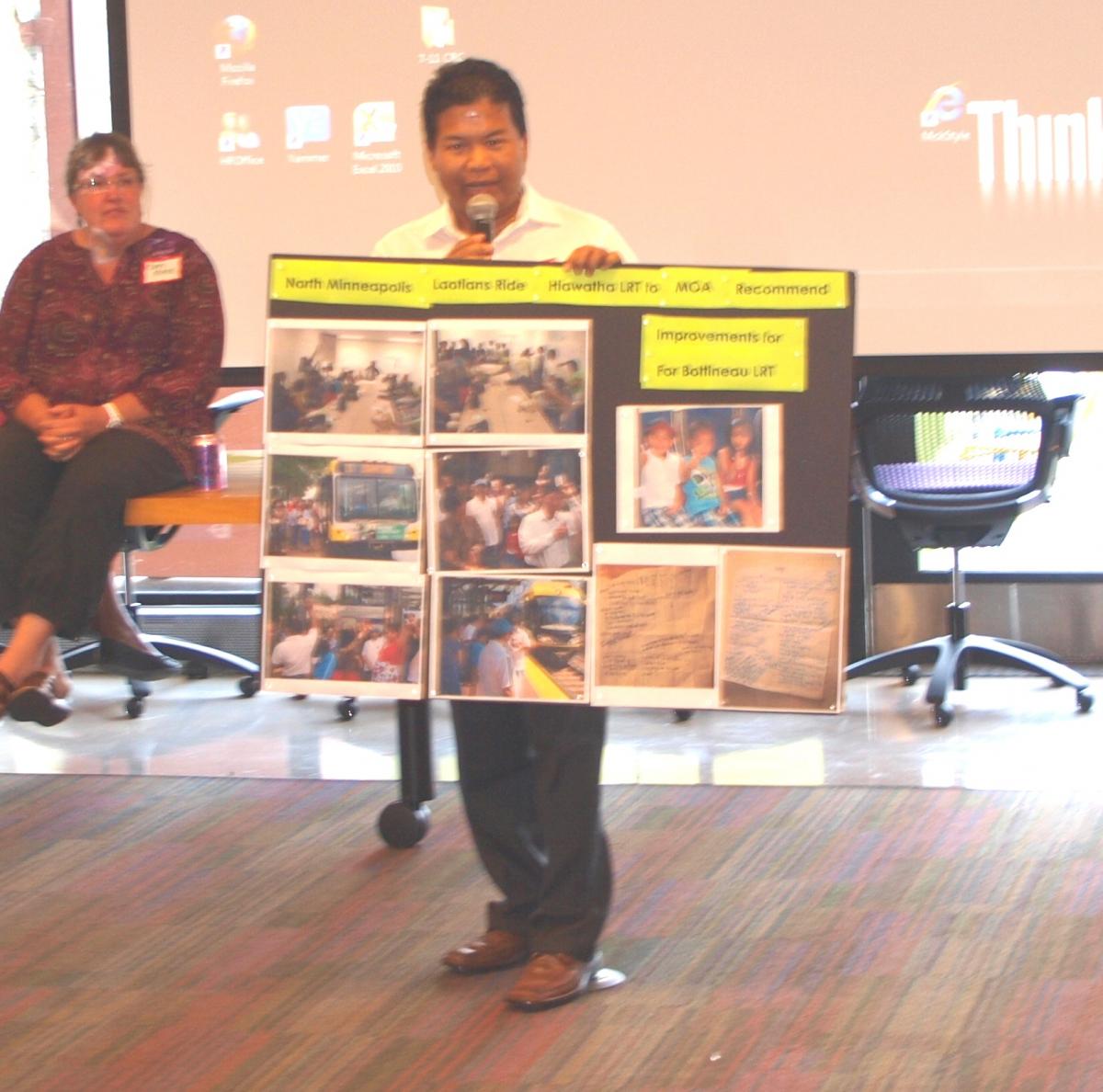 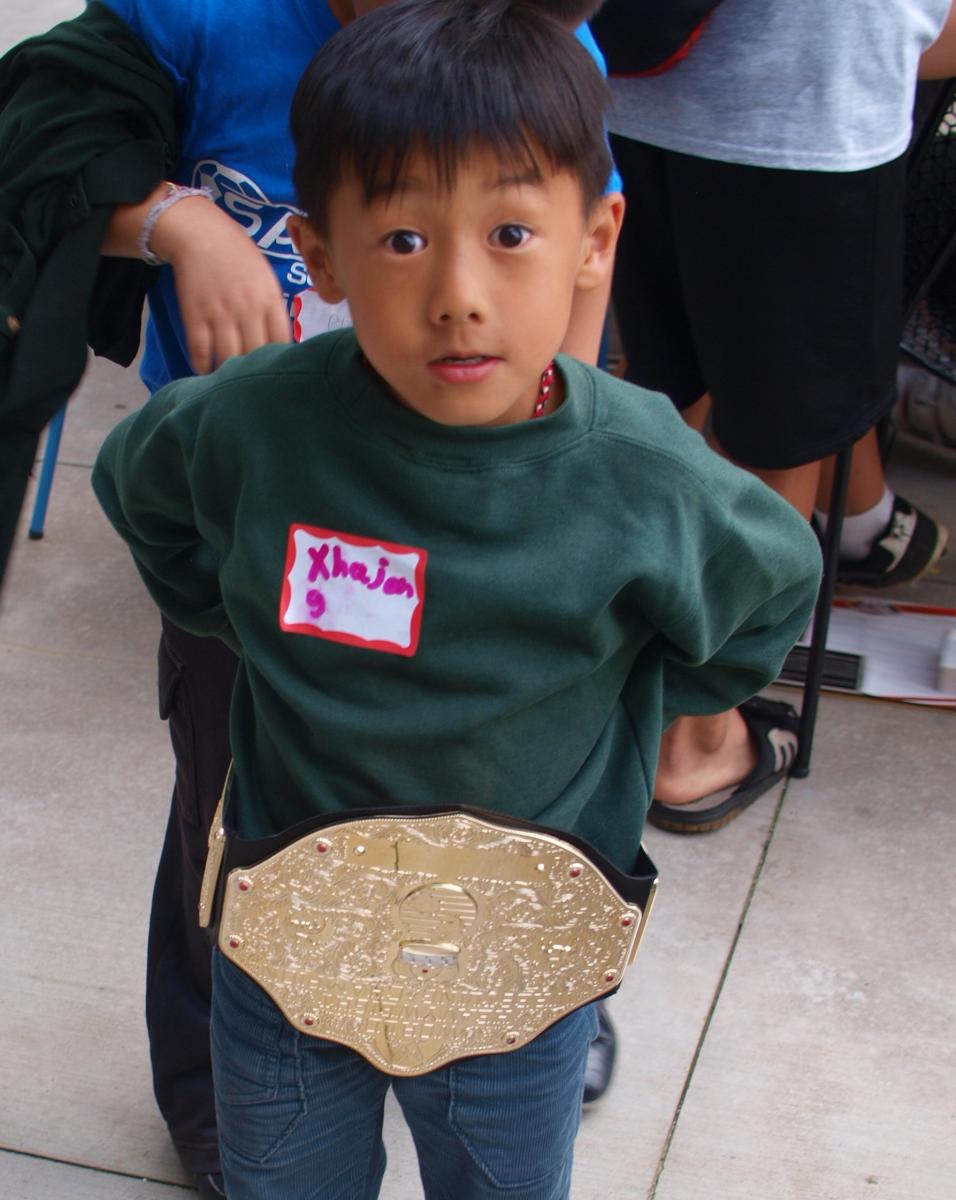