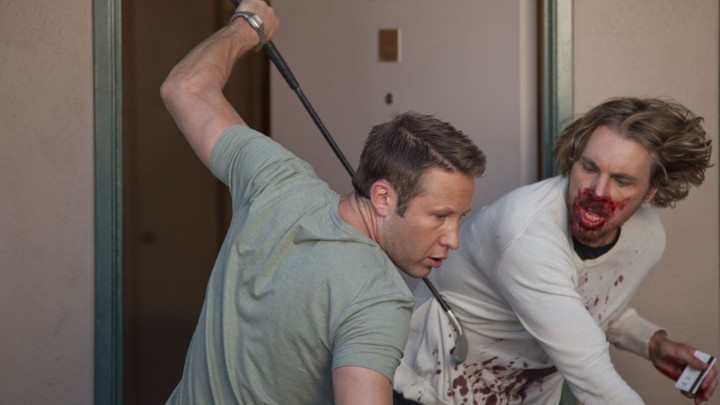 The summer movie season is an exciting time of the year for movie enthusiasts. From early May to late August, movie studios try to earn big bucks by wooing the hearts of anyone walking within a two-mile radius of a theater. The studio executives tantalize potential customers with promises of eye-candy explosions, tremor inducing sounds, and flashy, fast-moving CGI: all trademarks of a stereotypical blockbuster film.

This recruitment technique doesn’t always work, however. There are customers (and I’ll throw myself in with this lot) who usually don’t want a movie’s story to be lost to its style. I’ll take characters I can care about over a popular pop song soundtrack and indiscernible shaky camera action scenes.

This summer at the movies promises to at least make an attempt to bridge the gap between big budget bevies and succulent script saviors by offering a platter of films that range from festival circuit attendees (Safety Not Guaranteed) to across the world anticipated (The Dark Knight Rises).

Having pondered the titles that will hit theaters this mowing season, I decided on five (and one honorable mention) flicks that I am looking forward to seeing the most. A couple of these are obvious picks, and a couple of these are a little out there. Not all of these may pan out to be good movies, but I like taking a gamble. Beneath the buttery popcorn kernels and the leftover ticket stubs, that’s what going to the movies is all about: taking a chance. You never know how good something is until you see it. Listed in no particular order, these are the five movies I am the most excited to see this summer.

Why I want to see it: Yes, the title knowingly refers to a woman’s breast size: such a title symbolizes the type of humor to be found in The Weinstein Company’s sequel to director Alexandre Aja’s 2010 comedy gore-fest, Piranha 3D. The tongue-in-cheek trailer makes the film look like it could be a shaky-but-good horror-comedy. David Hasselhoff will be playing himself, in addition to a cast that includes Ving Rhames, Gary Busey, Christopher Lloyd, and David Koechner. In the director’s chair this time around is John Gulager, who had major creative input for Feast (2006), one of the most unpredictable and fun horror films I have ever seen. Another reason I’m excited to see this film is because of its writers. Marcus Dunstan and Patrick Melton team up on the screenplay. These dudes wrote the very engaging and stylish screenplay for The Collector (2009), a horror film filled with so much energy, I felt like running a marathon after watching it.

Why I want to see it: Ridley Scott is returning to the universe of his sci-fi game-changer, Alien (1979). This is a sort-of-prequel to Alien, one of my favorite films of all time. The cast is solid up and down the board, with dudes like Guy Pearce and Idris Elba and women like Noomi Rapace and Charlize Theron. A new dark sci-fi movie (and Avatar isn’t dark enough to be considered for this category) doesn’t get released all too often these days, so if Scott can instill the claustrophobic fear of Alien in a new story, I’m all for it. And with Ben Foster (the most underrated actor working right now) in the supporting cast, anything can happen.

Why I want to see it: This movie is based on a book by the same name that I read this past May, and it was one of the most entertaining reads I’ve ever experienced. Author Don Winslow takes the kidnapping genre by the hand, straps it into a Tilt-o-Whirl, and cranks the speed up to holy $%#@ level. The book, and the impending movie, is about two Southern California pot dealers whose shared girlfriend is kidnapped by a Mexican drug cartel after they refuse the cartel’s marijuana merger offer. If director Oliver Stone (who also directed Platoon, tied for my favorite film ever) even manages to successfully translate a fraction of Winslow’s depiction of the skewed and sedated Southern California philosophy and setting, then this will be a good movie. The drug dealers are complex characters, and they’re played by Taylor Kitsch and Aaron Johnson. I’m more interested in the latter, because I’m in love with the movie Kick-Ass (2010). The supporting cast makes me think Stone’s throwing a Quentin Tarantino/Robert Rodriquez reunion party: Salma Hayek, Benicio Del Toro, Uma Thurman, and John Travolta. Winslow’s book took risks, and if Stone does too, then this could be an elevated crime-action-drama-comedy.

Why I want to see it: Director Christopher Nolan’s conclusion to his Batman trilogy is a guaranteed pick on many peoples’ “movies to see” lists this summer. How can you turn your back on a story that’s linked to the hypnotizing spellbinder scripts in Batman Begins and The Dark Knight? There are as many stars in this Batman movie as the ones you see in the sky at night in the open country. Christian Bale, Gary Oldman, Michael Caine, and Morgan Freeman reprise their roles from previous Gotham installments, with Anne Hathaway, Joseph Gordon-Levitt, Marion Cotillard, and Tom Hardy stepping foot in Gotham for the first time. Having a combination of Bane and Catwoman as the lead villains is an interesting; I wonder how they will react to each other, a thick muscleman and a flexible feline. Another peculiar thing about this movie is the setting: it takes place eight years after The Dark Knight. Nolan should find a way to satisfyingly conclude his take on Gotham’s savior.

Why I want to see it: This is an original story written by, starring, and co-directed by Dax Shepard, a man whose work I loved in Without a Paddle (2004) and Idiocracy (2006). The plot revolves around Charlie Bronson (played by Shepard, the character name no doubt a tribute to the former Death Wish star), a former getaway driver for a group of bank robbers led by Bradley Cooper. Bronson betrayed his friends years ago and went into the witness protection program. This betrayal resulted in an eight-month prison sentence for Cooper. Leading a new life with his girlfriend, played by Kristen Bell, Bronson is confronted by his past when Cooper and the rest of his old buddies come knocking with the malevolent intentions of reclaiming some bank robbery money Bronson stashed away somewhere.

I love these types of stories, when a character that has turned a new leaf is faced with hostile forces from their old life. I’ve wanted to see Cooper as an antagonist since he donned tube socks in 2001’s Wet Hot American Summer. While watching the trailer, I noticed Tom Arnold is co-starring as a U.S. Marshal assigned to protect Bronson. Arnold looked like he was having a hell of a good time in this movie, spewing his zany, sometimes offensive humor in top-notch form. Although this is a comedy, it looks like it will be of the Burt Reynolds variety, which is awesome. The trailer features car chases galore. Shepard’s latest could blend legitimately thrilling car chase action and gut-busting comedy quite well, which would help me forget the blandness of Fast Five.

Why I want to see it: Set in a trailer park region of Texas, the story is compelling. Chris Smith (Emile Hirsch) owes a group of men six thousand dollars, and if he doesn’t pay up, the group’s leader, Digger Soames (Marc Macaulay), says he will “wrap [Chris] up in electrician tape and bury [Chris] in a coffin about ten feet deep.” Chris is poor, and so is his dad, Ansel (Thomas Haden Church), so when Chris remembers that his mother Sharla (Gina Gershon) has a fifty thousand dollar life insurance policy, killing her for the money seems like a great way to stay alive. As you might guess, Sharla is not well liked by the Smith family. To play it on the safe side, Chris hires “Killer” Joe Cooper (Matthew McConaughey), a Southern gentleman and detective who does hit jobs on the side, to exterminate Sharla. But then money woes intrude again, because Chris and Ansel can’t afford Cooper’s advance fee. Cooper’s willing to be flexible, after he lays eyes on Chris’s sister Dottie (Juno Temple), that is. Cooper agrees to move forward with the hit as long as he can keep Dottie as a sexual retainer until Chris and his dad can dish out the dough.

I’ve never seen McConaughey in a cold-blooded role before (I still haven’t seen Frailty, forgive me, Ashley Tangen); Killer Joe is a big departure from his light-hearted romantic comedies. The director is 77-year-old William Friedkin, who has been the chief behind the camera for memorable films like The French Connection, The Exorcist, and 12 Angry Men. I have a lot of confidence in Hirsch (Alpha Dog, Into the Wild) to properly portray a desperate drug dealer; he’s an earnest actor who brings energy to any project he’s involved in. The trailer for Killer Joe has a blue-collar Texas feel to it, with rusty pickup trucks and dusty back lots dominating the scenery, and if Friedkin and company proficiently execute the juicy script material, this NC-17 rated flick could transport you to the seedy world of a dirty murder story. Bring a napkin, though, because it’s going to get greasy.

Thanks for reading! Have a great summer at the movies.