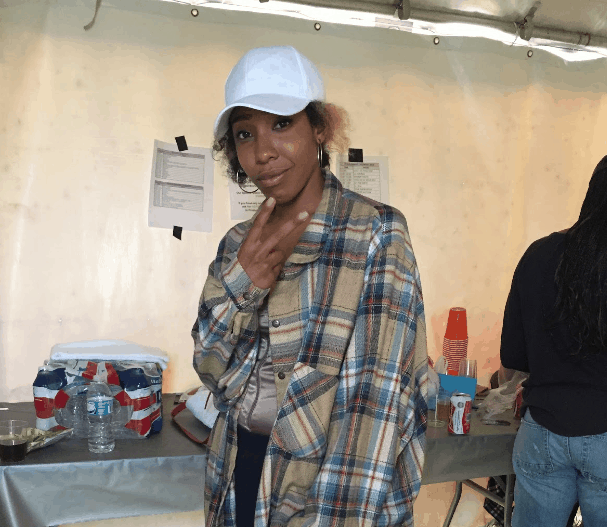 The Twin Cities Daily Planet’s Clara Wang spent some time in the backstage tent hobnobbing with many of the Soundset artists to get exclusive interviews. Enjoy…

“I think it’s influenced it a lot. I mean, most of the Hip-hop I grew up listening to was from Minneapolis artists, and most of my music is just a painting of the experiences I go through, and it’s kind of like the back-drop of everything I write.”

Like in “Cedar Ave” (track from “Southside Looking In”)

“Yeah, it’s about everything we used to do, versus now.”

“Some of it’s nostalgic, definitely. Some of it’s a reflection though, ‘cause the sh**t we did wasn’t all that cool.”

Are you planning on going mainstream in the future, or staying indie?

“I think the independent route is the future. I would consider signing to a major, if it makes sense, but oftentimes you lose a lot of control about when your music drops and how it’s dropped, or the content. I’m not going to give up any creative control. I like being in control of my own marketing and promotion and booking and all that. So I’m independent. You get the bigger profit share, you get to connect with your fans, and you get to decide what you want to do.”

“I’ve got new music in the works. It doesn’t really have a shape yet; it could be an album, or an EP, or something like that.”

How do you feel about your new music? Is it the same direction you’ve been going, with the soulful samples, and the neighborhood feel, or is it different?

“I’ve been breaking out the box a little bit. I’ve been working with new producers, I’m just trying to expand my comfort zone, if you would.”

As a developing artist yourself, what would you tell another young MC who’s just starting out?

“Social capital is the name of the game. It’s all about who you know- I would suggest meeting everybody you can, giving them your music, going to shows, supporting people…And pump your music. Don’t just drop a project and let it fly by night. Put work into getting it into the right hands so people actually listen to it, otherwise you’re just a waste of effort.”

What’s your favorite and least favorite part about being on tour?

“I haven’t actually been on a tour yet, but I go on tour in two weeks. I’m guessing my favorite part will be kicking it on the beach and drinking fruity drinks, and performing of course, and meeting fans. And the least favorite will be the dead time.”

Any upcoming projects you’re excited about?

“I have two EPs coming out. One with The Mechanics that we co-produced together and I have another one that I produced all by myself. I also have an album on the way, so we got a lot of new music coming very soon.”

Who are some of your inspirations?

“I’m heavily influenced by 90’s culture, I love 90’s culture and I like cartoons a lot. I’m really big on like truths, religion, I’m inspired by anything, really. Erykah Badu, Andre 3000, Q-Tip, Pharrell, those are the people who really helped shape me being an artist, for sure.”

What’s one thing you would tell an aspiring female MC?

“I would tell them to be as genuine to yourself as possible. Of course, everybody who goes into the industry, there’s a big chance that they’re going to make you be something you’re not, and you’ve just got to make sure you’re staying true to the art. There’s nothing wrong with compromising, there’s nothing wrong to bending a little to get what you want, but it’s got to be on your terms. You have to be yourself through it all, don’t let anybody tell you who you are or what you are.”

How was your Soundset experience?

“Today felt like it was new all over again, like it was my first time again, because the energy of these festivals is so high and I’m really trying to break this barrier and get more people involved and feeling it, you know what I mean.”

Your profile on Rhymesayers said you have two sides in one body, tell us what that’s about

“Well dig, that’s a great question. Everybody has a lot of faces and wears a lot of masks. I think that me being a gemini and being who I am and knowing myself, I definitely have two sides, you know what I mean, and hence the name deM Atlas. deM is that human side, deM is that vain, sometime arrogant, depressing sort of figure, you know, a human story, like any story is. atlaS is more about trying to find a higher plane and coming together and being as one. deM is them saying ‘They don’t give a f**ck about my life,’ whereas atlaS is saying, ‘We’re all we got.’”

Do you think you’re planning on going mainstream, or staying indie?

How are you feeling about your new album, “Downer”?

“Yeah, evolution. Or just planting another seed, next to “Charlie Brown,” a whole different experience.”

So here’s a question for the ladies out there: When and why did you start growing dreads?

“It was more so about accepting myself, and accepting my kinky hair, my natural hair. Because for years of being in a suburban high school I wanted to be something else than who I am. I used to put chemicals in my hair and shi**t like that, so one year it was just like, forget this, I’m just going to grow my hair out and see what happens. This is the result, it became a crown, and that’ a powerful thing, you know.”
Dessa

Doomtree has so much energy as a group, why do you think you guys have so much chemistry together?

You guys have put out several albums already, what’s your favorite one?

“You know usually the most recent one is the favorite one, but I have to say that I’m more a fan of songs than I am of records. I know that’s not a very musician thing to say, but I like singles, you know. Some of the singles that I’ve liked from Doomtree are really old, and some of them are recent. One of the older jams is “Knives on Fire,” I love that track, and probably one of the newer ones… I’m really proud of the video we did for “Final Boss.” For people who are kind of tooling around online looking for an intro to our stuff, that video showcases it really nicely.”

What’s your favorite and least favorite thing about being on tour?

“It’s hard to say because I grew up here, and I’m part of it, so I haven’t known that much else to compare it to, but I think that we do have a permeability between genres. Here it’s possible to collaborate a folk artist with a guitarist who maybe works in metal, with somebody who maybe works in the punk scene. This musical community allows for these kinds of collaborations without looking too hard, so that’s a big strength.”

What do you think is a difference between your solo albums and a Doomtree album like “All Hands”?

“I think that Doomtree is interested in beauty, and aggression. I’m interested in beauty and aggression, but it’s in different ratios. I think a Doomtree album is generally a little bit more aggressive, there’s more rapped choruses, there’s more propulsive (imitates bass sounds) bass lines, and in my records there’s usually more singing, and more harmonies. I think it’s usually just an inversion of the ratio between beauty and aggression, I think is the difference between a Doomtree record and a Dessa record.”

Any advice for aspiring female MCs?

Every artist has their own process of getting in the studio. Do you have any routines, or foods, that get you in the mood?

“I usually record most of my vocals in my own closet, so I usually engineer them myself. The rest of the record is recorded somewhere else in a super pro studio. I get really self-conscious pretty easily, so I like the opportunity to record, and re-record, and re-record without feeling like I’m taxing a producer’s patience. I record it in my closet, and I usually record in clothes that you would play a pickup game of basketball in, you know, like a sports bra and shorts, you now.”