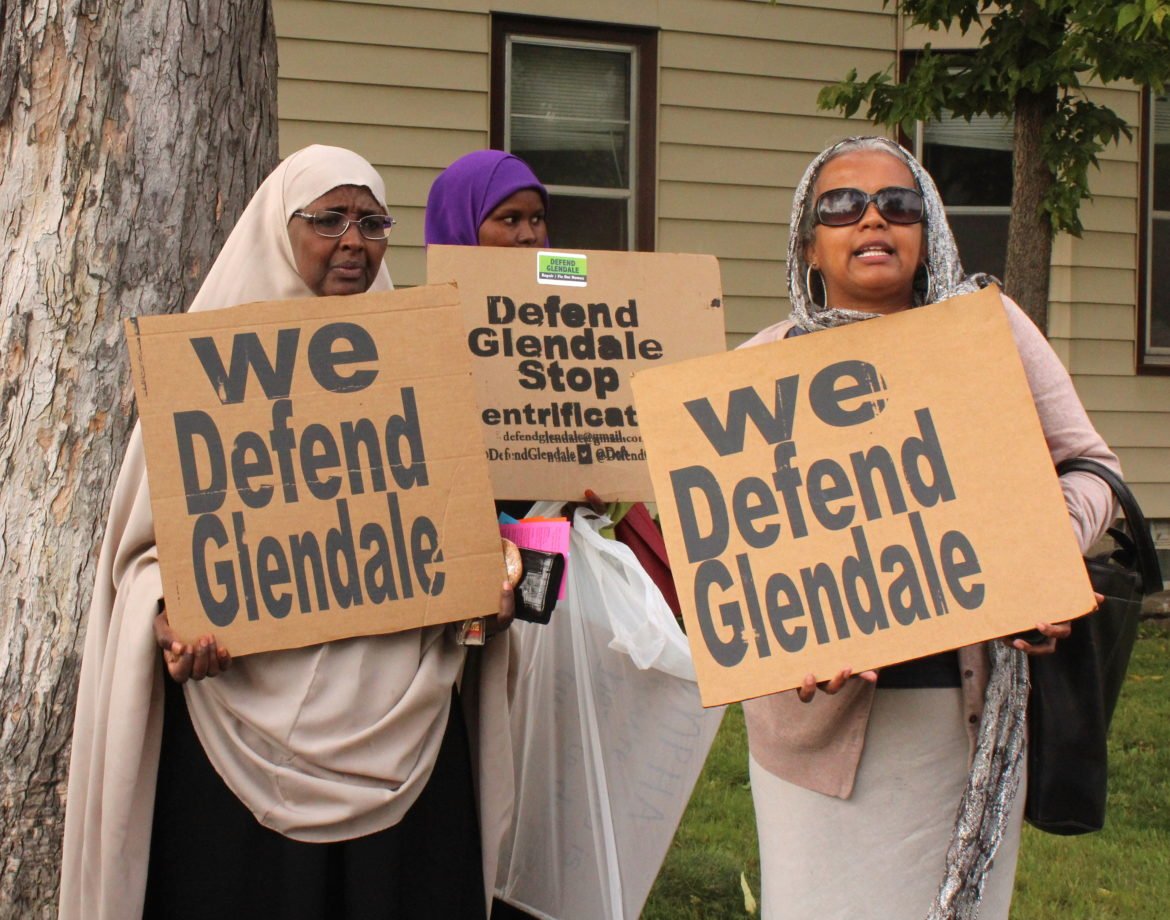 Ladan Yusuf (right) marches with fellow Glendale Townhomes residents through their Prospect Park neighborhood during a housing demonstration on Sept. 22, 2016.

On Thursday, Aug. 17, at the Minneapolis Public Housing Authority meeting, Ladan Yusuf and fellow Somali public housing tenants walked to the front of the room, clenching signs in their fists: “We Defend Glendale,” “You can’t intimidate us” and “Ma Guurayno!” – we are not moving.

For the 100 or so public housing tenants there, the MPHA meeting at Cora McCorvey Health and Wellness Center was just to learn about next year’s budget and possible changes.

For many, including Yusuf – a Somali woman from the East Coast and Glendale Townhome resident – the meeting held the opportunity to make their voice heard.

Yusuf is an organizer with Defend Glendale, a group which advocated for home repairs as the better alternative to MPHA’s proposed plan to demolish and redevelop their townhomes in 2015.

Today, other public housing tenants have joined organizing efforts with Defend Glendale. They argue that MPHA intends to push the Somali community and low-income families out of their housing through partnerships with private developers.

“It’s all about displacing people,” Yusuf said of MPHA’s plans to finance the future of Minneapolis public housing. “We need to stay in our community. We’re going to fight.”

Confusion over MPHA’s plans for the future

Over the past several months, Minneapolis public housing tenants say they have not received timely or clear communication from MPHA about development plans. Tenants’ fears of displacement have increased, Yusuf said. As a result, tenants across multiple MPHA developments are taking a proactive position and organizing to push back against any potential privatization.

Russ said MPHA is exploring options for alternative funds which include: borrowing money, issuing bonds through the city government, grants or the Low-Income Housing Tax Credit (LIHTC). Before taking the MPHA job in Minneapolis, Russ was the executive director of Cambridge Public Housing Authority in Massachusetts, where public housing experienced a budget crisis and sought private financing.

Russ said MPHA will likely pursue financing through a combination of those means.

The MPHA published a set of guiding principles for redevelopment as well as a Moving to Work budget and plan for 2018. Moving to Work is a HUD program that allows public housing authorities to design and test new strategies to create low-income housing.

Yusuf said tenants had little access to or communication about the plans from MPHA. They were not informed when those plans were published, she said, which has limited tenants’ amount of time to review.

Many of the documents are only offered online in English, limiting accessibility for the large percentage of tenants who do not speak English, speak it as a second language or do not have internet access, Yusuf said.

In addition to language and cultural barriers to accessing this information, Yusuf said the documents are long – some more than 100 pages – and difficult to understand because of the jargon used.

As one of the tenants who can decipher the documents, Yusuf said she believes MPHA is laying the groundwork to move toward privatization.

The process of moving public housing toward private financing begins by years of ignoring disrepair in public homes, Yusuf said. For example, the MPHA has continually put off much-needed repairs in Glendale Townhomes. Yusuf said this was an “intentional” step toward inviting private developers to “save” the housing, a tactic often called “demolition by neglect.”

Then public housing authorities privatize through programs like the Low-Income Housing Tax Credit and Section 8 vouchers.

For public housing tenants, rent is set at 30 percent of the tenant’s monthly fixed income. If a tenant has no income at all, rent is $75.

But under private market LIHTC developments, the rent for designated affordable housing units is calculated based off a percentage of the area median income (AMI). In the Twin Cities, the AMI is $90,400 for 2017. LIHTC requires developers to set rents in low-income housing units at affordable rates for tenants making 50 or 60 percent of AMI, depending on the number of low-income units in the building.

According to a July 2016 report from MPHA, about 95 percent of the agency’s tenants make less than 30 percent AMI. So when LIHTC housing unit rents are priced based off of 50 or 60 AMI, that means such units would be grossly unaffordable for the majority of MPHA tenants.

In addition, under private market LIHTC developments requirements, developers only have to make 20 to 40 percent of their units “affordable” (meaning priced to accommodate tenants making 50 to 60 percent of AMI), with the rest being set at market rate. That means even fewer low-income units would be available, and those that would be available are not affordable for everyone.

Hoda Isak lives in Elliot Twins. If the MPHA created housing across the street through the LIHTC, the same Elliot Twins tenants could not afford to live there because they would be required to pay a percentage of the median income at the edge of downtown. That’s more than any public housing tenant or family can afford, Yusuf said.

Russ acknowledged that LIHTC is a controversial form of financing public housing. But he said if a building begins as public housing, where tenants pay based off their fixed income, it would stay that way even if they partnered with private investors.

“We design the financing so it would not increase the tenant’s rent,” Russ said. “This can be done in ways that protect the families… A private investor is not necessarily like a developer.”

Russ said MPHA would draft a guarantee right-to-return as part of any agreement with a private investor.

“The displacement plans are still intact,” Yusuf said. “How are you going to have first priority when you can’t afford to get back in?”

When tenants hear that “redevelopment” is being discussed, it incites a fear of displacement, Yusuf said.

Historically, public housing tenants have been forced from their homes by private developers buying public housing units. For example, Heritage Park, west of downtown Minneapolis, had four public housing developments with 770 units before developers converted the housing for mixed-income, mixed-density use with 900 units. Of those 900 units, 200 are in use as low-income public housing. The total cost of that project was $225 million, funded by federal and state organizations, the City of Minneapolis, MPHA and the Metropolitan Council.

Russ said if demolition or redevelopment of a building temporarily forced tenants from their home, MPHA would mitigate displacement by moving tenants into other vacancies in the building, offer other housing within MPHA’s portfolio or offer Housing Choice Vouchers (HCV).

HCVs are a way for public housing authorities to transfer units from public to private ownership via the Section 8 voucher. Under the Section 8 voucher, people seeking housing can lease a unit in a designated complex or the private market by paying a portion of the rent.

Although MPHA has included an idea for property owner incentives to accept more HCVs in the 2018 plan, Isak said she fears even with a Section 8 voucher in hand that the rental market in Minneapolis is so tight it would be hard to find affordable units to rent. According to the second quarter 2016 Minneapolis Trend Report, the rental market vacancy rate in 2016 was 3.7 percent.

As of July, there were 1,201 people on the waiting list for Section 8 vouchers in Minneapolis, said Jeff Horwich, MPHA communications manager. The waitlist has been closed since 2008 when 15,000 people signed up over the course of just a few days. MPHA expects the list to reopen early next year, Horwich said.

Fahmo Mhmo, a tenant at 1212 Eighth Street public housing, said she worries what affect a potential move could have on her family.

“Our children are American. They were born here,” she said. “We have a right to stay in these homes as tenants.”

As soon as Yusuf read the MPHA document drafts this spring, she began to organize with tenants in public housing across Minneapolis.

And although Russ said the MPHA is in the planning phase of their 2018 budget and don’t know what funding will be available next year, Yusuf, Isak and other Somali tenants in public housing have reported harassment and intimidation from MPHA in an attempt to block tenant organizing.

Having felt pressure from MPHA employees, Isak worries she could lose her housing due to her organizing work and discussing MPHA’s draft plans with other residents in Elliot Twins For Isak, who pays the rent minimum because she is disabled, losing her public housing could mean homelessness.

“They didn’t have any legal grounds to evict me,” she said. “But I think if they did, they would.”

Yusuf said she has also experienced intimidation tactics and harassment as a result of organizing residents across public housing buildings. An MPHA employee verbally told her she couldn’t enter certain buildings and she has been asked to leave. Yusuf said property managers have tried to keep Defend Glendale organizers and residents who speak out against MPHA from organizing meetings in public housing buildings.

Russ said MPHA has tried to clear up any misunderstandings with tenants but “there’s some folks that just don’t believe us.” During a phone interview, Horwich referred to the tenants’ belief of MPHA privatization as a “conspiracy theory.”

“Everything we do, they try to come after us,” Yusuf said. “This is like a little club of developers and their allies at City Hall that want to destroy poor people here.”

For public housing tenants, the fear of displacement does not just stem from private developers or conversions of public housing to the private sector. It’s also tied to the citywide disinvestment in long-term public housing for low-income people of color in favor of other developments that largely benefit white, middle- to upper-class Minneapolis residents.

Since Isak lives in Elliot Twins, she lives just a stone’s throw from U.S. Bank Stadium. Isak has watched her neighborhood shift as Minneapolis prepares for the Super Bowl. The city is “cleaning the area up,” she said, by making upgrades such as investing money in better lighting. While the neighborhood’s crime rate is nearly double the city’s average at about 5.5 percent, the cheap-but-rising property values make it a prime location for development.

Isak has watched the city – both public and private entities – invest in making the Elliot Park neighborhood a safer and more attractive area for the Super Bowl when they could have invested in renovations for places like Elliot Twins, and the homes of people who are already living there.

“But they won’t save our houses,” Isak said. “As poor people, we know that [these investments are] not for us.”

[Editor’s Note Aug. 25, 2017: This article has been clarified to bring further context around what documents have been translated by MPHA, housing availability at Heritage Park and private vs. public use of the Low-Income Housing Tax Credit.]