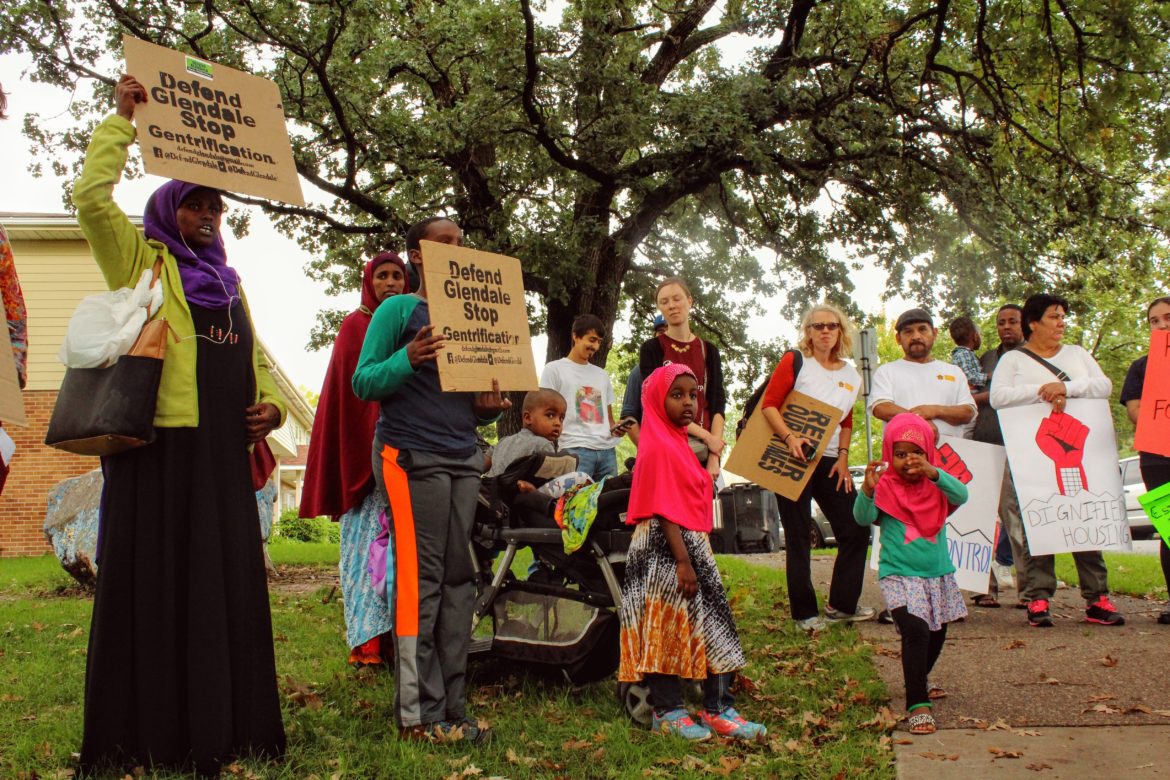 Residents and housing organizers from across the Twin Cities gathered at Glendale Townhomes on Sept. 22 as part of a day-long tour from Minneapolis to St. Paul during the Renters' Day of Action. Photo by Cristeta Boarini.

Minneapolis is in a housing crisis. As condos go up, driving up rents, thousands in the city are homeless. Minneapolis Public Housing Authority (MPHA) is selling off housing that thousands rely on. New public-private partnerships to provide housing inevitably transfer funding and tax dollars for housing from the state to the pockets of landlords and private corporations. All the while, the city is becoming further gentrified, pushing people of color and the working poor out to white suburbs where they have no access to transportation or jobs, and feel unsafe amid the post-election racism.

For two years now, residents of the Glendale Townhomes have been fighting to protect their community from destruction. They are fighting the unscrupulous interests of developers and politicians to fill their pockets, and the rhetoric that threatens public housing.

Take for example the latest report from developer consultant Sherman Associates presented to the meeting of the MPHA on June 22, 2016. For each of the four possible development options for the Glendale site, Sherman Associates outlined key benefits and drawbacks. The Defend Glendale Campaign analyzed the report and discovered a bias towards redevelopment, which transforms a public good for the many into private profit for a few.

For example, the Sherman Associates report suggests that full development of Glendale will result in “more light rail access.” The assertion assumes and concludes that current Glendale families are not utilizing their local public transit system, despite the fact that residents rely on public transit to reach health care providers, schools, and their jobs. There is already direct access to the Green Line Light Rail from Glendale. Full redevelopment would changes who gets to access to the Light Rail: Low-income people who need it to get to their jobs, or gentrifiers who have cars and use it sporadically to attend football games.

The report does not investigate resident retention strategies, or how the residents will be able to stay in their homes. This is because tenant retention is never the goal. Research shows that the transformation of public housing into public-private partnership is done to remove an essential safety net from those that need it the most. Gentrification displaces low-income families from Minneapolis and its amenities. None of the $113 million Sherman Associates is asking for to demolish Glendale comes from private investors, it is all tax dollars and government funds. Yet MPHA says they have no money to make basic rehab while they get funds from the state annually to make repairs and rehabilitate properties in need. Every year they skip Glendale and rehab others.

The report provides no timeline for its lauded full redevelopment option, nor a schedule for upkeep during the additional work needed to explore the Sherman Associate scenarios. This lack of interest in devising a timeline shows that MPHA is engaging in a process of “redevelopment by neglect” – refusing to upkeep while considering redevelopment plans with the hope that the homes will fall apart thereby enabling redevelopment. Although MPHA tabled this report, they refuse to provide funding for repairs placing Glendale under continuous threat.

For example, the Defend Glendale Campaign recently learned that the Sustainable Resources Center, Inc. (SRC) – a non-profit organization whose mission is to insulate homes, provide clean air, energy efficiency and energy savings programs to homes in Hennepin County – offered MPHA the opportunity to insulate all of 184 units of Glendale free of charge in February 2016. SRC receives funding from U.S. Department of Energy. SRC’s goal was to start the insulation process last year. DGC learned that MPHA has been purposely blocking SRC from insulating our homes for almost 12 months because MPHA wants to demolish Glendale in the coming years. MPHA does not want any repairs or insulation to take place in Glendale at all. MPHA has made this decision even though funds are available to insulate, fix and repair Glendale.

In December 2016, the city of Minneapolis voted to hire Gregory P. Russ to lead MPHA without community input or engagement. Russ is known for his national record of privatizing and selling off public housing to private corporations. This confirms MPHA still wants to privatize Glendale, other MPHA properties and gentrify Minneapolis as they oversee 20,0000 residents who are low-income, majority people of color, seniors and the disabled.

Minneapolis counts housing affordability based on a percentage of the overall median income. Considering the vast wealth gap, reproduced through race and ethnicity, affordability based on median income does not speak to low-income Minneapolis residents. There is a huge different between income based housing for low income residents that are public housing, and the term politicians use now that is “affordable housing.” “Affordable housing” is not for the poor, nor is it for the working class. It is for the middle class. Therefore, the development of further public housing – where one pays a third of their income, no matter what that income is – the only way to increase actual housing affordability in Minneapolis.

The recent Center for Urban and Regional Affairs report on gentrification shows that Minneapolis is a tale of two cities: in one city, middle class whites live in a paradise of accessibility to jobs, entertainment, and quality of life; in the other city, working class folk and people of color struggle in substandard or unaffordable housing, are pushed out of the city altogether, or are made homeless. We need a city and a city government that implements strict rent control measures, increases its public housing arsenal, and repairs and protects the public housing it currently has in stock. For an equitable Minneapolis, we must recognize housing as a human right and public housing as a public good.