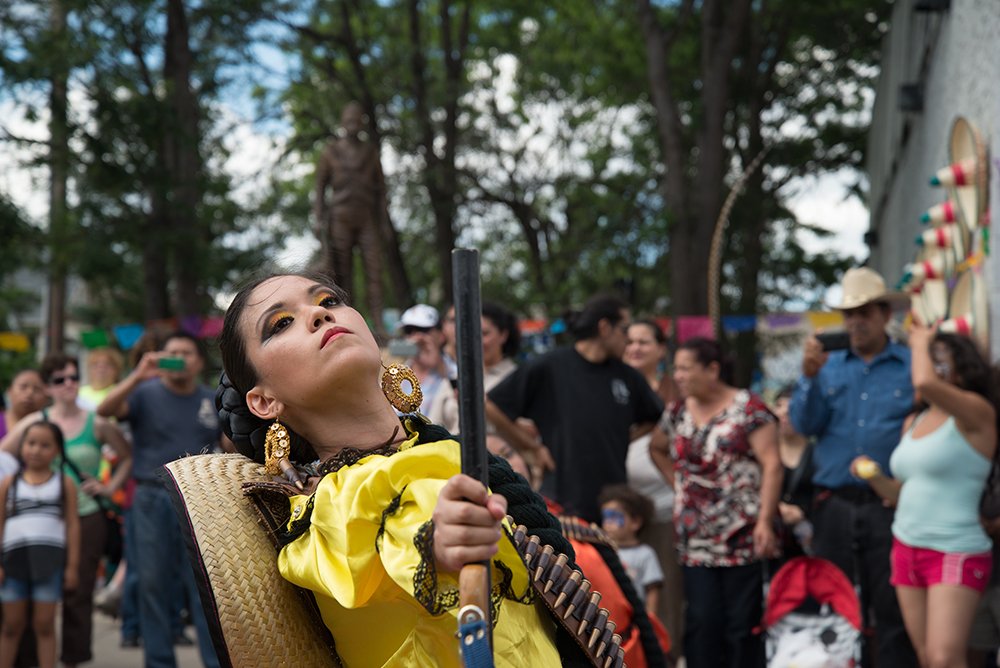 Dancers take over Lake Street, with the statue of General Emiliano Zapata in the background.

Have you noticed the bronze statue in Plaza Centenario, the pocket park at the corner of 12th Avenue and Lake Street? The statue of General Emiliano Zapata, a hero to many Mexicans and a leader who fought for rights for peasants in the Mexican Revolution, was a gift to Minneapolis from the Mexican state of Morelos and installed here in 2013. Amid much fanfare, it finally became official.

Latinos Unidos por la Cultura y el Arte (LUCA) hosted the unveiling of a dedication on the statue at last Sunday’s Open Streets event on Lake Street. Spectators participated in a celebration of General Emiliano Zapata and of this new community pocket plaza with speeches from the many community and government agencies that worked hard to bring the statue to this spot on Lake Street. A musical group with drums and bugles played the Mexican national anthem amid those who stood and saluted. Later, dancers took to the closed off street to mark the festive occasion. Sunday, August 2nd was officially declared Emiliano Zapata Day in Minneapolis. 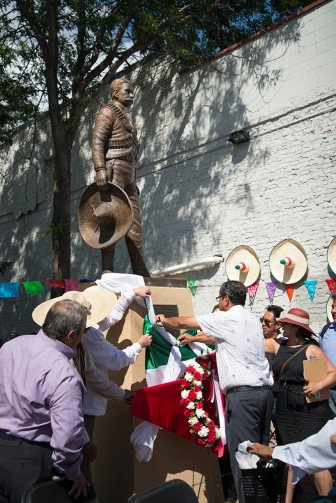 The plaque on the statue of Emeliano Zapata is unveiled

Minneapolis and Cuernavaca, the capitol city of Morelos, have been Sister Cities since 2008. Former Minneapolis Ninth Ward City Council Member Gary Schiff visited Cuernavaca in 2003 to extend an invitation to become Sister Cities. In 2005, it became official. The governor of Morelos himself visited Minneapolis to present the gift of the statue of Zapata. 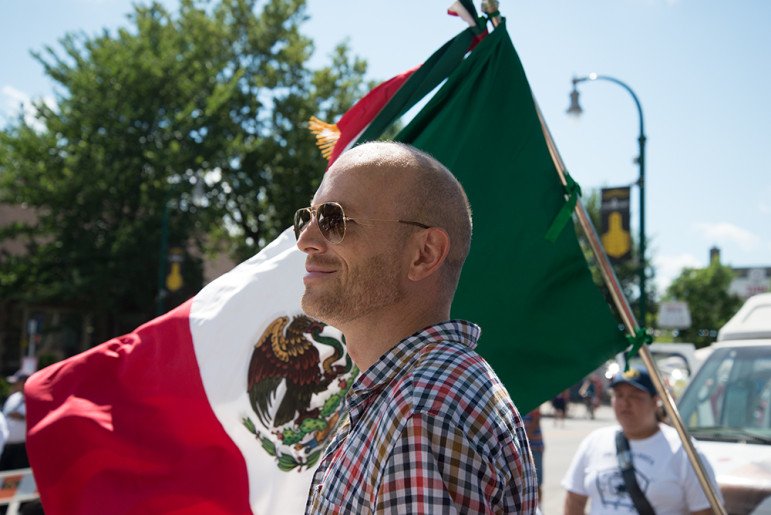 The process of creating, funding this plaza and installing the statue took five years and the collaboration of many community members, civic, and government organizations. Gary Schiff says, “Hennepin county donated the land to the city of Minneapolis. This [plaza] was a vacant lot. Now it’s one of the most prominent gifts of any of the Sister Cities here in Minneapolis. The more that people understand the story of Emiliano Zapata and what he represented to the people of Morelos, the more they’ll understand the next generation of immigrants.”

Fernando Serrano a Morelos government worker, who drove more than 44 hours to transport the statue here from Cuernavaca in 2007, made the trek back to Minneapolis this weekend to participate in the unveiling of the plaque. “I feel really really glad because I saw that the people are happy with the statue. I would probably drive again many times to see the happiness of the people.” 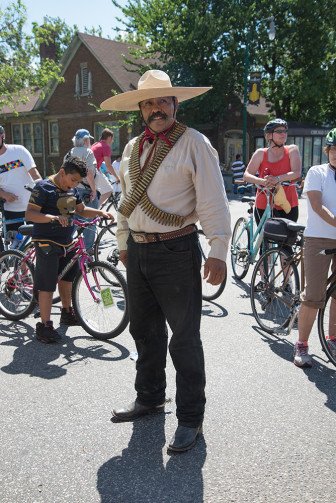 Ruben Urrutia dressed as General Zapata. “It’s powerful for Mexicans to have this sculpture here because Zapata was a revolutionary hero.”

“There’s a Little Morelos in Minnesota,“ says Lucera Cadano and Claudia Montes from Axochiapan, Morelos, and spectators at the Open Streets event. A large number of Mexican immigrants in Minneapolis come from Morelos, birthplace of Zapata.

“The City of Minneapolis helped a lot to make this event happen. We work hard, and we like to have part of Mexico here with us, especially in the heart of the Lake Street. It’s very important to all of the Mexican people who live here, ” says Cadano.

Current ninth ward city council woman Alondra Cano sees the unveiling and dedication as a beginning to more activity in the pocket park.

“Our office started convening people to talk about how to strengthen Latino arts and culture on Lake Street. And out of that grew this group called LUCA, Latinos Unidos por la Cultura y el Arte, who are now actively promoting the usage of the plaza. They’re going to take out a year-long permit so we can activate the plaza regularly throughout the year. We’re working with the City to make sure that any regulations in place to use this space are accessible to community members here. We want to see weddings here, we want to see nighttime concerts, youth doing poetry. So this is just the beginning.” 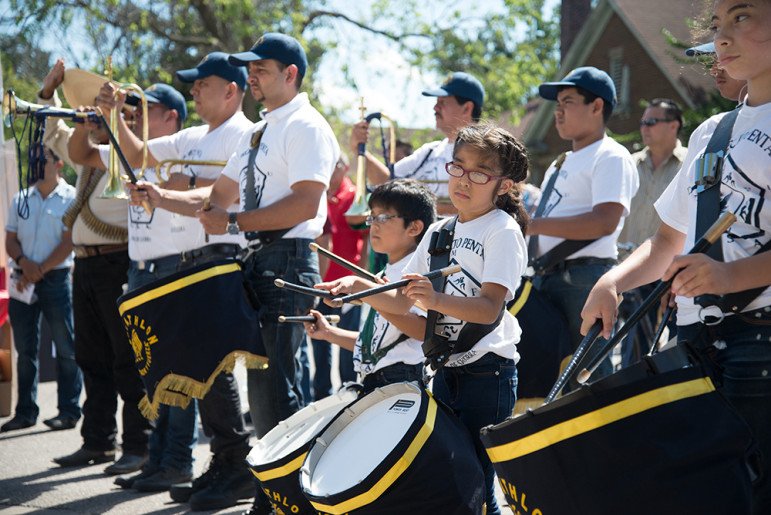 A musical group plays before the unveiling of the plaque.

“The plaza gives us a point of convergence,” says Susana De Leon. ”This [plaza] will not be only for mexicanos. The spirit of Zapata is too great to just represent our people. He was an indigenous leader. So if you embrace your indigenous roots, then more reason to celebrate that Zapata stands for an idea, which is liberty. And not just the kind of liberty you get from the government, but liberty that you forge for yourself. That’s why it’s so important to many of us.”