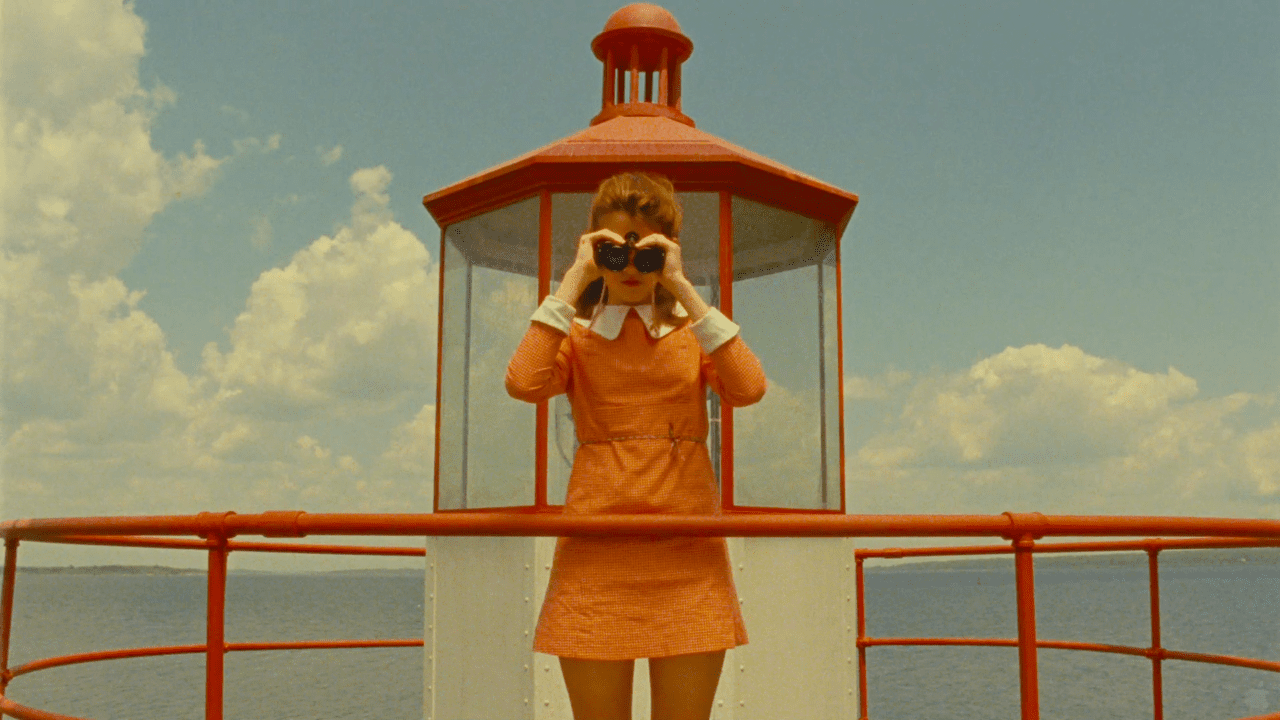 Pre-pubescent love gets the film treatment in director Wes Anderson’s Moonrise Kingdom. The film is beautifully shot, contains heartwarming and peculiar acting by both cinematic unknowns and veterans, and it is written in a whimsical fashion. It’s a quiet, nifty little movie amongst swaggering summer blockbuster giants, but it deserves your attention all the same.

The year is 1965. The place: New England island “New Penzance.” On one end of the island, an orphan named Sam Shakusky (Jared Gilman) has just caused a stir at the “Khaki Scout” summer camp. Sam fled the camp through a tidy hole cut in his tent. He left a letter of resignation for Scout Master Randy Ward (Edward Norton). Sam’s running off is damaging to Randy’s psyche, for the Scout Master runs his camp with routine efficiency that’s not quite into drill sergeant territory, but still army influenced. Stunned, Sam alerts Captain Sharp (Bruce Willis), the leader of the Island Police. Captain Sharp, who lives alone in a houseboat that would make Travis McGee proud, gets search parties organized. The chase is on.

At about the same time Sam ditched Khaki Scout camp in a miniature canoe, a girl about the same age named Suzy Bishop (Kara Hayward) ran away from her home on the other side of New Penzance. Suzy is emotionally troubled. Her parents, Walt Bishop (Bill Murray) and Laura Bishop (Frances McDormand), even bought a self-help book about how to deal with a distraught, hard-to-handle youth. Suzy found this book and was angered at the sight of it, but that’s not the only reason she left. The other, larger reason is Sam. They met at a church play one year ago and really hit it off. They’ve written to each other ever since, and planned their simultaneous getaways.

Sam and Suzy meet in one of the island’s secluded meadows. They set off into the woods to live a new life together. Their driving force is a pure, innocent love for one another. This love makes the steep hills, slippery rocks, and occasional thirst seem like dim afterthoughts to the youths; they’re too busy being quietly absorbed in each other to notice nature’s misgivings.

The island is a finite space, however, and Captain Sharp is on the case. It’s only a matter of time before Sam and Suzy’s young love will face the judgmental, overthinking eyes of “mature” adults. Will that love become tainted, ruined beyond repair, when that moment arrives? This is the question Wes Anderson inserts into his viewers’ minds, and it’s a question worthy of being contemplated from every angle until you see the real answer onscreen.

The two leads are movie rookies, bearing the glare of Anderson’s spotlight more than any other cast members, and often doing so together. It’s crucial that they share a believable romantic chemistry for the movie to work overall. Young love isn’t the only topic being explored here, but it’s the dominant one, and viewers should be able to watch love develop without groaning at sappiness or snickering too much at awkwardness.

Well, Gilman and Hayward pull it off. It’s an amazing feat, really. Their characters are introverts, quiet observers rather than loud livers, so body language is their main communication channel. It’s more difficult to show love through the eyes than out the mouth, so it’s especially impressive how Hayward elicits double takes from the way she holds her fierce, passionate gaze long and steady on Gilman. The young lad opposite her stumbles at times with dialogue and expression, reminiscent of a nervous child chewing over his lines in a community play. Overall, though, Gillman creates an intriguing hero. At first glance he looks like the gawky boy next door with wire-rimmed glasses and a small build. But in time you see his resourcefulness with everything from campfires to air rifles, from smoking a pipe to really listening to his soul mate. Gilman is easy to root for.

All of the adult roles are wonderfully portrayed and very fun to watch. Anderson expertly sprinkles in adult-dominated scenes into Sam and Suzy’s love story; he interrupts the romance enough times to keep it fresh and make you realize that there’s a lot going on at once.

Love doesn’t just exist in Sam and Suzy’s storyline, however. It also exists in the adult scenes. Though it isn’t thriving so much as dying. An affair is brewing in the Bishop house. Laura sneaks away at night on her bicycle, handlebars pointed at the Captain’s house on the water. Walt knows. The Bishop family’s infrastructure gets wobblier every day. Love for the adults has become a complicated, oftentimes bitter thing. Anderson forces you to compare the tarnished love of adults to the fresh love of youths, creating parallel storylines that feed off one another.

The adult cast consists of Bruce Willis, Edward Norton, Bill Murray, Frances McDormand, Tilda Swinton, Jason Schwartzman, and Harvey Keitel, among others. They’re all fantastic. They engorge themselves in Anderson’s nostalgic, goofy, quirky energy and forget about any precedents.

Willis and Norton stood out to me the most because just by being in a Wes Anderson movie, the two gentlemen make a statement by taking big steps away from their traditional high-drama, high-action, high-stakes genre films. I mean, we’re taking about John McClane and freaking Derek Vinyard, here! These fellas are tough guy icons, so to see Willis in thick-rimmed glasses and Norton in knee-high scout socks is a treat in itself. Their dialogue is also rich and at times, unconventional. The casting by Anderson and his team is splendidly on-target.

Even if you’re new to Anderson’s idiosyncratic style, you should check out Moonrise Kingdom. It’s odd and a little uncomfortable at times, but it excels in telling a realistic tale of puppy love. The adults act like adults. The kids are kids. The story is vibrant. Add some popcorn, and what else do you need?

Moonrise Kingdom is rated PG-13 for sexual content and smoking. It was given a limited United States release on May 25, 2012. It has a runtime of 1 hour and 33 minutes.