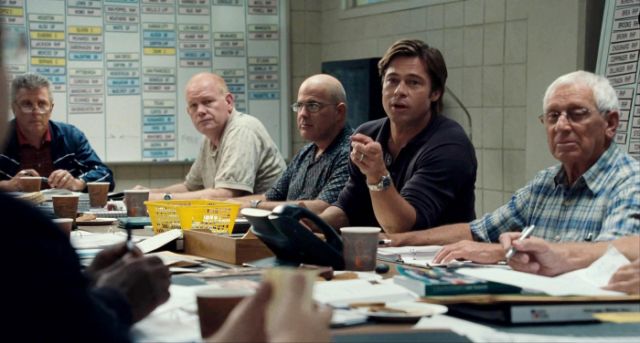 Directed by Bennett Miller, “Moneyball” is based on the true story of Major League Baseball’s Oakland Athletics general manager Billy Beane, who in the early 2000s rewrote the book on scouting ballplayers in an effort to take his floundering baseball team to the top. The script and performances make this movie worth watching, but it doesn’t cover all the bases when it comes to satisfaction.

After a 2001 season in which the A’s lost in the divisional round of the playoffs to the juggernaut New York Yankees, Beane sits down for a meeting with his team of veteran scouts. Some restructuring of the ball club needs to happen, because three of the team’s superstars–Johnny Damon, Jason Giambi, and Jason Isringhausen–were lost to free agency in the offseason, lured to bigger payrolls. Beane doesn’t like what he hears at the meeting; he thinks that his scouts are trying to replace things like Giambi’s big bat with unrealistic expectations of whoever they can pick up on their paltry budget.

So Beane starts heating up the phone lines and hitting the road, trying to negotiate trades with other teams’ management. At a meeting in Cleveland, his attempts to get a key ballplayer are quietly shut down by a whispering, chubby man in the background. Beane later confronts this man and finds out his name is Peter Brand (Jonah Hill). Brand, a Yale economics graduate, tells Beane that his actions in the meeting were driven by his unique theory on how to gauge the worth of a baseball player. Brand selects players based on their on base percentage (OBP), the number of times they get on base. He also incorporates numerous mathematical equations that he punches into the computer to organize all players into a new hierarchy of value based on his methods. This deep statistical analysis is new to Beane, and most of MLB, but he takes a liking to it because Brand’s system shows how players who are cheap to buy could potentially compete on the same level as the New York Yankees. Brand soon finds himself purchased by the A’s, and the offseason really heats up as Brand’s system is put to work finding new faces for the Oakland franchise.

Pitt conveys the busy life of a baseball general manager exceptionally. He smiles and jokes appropriately in negotiation talks, while behind the scenes he throws chairs in the hallways in fits  of frustration. Pitt makes Beane believable as a man who will do anything to see his team, and his new method of winning, succeed. This intensity does not always make his life easy. He’s a recently divorced man, and does his best to make time for his daughter. The thought of losing makes him so jittery that he can’t even watch his team’s games; he instead works out rigorously in the gym underneath the stands. The A’s manager, Art Howe (Phillip Seymour Hoffman), begins butting heads with Beane because he feels his authority is being undermined. Already disgruntled with being stuck with a mere one-year contract, Howe is exasperated at Beane’s insisting that his and Brand’s selected players be started. Beane’s ferocious energy clashes with Howe’s tiredness in a captivating way.

Hill is wonderful as Brand, the glasses-wearing new age baseball theorist who quietly defends his ideas with formulas and stat sheets. It’s interesting to see Brand slowly become an integral part of the A’s organization. At first he reluctantly speaks at scout meetings while enduring hate-filled eyes from the rest of the staff. By mid-season, though, he holds regular discussions with many of the A’s players, telling them how they can improve their batting averages or throw more strikes based on his computer generated statistics.

One of the products of Brand’s theory is Scott Hatteberg (Chris Pratt), a catcher who wasn’t getting any job offers in the winter due to a lingering arm injury. Brand and Beane recognize that Hatteberg can get on base quite frequently and sign him to be their first baseman. Chris Pratt does an excellent job showing how frightening it can be for a player to switch positions. His exasperated humor is more than welcome to the movie, and adds another human element to the clubhouse.

The script, written by screenwriting veterans Aaron Sorkin and Steven Zaillian, along with Stan Chervin, is multi-dimensional. Witty jokes will have you chuckling for most of the film, but there’s also a sense of dire urgency throughout the meetings and clubhouse interactions. The point that Beane will become an outcast from baseball if Brand’s theory fails definitely gets across to viewers, adding some serious drama to the flick.

Miller’s movie is especially relevant, and perhaps extra enjoyable, to Minnesotans. This is because the A’s storyline intersects with the Minnesota Twins. During the 2002 season, the A’s played the Twins at the pinnacle of their record breaking winning streak, and faced them again in the divisional round of the playoffs. Twins fans will feel jolts of nostalgia when they see some familiar faces from that magical year.

Even though this is a film centered on front-office dealings, it could have benefited by giving the A’s players more screen time. Pratt gets a few moments to take center stage, but it’s not enough. Miller should have allowed viewers to get to know more of the players through increased dialogue and on-field shots. Instead, the players are a gray area that you never can fully invest in emotionally.

The movie’s ending is also a letdown. Like “Limitless” and “30 Minutes or Less,” two features which also came out in 2011, the final fifteen minutes of “Moneyball” are rushed and out of place. Characters’ stories don’t get a proper send-off. This seems to be a growing problem in Hollywood, and a disturbing one at that.

All in all, Miller’s careful direction, the entertaining screenplay, and many intriguing characters make this film one you have to see, whether you like baseball or would rather knit on the front porch.

“Moneyball” is two hours and six minutes long, rated “PG-13” for some strong language, and was released in home media format on January 10, 2012.