A state program intended to help integrate school districts and balance academic opportunities for children of all races has actually resulted in increased racial segregation.

A new University of Minnesota analysis finds that more white students than students of color across the Twin Cities metropolitan area are leaving racially diverse districts to enroll in predominantly white districts, a variation of the “white flight” of the 1970s and 1980s when white families up and sold their homes and moved away from changing demographics in urban school districts or sent their children to private rather than public schools.

Further, according to the analysis, the trend is growing stronger. The study recommends that the state monitor and correct the situation.

What we’re talking about here is the open enrollment program which became law in Minnesota in 1988 and that allows families to enroll their children in nearby school districts outside the neighborhoods where they live. It also gives districts certain rights to refuse students from other districts.

Key findings from the study released today and covering the metropolitan area’s 69 school districts should attract the attention of legislators.

When considering study results, keep in mind that overall, schools in the 11-county Twin Cities area are still majority white, about 70 percent, according to stats from school year 2009-2010, and that partially explains why more white families have opted for open enrollment. 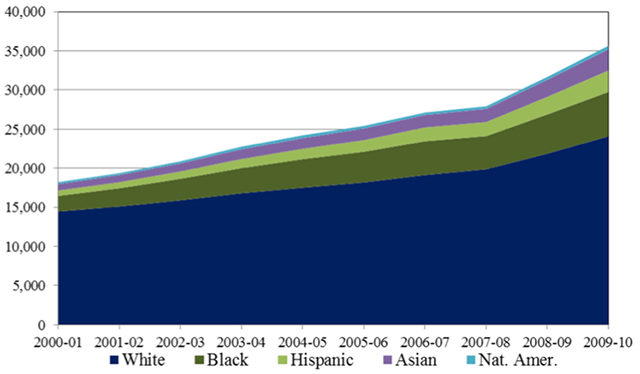 It’s also noteworthy that non-white students open-enrolled both into urban districts from the suburbs and vice versa.

Still, the analysis concludes, while racial integration does occur in many instances with the movement of students between districts, “overall [open enrollment] increased segregation in the region, with the segregative trend growing stronger over time.”

The urban districts in Minneapolis, St. Paul and St. Cloud have lost “substantial numbers of students” because of the program, with the majority of the loss being white students, the study points out.

The analysis was carried out and released by the Institute on Metropolitan Opportunity of the University of Minnesota Law School. (The institute had long been called the Institute on Race and Poverty but has broadened its focus.)

Among suburban districts losing the most students to the program are Columbia Heights and Richfield, which are also experiencing rapid racial and economic transition, “a process that [open enrollment] has clearly facilitated by enabling the loss of white students.” 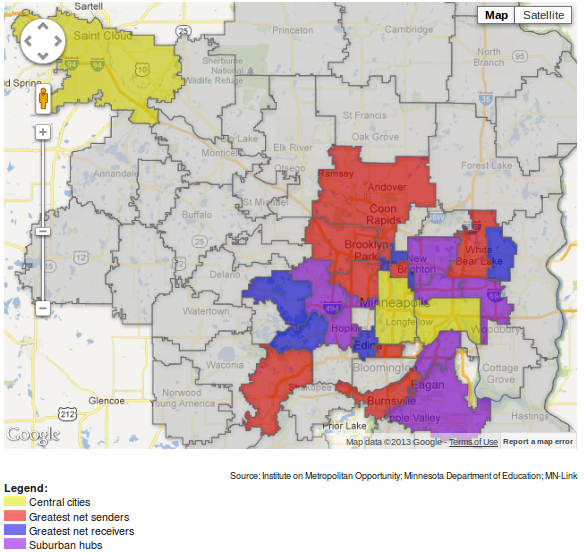 On the other hand, districts gaining the most students from open enrollment are predominantly white districts becoming whiter. The St. Anthony-New Brighton district has become a magnet for white students transferring from poorer and more diverse Columbia Heights and Minneapolis districts. White open enrollment to St. Anthony now makes up more than one-third of the student population.

It’s also noteworthy that non-white students open-enrolled both into urban districts from the suburbs and vice versa.

The open enrollment law is well-intentioned, yet problems naturally arise, says Myron Orfield, director of the Institute on Metropolitan Opportunity, and a researcher who has long-studied integration and segregation in Minnesota schools.

To start, he says, more white students participate because it is easier for more well-off families – who tend to be white — to consider open enrollment. They have cars and so can drive their children to school in a neighboring district.

Orfield says the analysis shows that some districts, such as Hopkins, keep to the spirit of the law, recruiting and accepting enrollment of children of all races, while others apparently do not. For example, some districts a while back openly recruited unhappy, white Eden Prairie families when that district implemented attendance boundary changes to more fairly integrate their schools.

That isn’t equitable, Orfield says. “Districts should be fairer to each other. They should recruit not only white, affluent kids, but non-white, less-affluent kids.’’ If they can’t do that on their own, the state should step in, he says, indicating that Institute researchers welcome the opportunity to testify before legislators.

University researchers call for a renewal of the state’s Integration Revenue Program, due to disappear in 2014, but also for changing its funding formula to “target funds more efficiently to districts which are doing the most to actually integrate schools and classrooms.’’

That’s in line with a new report from the Education Finance Working Group, a policy panel of the Minnesota Department of Education, which recommends that districts with higher concentrations of students of color receive more integration dollars.