A welfare-fraud prevention measure goes into effect this week at a time the Minnesota Department of Human Services characterizes the numbers of food stamp users as at “historic highs’’ here and around the nation.

Total users in the state have nearly doubled since 2006 with the fastest growing group being hungry children. Their numbers increased by 150 percent since December 2006. Almost half of the caseload is adults.

Nearly 546,000 Minnesotans use the food aid program commonly referred to as food stamps but officially called SNAP (Supplemental Nutrition Assistance Program) at the federal level, according to an annual report of the Minnesota Department of Human Services. 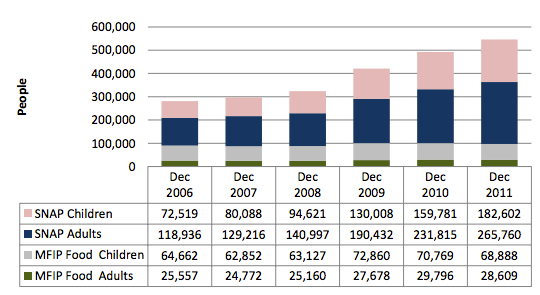 Now, due to a measure passed by the Minnesota Legislature, the name of the head of the household will be printed on the plastic cards that give users access to the Supplemental Nutrition Assistance Program (often referred to as food stamps) as well as to cash benefits administered through such programs as General Assistance and the Minnesota Family Investment Program.

In addition, the Legislature also required the cards include this warning: “It is unlawful to use this card to purchase tobacco products or alcoholic beverages.’’

Previously, no name had been printed on the electronic benefit transfer (EBT) card, which operates like a debit card with food purchases. An additional adult may, however, be issued an EBT card for food benefits only, the Minnesota Department of Human Services advises.

Though SNAP-eligible adults increased by 123 percent, the racial and ethnic composition was unchanged with about 60 percent white people, 25 percent blacks, 7 percent Asian and Hispanics and American Indians at 4 percent each.

Though calling the economy the “underlying reason” for the increase, the report also catalogs a waiver that allows longer usage of the program to Able Bodied Adults Without Dependents. 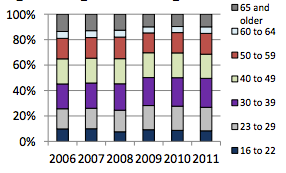 In another demographic change, the proportion of persons 23 to 29 has increased 3 percentage points and those ages 30 to 39 have risen by 4 percentage points. There are fewer users age 65 and older.

The report, finished in August and posted online in September of this year, reflects numbers of users in December 2011. You’ll find it here and titled “Characteristics of People and Cases on the supplemental Nutrition Assistance Program December 2011.’’

As for fraud, the department of human services says its fraud-prevention investigators in fiscal year 2011 investigated 6,900 cases of alleged fraud and stopped or reduced benefits in 47 percent of those cases.

Republicans, including Rep. Steve Gottwalt, R-St. Cloud, had argued during the last legislative session that “welfare reform” measures were “intended to tighten up” welfare programs. “Minnesotans want to help the people truly in need,’’ Gottwalt told me last winter.