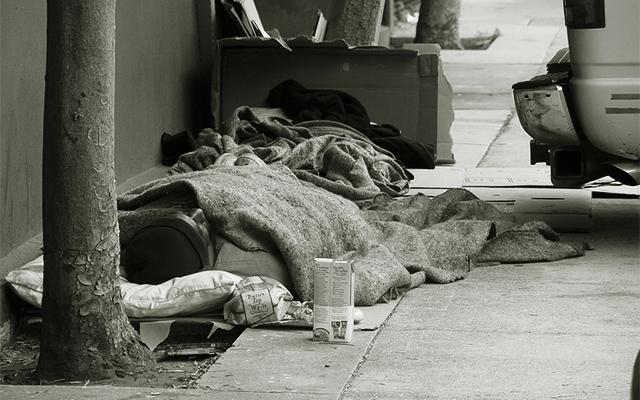 Analysts at Wilder Research are slowly revealing the people behind the numbers of Minnesota’s homeless counted last fall. (Photo by Franco Folini/Creative Commons)

Like peeling the skin off an onion, analysts at Wilder Research are slowly revealing the people behind the numbers of Minnesota’s homeless counted last fall. They’re digging deeper into the data.

Among some 5,000 homeless households across the state are youth moms with babies, single adults with drug problems and two-parent families and their children. Some are employed. Nearly half (46 percent) are children themselves — that is, age 21 or younger — and three out of 10 of those are parents.

Race is a factor. African Americans and American Indians are disproportionately represented in the tallies.

African Americans and American Indians are disproportionately represented in tallies of Minnesota’s homeless. (Source: Wilder Research and the U.S. Census)

Sadly, over almost all there rests the specter of violence, abuse or childhood trauma.

Growing numbers of the homeless are dealing with serious mental illness or chronic physical health conditions. Substance-abuse problems range from 16 percent among youths to 22 percent for adults. Sixty percent of the youth have a parent who has been incarcerated.

In March Wilder announced a preliminary count of the state’s homeless — 10,214 adults, youth and children as tallied on one night last October and some demographic information. The report released Tuesday afternoon, April 16, is a more personal look.

It is intended as a profile, a four-page fact sheet about homeless persons released now so lawmakers can get a look before the Legislature adjourns. Advocacy organizations can use some of the data to push for passage of legislation concerning affordable housing, child care, early childhood education and jobs training. More details are here.

An example: 41 percent of homeless adults interviewed said they are signed onto subsidized-housing wait lists with an average wait time of 11 months. Others find waiting lists closed.

In May and July, Wilder will issue more in-depth reports looking at context and reasons for homelessness, explains Michelle Gerrard, co-director with Greg Owen at Wilder of the homeless study.

As for this report?

“There’s some good news and some bad news,’’ says Gerrard, one of a team of Wilder authors of the report, which details 45-minute interviews conducted last fall of persons living in emergency or battered women’s shelters, transitional housing or other temporary locations.

There are 6 percent more homeless persons than were counted in 2009, but the increase is nowhere near the 25 percent jump seen between 2006 and 2009.

Over-represented among the homeless are the 37 percent African-American adults, a group that makes up only 5 percent of all Minnesota adults, and the 10 percent American Indians who make up 1 percent of the state’s adult population, the researcher said.

The prevalence of violence and abuse startled me, something Gerrard called “a little bit surprising.’’ More than half of adults had experienced physical or sexual abuse, neglect or were sent to live outside their biological families. Among youth, 77 percent suffered from some childhood trauma, she said.

Histories of trauma and long-term health issues are common

Another rising trend is health problems, she said. Mental illnesses have “continued to go up since 1991,’’ since the studies began, she says.

Chronic physical health problems seemed more noticeable last fall when she was doing interviews, she said, recalling persons with breathing problems or in need of walkers. Data confirmed the problems.

Advocate Liz Kuoppala, executive director of the Minnesota Coalition For the Homeless, says the findings speak to the effect of adverse childhood experiences and the need to strengthen societal safety nets so people can use them as “a ladder to climb out of poverty.’’ Her organization is a member of Homes For All, a coalition of housing advocates, service providers and developers working for comprehensive housing solutions at the Legislature.