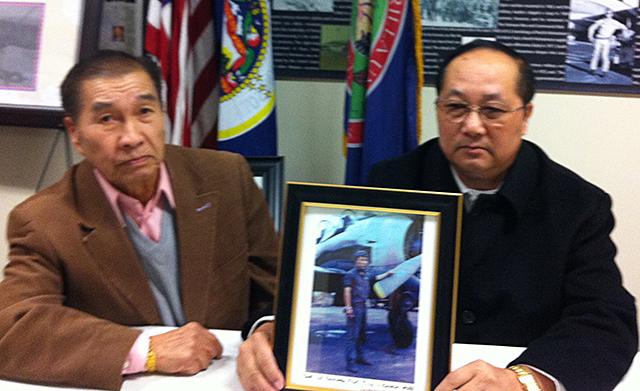 Zachor Lee and Neng Moua fought with American soldiers in Laos during the Vietnam War. They hold a photo of a friend who died in military action. (MinnPost photo by Cynthia Boyd)

For most of us the Vietnam War has taken its place in U.S. history books.

Yet for about 400 older Hmong Minnesotans who fought with U.S. troops during the war in northern Laos, there is a wound still unhealed.

These fighters are not recognized as veterans of the U.S. military nor entitled to the benefits of having served, a fact they sorely remember this time each year as the nation observes Veteran’s Day and Pearl Harbor Remembrance Day.

U.S. law prohibits them from being buried in national or state veteran’s cemeteries. They receive no medical or pension benefits. Their names are absent from the Vietnam Veterans’ Memorial in Washington, D.C.

Among them are men in their 60s and 70s who gather regularly at a down-at -the-heels clapboard building on Arcade Street on St. Paul’s East Side to retell war stories of the covert operation conducted by the CIA, stories about retrieving bodies of American pilots whose helicopters had crashed, of serving as medics, fighters, translators, radio operators, and, then, after the war, suffering devastating consequences.

They gather to share some of their history, a gallery of photographs of men in Vietnam-era uniform lining a wall.

Youa Thoa Vue, was recruited by the CIA at age 12, “too young to pull the pin on a grenade,’’ he says.

Neng Moua, medical assistant, mission officer, translator, fought and was wounded when Communists shot up the helicopter he was riding in.

“In 1975 we lost the war and the Americans left us behind. I was captured by the Lao Communists and was POW,’’ Moua tells translator Cassandra Lo, a young staffer with the group, called the SGU (that’s Special Guerilla Units) Veterans and Families organization.

Fighting for the Americans, Yang Dang Chang stepped on a land mine and lost part of his left leg.

Once the Americans pulled out, Communists enslaved many in prison camps, setting up work gangs.

Za Chor Lee, 75 and vice president of the SGU St. Paul Chapter, who held the rank of captain with the Americans, was forced by his captors after the war to eat rice and leaves mixed with sand. They wanted them to die slowly, translates Lo.

But Lee’s greatest sorrow was the death of his 18-year-old son, he tells me through Lo, tears pooling at the corners of his eyes. The boy was forced to clear away unexploded bombs and died in an explosion.

Though there have been numerous efforts to award these men military status, including a bill in the 2012 Minnesota House, the efforts have been unsuccessful.

Arguments against include fears that granting this group the rights of veterans would set a precedent and would have to be offered to other soldiers fighting on the American side, including Vietnamese, Iraqis, Afghans and Somalis.

Other opponents argue there would be difficulties in substantiating Hmong veterans’ claims of military service, that extending benefits would be extremely costly and crowd cemeteries.

Still, the United States opened its borders to these Hmong veterans and their families, offering opportunity, a better life and sometimes Social Security disability payments. More than 60,000 Hmong live in the state.

For all that, they are thankful. What they lack, says Chang, is recognition of their military past, their service to this country.