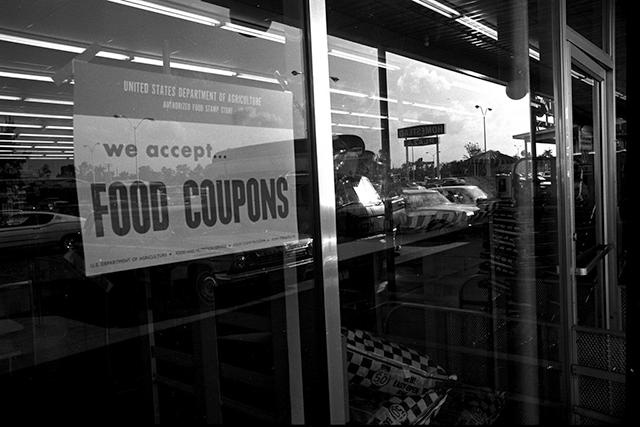 Food-assistance funding in the bill won’t have an impact here because Minnesota officials didn't use a heating-assistance loophole to get more food stamps for hungry residents as other states did. (U.S. Department of Agriculture)

From where Byron Laher sits, the economy and the bitter-cold will have a more profound effect on Minnesotans needing food than the reported federal farm bill deal in Washington.

Laher is thinking of people whose jobs have been down-sized, like a Target employee he met with Tuesday morning, as well as low-income folks walloped by soaring heating bills. They’re straining to pay bills and still eat.

Not to forget those low-wage service employees sent home because frigid temperatures keep buyers home and business slow, he said, and an economy slow to bounce back in the low-wage sectors.

Food-assistance funding in the bill won’t have an impact here because Minnesota officials didn’t use a heating-assistance loophole to get more food stamps for hungry residents as other states did.

That loophole is reportedly closed in the new version of the farm bill and is the source of the about $8 billion over time in cuts to the food-aid program across the country.

The Minnesota Department of Human Services confirmed there should be no effect on SNAP benefits for Minnesotans, though adding that staff is still analyzing the agreement.

Yet emergency food providers still have cause for worry, said Colleen Moriarty, who heads up Hunger Solutions Minnesota.

Low-income Minnesotans are already feeling the effects of recent decreases in SNAP budgets, including the end of the American Recovery and Reinvestment stimulus program and the loss of an Able Bodied with Dependents waiver, she said. She’s concerned SNAP is an ongoing target for those wanting to trim the federal budget.

For instance, a low-income family of four lost $36 a month in payments beginning last November, which makes a big difference over a year’s time, pointed out Laher.

Pile on top of that the fact that the economy just isn’t picking up for people with low skills in low-paying jobs, Laher said, and you’ll see why food needs aren’t diminishing.

Monthly numbers are up at both of CEAP’s food-shelf locations, from 900 to as high as 980 households some months in Hennepin County and increasing from 650 families to 700 in Anoka County.

That brings us back to people whose budgets are shrinking. Take the Target employee mentioned at the top of the story. He’s someone Laher would see every once in a while at the food shelf.

Though the man had been working 40 hours a week in an electronics sales department, he was also working his way through school, so being down-sized to seven hours a week is a blow. His wife’s income as a home-care aide goes up and down. He’s looking for another job, but that could be hard to find. Consequently, he’ll likely be shopping at the food shelf every month now rather than the more typical three or four times a year for most families.

“They are nice folks. They are working hard. They’re just not earning enough to take care of their needs,’’ Laher said.