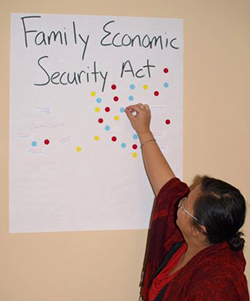 Advocates for the poor "voting" for anti-poverty issues they support. (Photo by Ron Maeker)

Sometimes less is more, the Cliff’s Notes version way more readable and meaningful than the unabridged.

So, with a tip of the hat to anti-poverty conference convener Nancy Maeker who sparked the idea, “listen in” to provocative and memorable comments overheard at the Connecting to End Poverty conference Wednesday, a rally called by “A Minnesota Without Poverty” and involving some 40 non-profit advocacy groups.

Their goal? According to Maeker: “to reinvigorate and move forward” the recommendations of the Legislative Commission to End Poverty by 2020 (LCEP), issued in 2009, and to urge advocates to decide which issues they can put their collective weight behind and bring to the 2013 Legislature.

Spoiler alert: “A Minnesota Without Poverty” will release an official ruling in days to come, but preliminary voting results show a majority of the group ready to stand behind a Family Economic Security bill that would, among other changes, increase minimum wage to $9.50 an hour.

They also support in large numbers a measure that would require a poverty-impact analysis with proposed laws that would affect low-income Minnesotans.