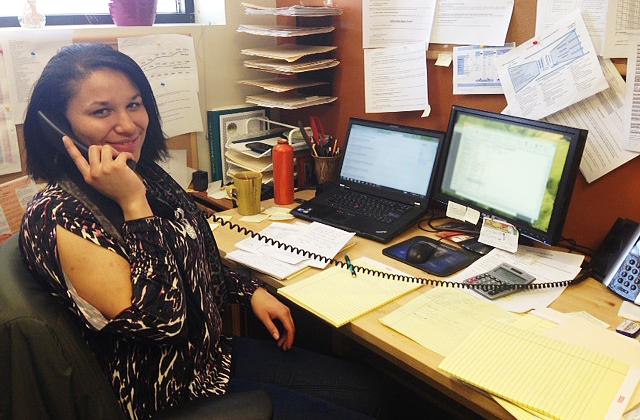 Lina Warner was homeless at age 17, but at 22 has a place of her own, is working and attending college. (Photo by Frances Roen)

After Minnesota officials announced Tuesday that more money would be going to organizations that help homeless youth, I talked with Lina Warner, one example of at least 1,000.

One thousand is the latest official number of young people around the state who are homeless and out on their own, chicks unprepared to leave the roost. Warner used to be one of them.

“Serving homeless youth is an urgent need,’’ Minnesota Department of Human Services Commissioner Lucinda Jesson said in announcing a list of 30 organizations across Minnesota that will be providing additional services to young people using $4.2 million in funding from the Homeless Youth Act, supported by Gov. Mark Dayton and passed by the Minnesota Legislature last year. Advocates for homeless youth had asked for $8 million.

“Providing these services now can lead to hopeful days ahead and bright futures,’’ Jesson said in a statement.

Trekking along that brighter path is Warner, age 22. She says she was helped by YouthLink in Minneapolis, a nonprofit that last year worked with more than 2,200 youths ages 16 to 23 to provide basic needs, find secure housing and move toward financial stability.

YouthLink will receive $144,000 over two years in state money. It will be used to help fund their drop-in center where youth can find a meal and clean clothes, take a shower, use laundry facilities or connect up with Youth Opportunity Center partners — 30 different community agencies offering medical, educational, housing and employment services.

That Youth Opportunity Center model is one of only two in the country, said Heather Huseby, executive director of YouthLink, which started serving youth on the streets 40 years ago. Youth served mostly range in age from 18 to 21. Many are chronically homeless and need services to “turn their lives around,’’ Huseby said.

After a childhood of moving from place to place and tired of a mom who had “never really been there” for her, Warner said, she took off on her own at 17 because she didn’t want to have to change high schools yet again. She chose to stay put and graduate.

The next five years she spent “bouncing around from place to place, kind of couch-hopping” at the homes of friends, paying rent in cash or food stamps, she said, while working a series of temporary and seasonal jobs.

During that time she’d dropped into YouthLink for help finding part-time jobs, food, clothes, bus passes. “They were pretty much there,’’ she said.

She also worked jobs in restaurants, at a pet hospital and as a metal worker, a sales associate and a personal-care attendant, not ready to settle down and get focused on school.

Then last month, with financial support from YouthLink and the S.T.A.R.T. (Surviving to Thriving A Real Transition) program, she moved into her own one-bedroom apartment in Anoka with big windows, a walk-in closet and an outdoor pool, paying $430 in monthly rent. She also started classes at Anoka Ramsey Community College.

She works part time as an intern for YouthLink in their development office, for $10 an hour.

S.T.A.R.T., a collaboration between YouthLink and Outward Bound, also offers experiences like indoor rock-climbing, cross-country skiing and canoeing to challenge young people and give them a different perspective on life, said Nate Hurliman, S.T.A.R.T. transitions coach. The program helps youth set and accomplish goals and gain more self confidence, he said.

Warner said the S.T.A.R.T. program and a rock-climbing exercise helped her realize that not only could she climb 30 feet up, but that she also could do what she set out to do, namely go to college and major in zoology.

“What we’re really doing is [helping them] transform very quickly their lives into being able to believe in themselves and to live independently in a positive way,’’ Huseby said.