Minnesota has been something of an outlier compared to almost every other state. Most states have Democratic cities, Republican rural areas, and competitive suburbs. We have long flipped those last two. This last election though, the state house election looked pretty typical of what might be expected in almost any randomly chosen state.

This raises some questions, namely:

— Is this trend of reddening rural areas and bluing suburbs really happening here? Didn’t I just say it was, one paragraph ago? I actually have my doubts, about which more later.

— Why is this happening? I won’t actually spend much space on this because there seem to be multiple plausible explanations, which can be simultaneously true, so it’s more complicated than can be dealt with here.

— How do we respond?

I used this chart repeatedly in that series on Democrats needing to do better with white voters, but that was nearly two years ago, so here it is again: 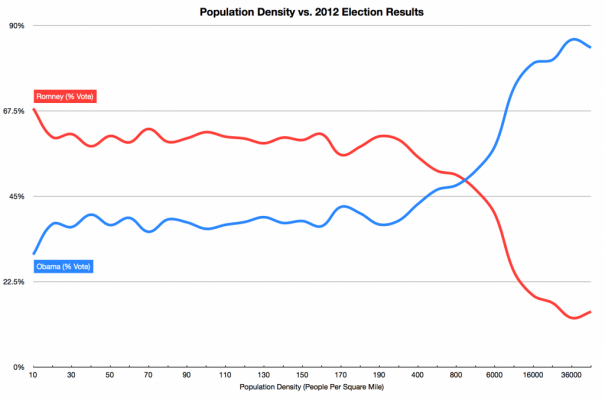 Source: The Washington Post’s Wonkblog, “2012 The Year in Graphs”

I haven’t seen a 2014 version of that chart, but I doubt it would be meaningfully different. In one of those correlation versus causation conundrums, the chart doesn’t tell us if population density causes voters to vote the way they do, or if it just correlates to whatever else is going on. My best guess is it’s partly both, meaning my thinking — and I hedge because I don’t claim to know — is that people otherwise inclined towards liberalism have greater comfort with if not a preference for greater density, but maybe higher density simultaneously influences people towards liberalism; conservatism, visa-versa.

But that’s the how. Getting back on the what, that chart matches what happened in the state house races, where the MNGOP made it’s gain in rural districts, plus a third tier suburban district (56B) and a smaller metro area (St. Cloud). If we look at where Al Franken and Mark Dayton got their votes we see the basic pattern there, though not quite the same. The top of the ticket won more rural counties than state house candidates generally, and the Northeast remains deep blue, but the bulk of votes are coming from the central cities and inner suburbs. However, it’s not a perfect overlap, and looking at all that rural blue in their races puts doubt on the notion Democrats can’t compete outside the metro area.

And then there are the congressional districts, which don’t fit the theory particularly well. They fit the pattern I’m suggesting is fading in Minnesota like it has in the rest of the country, since the rural districts are blue and the suburbs are red. There are nuances of course, stemming particularly from the historical accident that we have twin cities instead of one big city. I’m not going to go into the history here. I went into it here if you want the story. Suffice to say we have two cities where other major metro areas have one, and each twin has a congressional district it shares with some of its suburbs. Were they combined into one city, assuming we try to keep municipalities in one district which is actually how our redistricting was done, this hypothetical Paulapolis or Minneapaul would be almost exactly one district, and their blue inner suburbs would give the DFL at least one suburban district. As it is, our suburban districts tend to be a mix of second and third tier suburbs with rural area, so they sort of do fit the new pattern, but not so well that I shouldn’t acknowledge the anomaly. As for the three rural districts, I suspect we hold the 7th from incumbency (though the results for statewide candidates suggest another Democrat could be competitive), the 1st from a mix of incumbency and two smaller metro areas (Mankato and Rochester) and the 8th, which is pretty deep purple, because the Northeast is one of those exceptions to Democrats being unable to compete in rural areas, plus great turnout in deep blue smaller metro area Duluth to balance out the district’s Twin Cities exurbs.

So the bits that don’t fit the red-rural purple-suburb pattern give me reason to think it’s not a forlorn hope for Democrats to compete in rural areas. Besides, there are other exceptions, like the deep blue state of Vermont. Sen. Mark Begich made it close in safely Republican Alaska partly by finding a way to extend his groundgame to isolated native villages, and Alaska had the lowest drop-off from 2012, which I doubt is coincidental. Still, those are exceptions. Look at a US map colored by congressional district, and it looks like a red sea with blue islands.

Which means a few things:

— The pattern isn’t perfect, but there’s enough there to say rural areas have become or are becoming more Republican, while inner suburbs have been or are becoming Democratic, with second and third tier suburbs generally the battle ground between the parties.

— Republicans have a structural advantage in anything districted because Democrats tend to inhabit densely populated areas, so only some radical gerrymandering can prevent Democrats being packed into deep blue districts, while heavily Republican areas can be divided multiple ways.

— We have a problem with white voters. The exceptions, meaning the rural areas where Democrats do well, are usually in states where Democrats generally do better among white voters, like Minnesota, or they’re areas with large non-white populations. Competitiveness in suburbs has coincided with the racial diversification of suburbs, in other words, the more diverse suburbs are where we’ve been competitive or winning. However, Democrats tend to do well with white urbanites and inner suburbanites, so it’s hardly a perfect breakdown along racial lines. So keep in mind we’re talking tendencies, not rules.

But aren’t Republicans handicapping themselves by not competing in cities? Competing would be tough when your message to rural and suburban votes is that the city is your enemy, and the MNGOP message in the rural house districts was playing to rural resentment. They probably goofed by running against the metro area, since they attacked suburbanites too thereby, but I expect they’ll hone their message to just target Minneapolis and St. Paul, so the suburbs don’t feel attacked too. Watch Republican campaigns in other states, and they make the “Real America” sorts of attacks on the state’s big city. So I don’t see how they avoid conceding the cities.

On the other hand, they can afford to. What they’re doing seems to get them elected. Republicans have 30 governorships, 69 state legislative chambers, and both house of Congress. So I don’t see their incentive to reach out to urban areas, and judging by their actions, neither do they. The question in Minnesota is whether Republicans will decide they do need some urban votes to win statewide since they’ve lost every statewide race since 2006 except that year’s gubernatorial race, and they won that by just under 1% while a liberal IP candidate took over 6%. Without that liberal split, they would have been shutout then too, four elections with no statewide wins. Will they decide they need to reach out to urban voters instead of attacking them? If current trends continue, and we become like other states, Republicans might not need the cities at all. Even here.

Yes I know, there’s a midterm drop-off problem. If every election was a presidential year, maybe we wouldn’t be having this discussion — except in 2012 Democrats still lost the US House despite getting a majority of the cumulative vote, and the same thing happened with some state legislatures, so, yes, we would be having this discussion. Just not with quite the same urgency.

One good thing we have going for is us Democratic campaigns may not always know how to reach out to more rural areas, but at least we’re not in the Republicans’ position should they have to reach out to urban areas. They’ll be starting out with, “About our attacks on you for being rotten people taking all our stuff, um, could we agree to forget all that?” But we still have complicated decisions to make, not just about candidates and messages, but targeting when resources are limited. It’s that old problem of whether to maximize turnout in the urban/suburban core, or do better in the deep red sea. That chart on population density doesn’t tell us where we want to win, because we want to win everywhere of course, but it does indicate where we should already be winning. St. Cloud, for example, is a bit to the right of the crossover point on the chart, which predicts it would be a purple that’s more blue than red. Democrats should be winning there, but after this election, we have nothing there. A bunch of the suburbs have a high enough density they should be winnable. In theory, we could find enough seats to take back the majority just in the suburbs. Of course, we could take it back just with six of the rural seats we lost, assuming we hold everything we won this year.

To conclude, density isn’t the only predictor. It’s not like there aren’t local factor, even if “All politics is local” is something I wish we would forget on the grounds it’s almost entirely wrong. It’s not like there isn’t the advantage of incumbency, and it’s not like there aren’t other demographics. We do need to follow the notion of the 50-State Strategy, and try to compete everywhere, because you never know where you get a surprise win or help the rest of the ticket. Still, population density does suggest where some low hanging fruit should be. You can’t generally eat well by passing up the low hanging fruit.