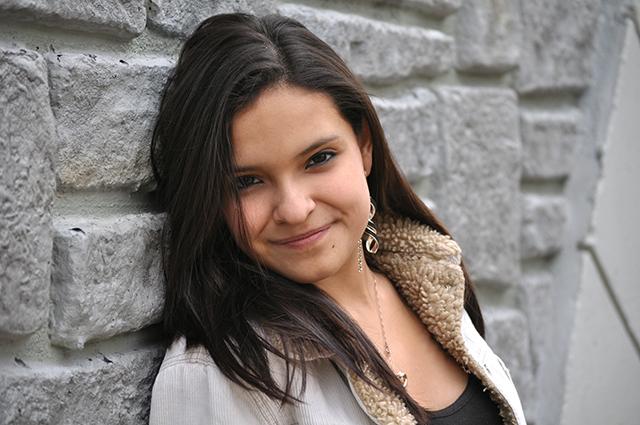 Thalia Estrada is 17, a senior at Central High School in St. Paul with a 3.5 GPA and the dream of becoming a neurologist. (Photo by Roberto Palma)

You likely don’t know Thalia Estrada or Karen Salas Ramirez, but they’re the kind of young students who can strengthen Minnesota’s economic future.

[EDITOR’S NOTE: The Minnesota Senate passed the bill discussed in this article today, May 1.]

Estrada is 17, a senior at Central High School in St. Paul with a 3.5 GPA and the dream of becoming a neurologist. And having testified before the Minnesota Legislature three times already, she has the sophistication of a 25-year-old.

Ramirez, 20, lives on hope and hard work, and that’s the message she’ll bring to her fellow classmates at Riverland Community College in Austin, Minn., in her graduation address this spring from the two-year school, trusting that, somehow, she can find the money to finish a four-year degree.

“My dad has always said, ‘Education is basically the way to be successful,’’’ Ramirez told me, the very philosophy my father instilled in me.

Yet unlike me and other native borns, Estrada’s and Ramirez’s futures and that of many other capable but undocumented students across the state lie in part in the hands of Minnesota legislators.

Both young women are so-called DREAMers, undocumented immigrants who have received from the federal government temporary deportation relief and work authorization and the chance to stay in the United States legally for at least two years. Still, under current Minnesota law, they don’t have the same rights as students with citizenship.

A bill scheduled to go to the state Senate floor May 1 would change that. The measure would allow undocumented immigrant students who meet certain qualifications to pay resident tuition at public post-secondary institutions around the state and to apply for state financial-aid grants.

Sen. Sandy Pappas, DFL-St. Paul, author of the Senate bill and squarely behind the issue for a decade, is optimistic the measure will pass the Senate this session. “Most Democrats are pretty solid behind it, and we’re going to pick up a number of Republicans,’’ she said.

Similar measures are being adopted by states around the country.

First called the Minnesota Dream Act and now the Minnesota Prosperity Act, the bill is currently out of play in the House, not having passed out of committee.

But House supporters hope the provision will be resurrected in a House-Senate conference committee. “I’m actually very hopeful,’’ says Rep. Carlos Mariani, DFL-St. Paul, author of the House bill. If adopted, Gov. Mark Dayton is expected to sign the legislation.

Supporters outside the Legislature span a spectrum from Education Minnesota to the Citizens League, from the Minnesota Chamber of Commerce to the Minnesota Private College Council, as well as immigrant groups, including the Immigrant Law Center of Minnesota.

In a recent letter to legislators, they argued, “We cannot afford to lose the opportunity to tap into talent already in our state,’’ and said that state action is necessary to open educational access to immigrants.

“Our economy depends on it,’’ testified Sean Kershaw, executive director of the Citizens League, referring to the state’s increasing need for educated young workers. Two-thirds of jobs in 2018 will require some form of higher education and data from the Minnesota Chamber of Commerce shows 43 percent of employers already struggle to find educationally qualified employees, he said.

Advocates also point to historically lower college-going rates for students of color, particularly immigrant or undocumented students, because they are not legally in the United States and feel they have no future here.

‘Right thing to do’

Besides being “the right thing to do,’’ argues Paul Cerkvenik, president of the Minnesota Private College Council, “there’s no reason they shouldn’t received need-based financial aid. They’re here through no wrong-doing of their own. We should help them achieve their highest aspirations, just the way we do other students,” Cerkvenik said.

“It makes economic sense for Minnesota” to have well-educated citizens, he said.

Opponents of the proposal have argued that it is unfair to allow persons who do not have the legal right to be in the United States to receive the benefits legal citizens qualify for. They also worry about a cost burden for taxpayers.

Mariani counters that only a few hundred undocumented students across the state would qualify for financial aid and that the state grant program could accommodate them.

If the measure does not become law, Estrada, who has been accepted at the University of Minnesota, Morris, where she plans to major in biology, cannot apply for financial aid through the state grant program. She has applied for 13 private scholarships equaling $33,000, but is awaiting decisions. The $12,000-a-year tuition would be “really hard for my parents,’’ she says.

In the meantime, Estrada, who has testified at the Legislature in support of the tuition and financial-aid proposal, is looking to the future. She has an apartment and a part-time job lined up in Morris.

A scholarship from Hormel “paid basically for everything” at Riverland, Ramirez says, but the scholarship ends with her graduation from the two-year program.

The University of Minnesota has accepted Ramirez as a student come fall, if she can scrape together tuition, she told me during an afternoon break from her job as a drug store cashier. She hopes to major in marketing and international relations.