Back in the day — 1933, to be precise — a streetcar line made its last stop on my North Minneapolis street, according to this illustration by Brett McKean. At the peak of the Twin Cities’ streetcar system in the early ’30s, there were some 530 miles of service and 1021 cars (by that time, a 20-year experiment with “streetcar boats” on Lake Minnetonka had fizzled). But by 1951 the number of cars was down to 758 and, just three years later, zero, according to this glowing article from the July 1954 issue of Mass Transportation Magazine. 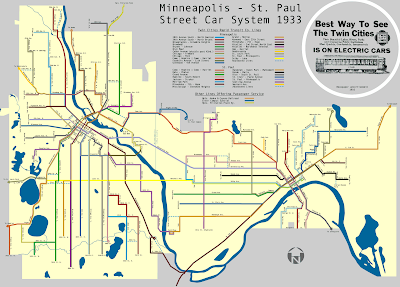