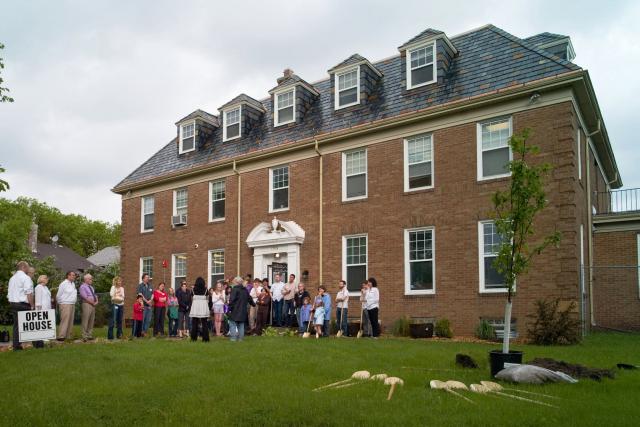 The Avenues for Homeless Youth house provides one path out of homelessness for young people. (Courtesy of Avenues for Youth)

There’s real need. Now there’s a new outreach effort to house homeless youth, an offshoot of a program that’s been around a dozen years or so.

Listen to the testimonial of John Larsen, who with his partner Mike Stewart opened their Minneapolis home to a 19-year-old, homeless woman whose life was in a downward spiral:

“We provided a roof over her head and food. With that she finished high school, went on to college, [made] the dean’s list, is applying to graduate school. She’s a remarkable young woman.’’

What changed this young woman’s life was a safe, dependable place to live and caring adults, the mission of a series of so-called host-home programs that match up adults willing to put out the welcome mat and homeless youths age 16 to 21. Beginning this month, they’re expanding and looking for more persons with generous hearts.

First there was the GLBT Host Home program founded in 1998, in which Larsen, 43, participated; then the Suburban Host Program for Hennepin County suburban youth launched last summer, and now the Minneapolis Host Home Program. So far, 20 matches have been made.

The program is “cost effective and makes a significant difference,’’ says Cathy ten Broeke, who heads up the Office To End Homelessness in Minneapolis and Hennepin County.

Keep in mind that it’s community-based and voluntary, not a government-sponsored foster care program, she says. Supporters include the Downtown Congregations to End Homelessness and the Minneapolis Downtown Improvement District.

A look at the numbers

One is too many, but the last time – in fall 2009 — that advocates for the homeless banded together to canvas the state’s emergency shelters, drop-in-centers, transitional housing and even the streets, they counted 1,268 youth unaccompanied by an adult and living alone or bouncing from one short-stay place to another.

That’s 1,268 young Minnesotans age 21 and younger fending for themselves, sleeping in emergency shelters, in cars, on friends’ couches or otherwise being temporarily housed, according to Wilder Research. (That’s also an increase of 46 percent compared to the 2006 count.)

But experts believe that official number is low; they estimate the more realistic number is 2,500. Another count will be conducted around the state Oct. 25.

But the need is greater than their efforts, which is why Avenues, where Loon is executive director, is acting as program manager of the host home programs. Further, the model is catching the attention of officials in Ramsey County and other areas of the state.

Think of it as a sort of exchange student program, Loon suggests, with supportive adults providing food and board for eight or nine months while young adults get their lives together. She hopes by this time next year to have another 10 to 15 matches.

To Shannon Nealy, who herself was homeless intermittently from age 15 until she became an adult and now works with homeless students at Minneapolis Community and Technical College, the program is a wonder.

When you don’t know where you’re going to sleep or whether you’ll have food to eat, you can’t worry about school, she says.

“I know what [homelessness] does and the long-reaching effects it can have in life,” says Nealy, who sits on the Leadership Council of the Minneapolis Host Home Program.

What’s appealing about this program, Nealy says, is that’s it’s voluntary for both young adults and homeowners. A lot of young adults are wary, but in the home host program, she says, young people are “not just put somewhere. They’re very active in choosing’’ their homes and they know that hosts – who are not paid — are doing it voluntarily rather than as a source of income.

Were there struggles for Larsen and Stewart?

Larsen laughs. “Yes, definitely,” he says. “The first few months were challenging, both for us and for her. It was a remarkable gift she gave us in her trust, that she would say, ‘OK, I need your help’’’ when she’d been told so long that she had to stand on her own.

As accustomed as she was to a schedule of sleeping in different places each night, “It took months for her to be able to be with us in our home each night,’’ Larsen says. Now, 22, she’s moved into stable housing elsewhere but drops by every couple of weeks for a movie or dinner or just to talk.

“We became her gay dads, as I think she calls us,’’ he says.

“All it meant was having a home and some food,” he says. “It’s a remarkable thing. It’s one of those simple ideas that could have a great impact on our community.’’

Information sessions, spelling out the details as well as supportive services available for the young adults and the people who will share their homes, are being held this month beginning Sept. 11 and are listed here.