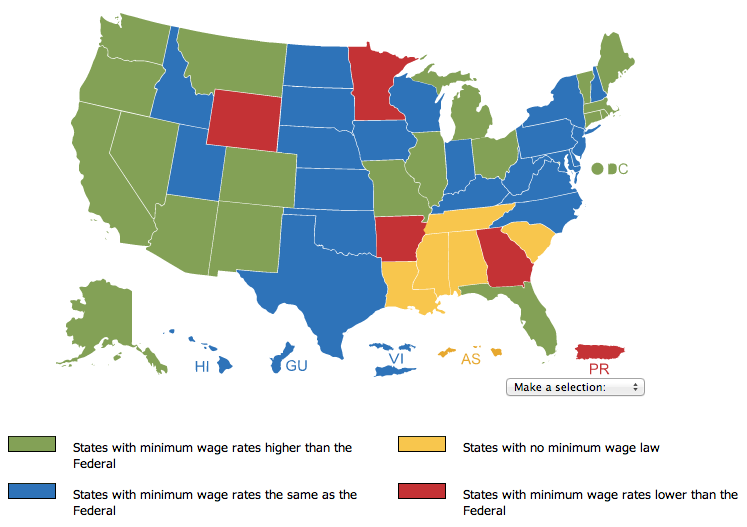 Click to view interactive map of minimum wage rates in the United States. Minnesota is one of four states (and the territory of Puerto Rico) with a minimum wage below the federal wage, although most minimum-wage workers in Minnesota get paid the federal rate of $7.25.

As a native who has long believed this state one of the most progressive in the nation, I’m surprised at this: 19 states have minimum wages higher than the federal minimum wage – and Minnesota is not among them.

Minnesota hasn’t raised the rate since 2005, and the buying power of the amount most minimum-wage workers in Minnesota get paid – the federal rate of $7.25 an hour — doesn’t go far these days.

As Kris Jacobs, executive director of the JOBS NOW Coalition, says so often it’s almost her trademark: “What part of ‘not enough money’ don’t you understand?’’

I got her point after interviewing her the other day when I paid for the daily lunch special (half a turkey sandwich with avocado and bacon on multi-grain with a cup of white bean soup) at a restaurant near her St. Paul office.

My takeout lunch cost me more than 93,000 Minnesotans earn for an hour’s work, according to a study released in August by the state Department of Labor and Industry.

With DFLers in control of the Legislature, what Minnesotans earn for their daily work is a topic sure to be addressed. In fact, the House has formed a first-of-its-kind House Select Committee on Living Wage Jobs to research and report on a big question: Can state policies expand economic growth by raising wages?

With a DFL governor predisposed to the idea in the past, as well as key non-profit organizations and coalitions calling for the first increase in eight years, a wage hike seems likely.

Minnesota House Speaker Paul Thissen, DFL-Minneapolis, has said: “We want to make sure the jobs people have are paying them a wage you can live on.’’

What of dissenters? They’re out there, of course.

The Minnesota Chamber of Commerce opposes any increase, arguing in part it’s not heads of households but teenagers and second-job holders getting minimum wage.

Their labor policy manager Ben Gerber also refers questioners to this 2008 video clip of Milton Friedman on the minimum wage:

“We like to keep the minimum wage in synch with the federal,’’ says Mike Hickey, director of the National Federation of Independent Business, Minnesota chapter, arguing proposed increases would endanger the health of businesses near the state’s borders.

A couple of bills calling for an increase already have been introduced at the Legislature. At a meeting last month, non-profits rallied behind a request for $9.50 an hour and they say they have sponsors for such a bill. A spokesman for the AFL-CIO says they’ll push for “higher than $9.’’

A bill brought in the House suggests $9.38. In contrast, the state Senate bill introduced last week would lift that typically-paid minimum wage of $7.25 by 25 cents an hour to $7.50.

Author of that bill, Sen. Chris Eaton, DFL-Brooklyn Center, wants to raise the state minimum wage to $7.50 an hour for larger employers, which plays out to “basically” a quarter, she says, because most hourly- wage Minnesota workers are receiving the federal minimum, due to the overriding federal wage requirement. 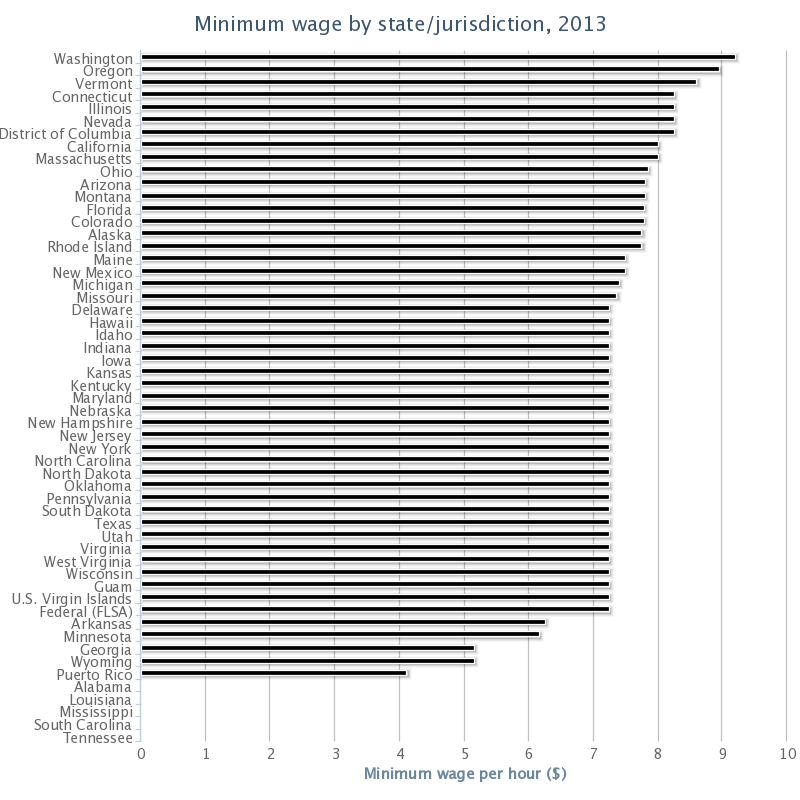 The state can’t accurately determine the number of Minnesotans working below the federal wage, but the number is considered small.

The increase would give low-income earners more money for groceries and put Minnesota in the middle of state wage rates, Eaton says.

Eaton’s bill would also tie the increase to the inflation index, as some states do and the federal government used to do. That’s an idea Hickey on the business side calls “putting on auto pilot” and “dangerous.’’

Advocates for the poor don’t like the Eaton bill either. “I find that to be a miserable proposal,’’ says Brian Rusche about the possibility of a $7.50 an hour rate.

Rusche, who heads the Joint Religious Legislative Coalition, explains how Children’s Defense Fund Minnesota, JOBS NOW, Child Care Works and the broad-ranging A Minnesota Without Poverty organization, advocate for a $9.50 an hour wage under their Family Economic Security Act proposal. That proposal carries out recommendations of the Legislative Commission to End Poverty in Minnesota by 2020.

That $9.50 is “…a very reasonable rate, given historical negligence on minimum wage and what families really need if they’re working full time year round,’’ Rusche says.

Legislator Eaton argues that a larger raise would be “an awful lot to eat all at once” for businesses, but “if there was a prayer of passing” something in the $9 range she’d “be there.’’

JOBS NOW advocates believe $10.58 an hour is a better wage rate but stand with the request for $9.50 About half a million jobs across the state pay less than $10 an hour, which is not a livable wage for families, Jacobs argues.

She and her staff point out that if the federal minimum wage had kept pace with inflation over the last 40 years it would be about $10.58 an hour, according to the Raise the Minimum Wage site sponsored by the National Employment Law Project. 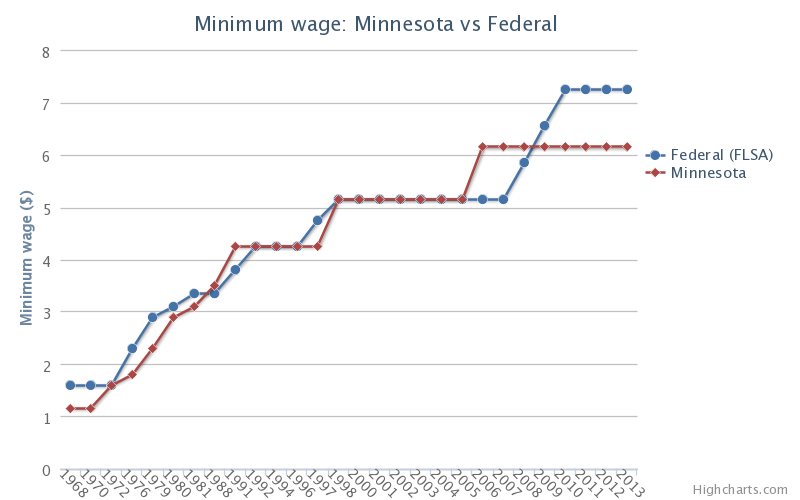 JOBS NOW staff say public attitudes support an increase. They cite a Minnesota State Survey in late 2008 that found almost 70 percent of all Minnesotans considered the current state minimum wage as too low and 77 percent of them favored indexing the wage level to the rate of inflation.

The idea is to look at Minnesota’s economy and why we are producing so many low-wage jobs, Winkler says, and to answer the question: “Can the state of Minnesota pursue polices to help raise wages and thus expand economic growth, create more demand in the economy, get more people to the point where they can support themselves and their families when they are working full time.’’

The bi-partisan committee will issue periodic reports this session, then spend the summer traveling around the state listening to all sides of the discussion. A final report and recommendations are due in 2014.

Postscript: There have been rumblings that Congress consider raising the federal minimum wage to $10 an hour.