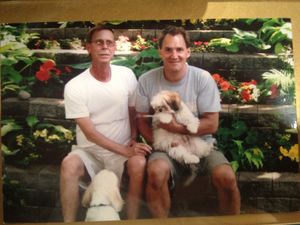 Among the benefits of the freedom to marry, the ability to see a loved one though sickness and health, until death do you part–as wedding vows put it–is one of the more emotionally difficult and expensive propositions facing gay men and lesbians seeking to marry the people they love.

Jim Lilya, a 50-year-old Detroit Lakes area man, and his partner John Rusch spent a small fortune in legal fees to secure their rights in the nearly 25-year-long  relationship they shared. Rusch passed away nearly two years ago.

Rusch’s memory stays strong for Lilya, as does his passion for making sure that other loving couples will be able to enjoy the simple equal protection that he and John were never quite able to obtain.

“We always wanted to be married,”  Lilya said in an email to Bluestem. “We thought of ourselves as married, we lived together as a married couple. We had our family with two dogs, our house that we fixed up for most of those years, our yard and gardens that we tended together.

Lilya regrets that he and Rusch were never able to marry. “We were a couple but in reality we weren’t married,” he recalls. “We never had a ceremony inviting all of our friends and relatives to share in our love and our commitment to one another. We never were able to stand up and say ‘I take this man, to have and to hold, to love and to honor, to cherish. . .Til death do us part.’

When Rusch died, Lilya was devastated emotionally, but was able to retain the home the couple made together.  “I’m glad we had the forethought to have wills because I don’t believe I would have been able to keep all that we had together,” Lilya said.  “I was on great terms with his family… but when it came down to it, I think they would have taken his half. I would have had to sell my home.  Give them a vehicle. Probably half the money in our accounts.”

While Lilya and Rusch were able to able to afford to hire a lawyer to write their wills, he worries about that many same-sex couples can’t afford the expensive process of creating wills that won’t be easily disregarded or challenged.

“The cost of the wills was a financial burden on us,” he said.  “I can’t imagine what same sex couple go through without wills, because they can’t afford them or don’t think to get them. Married [straight] couples don’t have these issues.”

“Even with the wills, I had to spend even more money that I didn’t have because there was some ambiguity about ownership,” he added.

For the widowed Lilya, the freedom to marry comes down to basic Minnesota Nice fair play.

Regardless of how his state representative Paul Marquart (DFL-Dilworth) votes in this afternoon’s consideration of HF 1054 by the House Ways and Means Committee or when the bill is brought to the floor, Lilya’s experience as a widowed gay man in Minnesota has created the political will to keep up the fight for freedom and equality.

“We are not second class, and we won’t be treated as such,” he wrote.  “We now know our value and we are not going to stop until we have equal rights and treatment.”

Note: The Minnesota House Ways and Means Committee will take up the bill in the afternoon after the committee reconvenes following the day’s noon floor session. Readers can watch the committee hearing at this link at The Uptake, time TBA, and learn more about the process in  MN House Ways & Means Committee to hear HF1054, marriage equality bill, Monday, May 6.

Photo: The late John Rusch (left) and his surviving “life partner” Jim Lilya (right), along with their beloved dogs, Rufus and Rocko (above); it’s Day 14 of the Countdown to Pass The Freedom to Marry.

This original story is underwritten by a sponsorship by Minnesotans United for All Families to Bluestem Prairie.