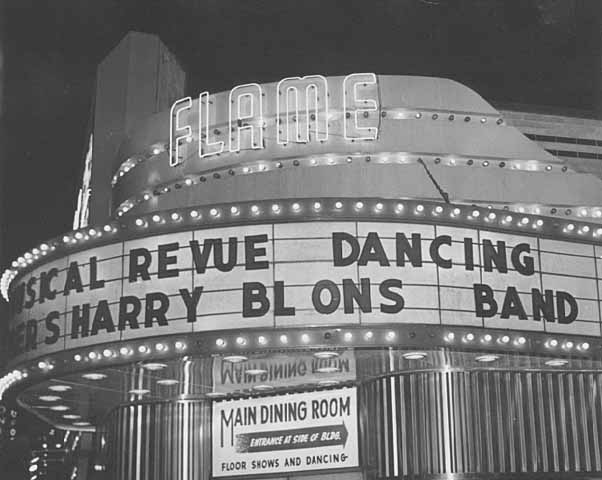 In 1979 we saw, near the southwest corner of Whittier, an excellent pre-internet publicity stunt: on the exterior wall of the Yukon Club, then a 3.2 joint at Grand and Lake, a frame in which posters for events at the bar should have appeared. Within the frame, handwritten, it said: “Live. The Pistons. But not here.”

Note: Guest Contributor to this installment of Memoir’s of an 80s Slacker is noted Minneapolitan Johnny Hazard. -Michael Stoesz

The north end of Whittier, on the other hand, along Nicollet, was an extension of the honky-tonk strip between 13th Street and Franklin (and west to Loring Park) until urban renewal in the mid-to late-seventies extended the Nicollet Mall, brought us the Hyatt Regency Hotel, and converted the emblematic Flame Bar (country western in the front room, soul in the back) into something called Great Tapes, blaspheming those beer-soaked floors with wall-to-wall carpeting. I started going to the Flame in 1974 and usually stood near the back door, in the hallway between the two rooms so no one would ask how old I was (fifteen) and charge me cover. I exposed myself to both musical styles and my tastes still veer in a mix of both: they call it rock and roll. The country group played behind the bar, way up high. I can’t remember the leader’s name; he looked like Hank Williams. The soul groups included Haze, Sweet Taste of Sin, and Philadelphia Story. Forgotten was that fact that the Flame was the former headquarters of the notorious Minneapolis gangster Kid Cann.

The last time I remember entering the Flame was in the spring of 1978. I wasn’t underage any more. I was walking by with Elisa, just in from an eastern seaboard suburb with a pit stop at Coe College in Iowa. She was flattered that a man in a wide-brimmed yellow hat (not Curious George’s friend) was beckoning to her: “Wow. Do you think he wants to be my pimp?” Imagine.

I remember admiring, still when I was 15, the “older” hippie women heading for shows like Bonnie Raitt at the Marigold Ballroom. I never got inside before it was torn down to build the Hyatt Regency. I suppose something similar has been destroyed in every city, as the song “Gone Dancing” by the Kinks attests: “The day they torn down the Palais/my sister just stood and cried./ The day they tore down the Palais/part of my childhood died.”

It wasn’t until 1982 that I came to live in Whittier, after having spent most of my life nearby. Like at the Flame, in Whittier we lived a tale of two (or more) musical scenes. “Funkytown”, one of the first major black Minneapolis hits, was recorded at Sound 80 at 26th and Nicollet. Just after “Funkytown”, Sound 80 moved out and Twin Tone Records moved in. Twin Tone recorded most of the first local punk and other original rock groups.

“Back there,” he responded with perfect popcorn-impaired pronunciation. She went back and found them: “Who’s the asshole in front?”

As the Loring neighborhood in the seventies (before its premature gentrification) was one of the most mixed parts of the city—blacks, Indians, gays, hippies, prostitutes, and a few regular downtown workers—Whittier was in the eighties. The “Eat Street” hype was years away: the only “ethnic” restaurant in the area was the Black Forest, known for a high percentage of painters and other artists among the wait staff and the drinkers. The Rainbow Chinese Restaurant came next and the rest is history. Liquor control laws still led to the proliferation of 3.2 beer establishments and Whittier had at least three: The Yukon, Joe’s on 26th Street and 1st Ave. South, and Joe Houle’s on 27th and Nicollet. My neighbor Bud the country singer was a regular at Joe’s and we had a couple of low-quality jam sessions there. After 1980, Joe’s was a hangout of the Marielitos: Cubans who had entered the U.S. as a result of a deal between Jimmy Carter and Fidel Castro. After a couple of years all but Reynaldo, a friendly older man who looked like and wore a hat like that of Lyndon Johnson or Eliades Ochoa, had been detained on weapons charges and may still be at one of those army concentration camps in Wisconsin.

But the true mecca of music in Whittier was the Artists’ Quarter in its original location, almost kitty-corner from Joe’s. Here, if you wanted to get some, you were supposed to sit at the oval bar or remain standing, as there was signs that warned “No joining at tables without invitation”. The musical programming was blues, rock, and jazz till about 1983 when the bar went to all jazz and established a cover charge. Because my girlfriend, Kit, worked there, I had sort of a lifetime membership and didn’t pay cover. The energy and diversity of the crowd was reduced a bit as people couldn’t walk in off the street after nine as easily as before. I remember one night when Donnie, a local hustler, was explaining to a young art student that he was from New York.

“Nah. We ain’t all underprivileged, you know. I’m from Long Island.”

My employer at Bicycle Express assumed that I was one of Bill W.’s people because I cashed my checks at the AQ. I didn’t even drink much; it just seemed more interesting to do business there than at a bank.

Nicollet was the preferred street for bike riding between downtown and points south. The people I met or recognized on the street after constant round trips between home and downtown were mostly the same characters whom Kit told me about meeting at the bar. If they lived on Nicollet, I knew where; Minneapolis was a better loitering city then. I remember a voluptuous mixed woman named Angie. She hung out with a very skinny bikeless biker named Mo who wore a drooped-down blue cowboy hat. I never knew if Angie was a sex worker, and if she was that would have no stigma for me. But, she was always where they were. Of course, everyone on Nicollet was where the sex workers were, because…that’s where they were. Once I saw Angie outside of her building; someone had put all her stuff out in front, her mattress was burning, and she was yelling: “I’m Mo’s ho! Hey, everybody! I’m Mo’s ho!”

I haven’t said anything about Prince yet, have I? Wasn’t that the idea? To talk about the two Minneapolis music scenes? Okay. Wait.

Whittier was, by Minneapolis pre-gang era standards, a high-crime area. There were lots of white diletante heroin users and lots of desperate, non-diletante heroin users. Crack came later. Some of them, needing a fix, lurked in doorways and robbed, for example, the wait staff of some of the bars and restaurants. Or they grabbed whoever else didn’t know to walk in the street and not on the sidewalk in those spots. There was also, more unfortunately, a lot of stranger rape. All this provoked some neighbors to lobby for the relocation of the precinct station to 24th and Nicollet. And the police loved to run their anti-prostitution decoy operations. These were a good show because the women they got to be decoys were somewhat less desperate, healthier and more sexily dressed than many of the real sex workers. There was one who wore a tight leopard print blouse. Men in cars were lining up in their cars to get with her (but really to go down like lemmings). Various unmarked squad cars were waiting in the parking lot of what is now what is now McDonald’s. Some neighbor women saw me, thought I was in line, too, and made gestures like “No! She’s a cop!”

There’s no need to say much about Prince except that in those days lots of people claimed to be his cousin, that lots of people claimed to have proof that he was bisexual, and that he helped to make Minneapolis a more interesting city and one where, despite generations of “nice” racism, young black musicians could work, even after disco had destroyed most opportunities for live musicians. In some circles his immense multi-instrumental and vocal talent has never been recognized because of a combination of rockers’ envy—in those early years Rolling Stones fans booed and threw projectiles when Prince opened for that group in Los Angeles– and homophobia (which can exist independently of whether the person targeted is gay). His success broke, briefly, the stupid northside-southside rivalries in Minneapolis. He’s the product of a bizarre situation in which a city full of black musical talent had and has no high-watt black-oriented radio station: James Brown, Smokey Robinson, the Jackson 5, Joni Mitchell, Santana, Sly Stone, Bob Dylan: it all went into his mix. Prince and his crowd, in spite of whatever eccentricities or ostentation they may have engaged in, never blew the community off: we saw them at First Avenue; we saw them at the crazy White Castle on Lake and Blaisdell. Prince and Jimmy Jam Harris are sons of respected local jazz and blues musicians and, inspired by these offspring, teenagers in Whittier and other neighborhoods got their instruments out of the pawnshop and saw that they had a chance of success.

And finally, before there was Eat Street, did we eat? Of course we did. Many of those bars with restaurants that opened in the Loring district, those places that emerged over the ruins of the honky-tonk Whittier neighborhood like Mexican cathedrals constructed over the ruins of indigenous temples, had happy hour with free food. Liquor Lyle’s baby. We bought one beer or, if we were poorer or cheaper still, kept moving so the waiters wouldn’t try to take our order, always stuffing Ritz crackers topped with cheddar and steam table chicken wings and meatballs in our mouths. Slinging free food is an old time bar trick to sell more booze and back in Whittier in the 80s my slacker pals and I were happy to oblige.