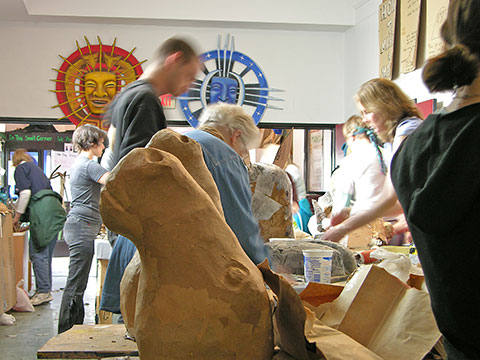 During the announcement time (near the last 15 minutes of each Workshop), each section indicates their “wishes”. The desire for additional people — this may mean you, is at the top of everybody’s list.

The parade may use people who have as little talent as being able to push the floats. For the stronger personages, there are tasks to tote a puppet or puppet-appendage control rod. If you do join in the parade, they may festooned you with a section theme embellishment.

Some of the bands that march in the parade are decked with items such as beaver hats, not hats of beaver pelts but hats that impart beaver characteristics to the musicians. A fantastic part of the MayDay Parade is the Bands that entertain. There is music all along the Parade route, during the Ceremony, and throughout the Park as the Festival continues till dusk.

Another great aspect of MayDay is hanging at the Theatre and assembling costumes, and being part of the crazy creation. If you are not parading you can still help build costumes and masks for others. The really manic MayDay celebrants will not only be in the parade, but will also participate in the Ceremony, which happens after the parade has entered Powderhorn Park. For that you are asked to commit to attending the Saturday rehearsal the day before MayDay, this year May 5. I observed the 2010 table spread with food; they feed the actors well. The rehearsal is usually held at the Ceremony site in the park, but as with last year, 2011, due to rain, the pageant practiced in the park’s gymnasium. Your talent is adequate and appreciated, and you may be adopting a whole other identity separate from the parade, and you everyday life. above: Seed Ark Bearers (from 2009) .  below: The Seed Arks are presently inside In the Heart of the Beast Theatre for some refurbishing; There are openings for Captains and crews. An estimated 50 persons would provide power,  relief, and support.

“Big Ones” (Strong Adult Puppeteers); below: MayDay 2010 Ceremony Practice of some of the Big Ones Mother Earth is a Big One this year Earth’s Heart is being worked on in the foreground and during Practice the day before the Ceremony (2011) Come to a free and open workshop to discover your place in a new world of transition. Tuesday and Thursday evenings from 7–9 p.m., Saturdays 9–11 a.m., and 1–3 p.m. details at In the Heart of the Beast Puppet and Mask Theatre (hobt.org)

You may help make Dragon Flares; You may assemble a deer head; You may help papier-mâché in the clay room; You may paint a fish head; With you, it is our story, our transition, our addition to a joy filled world.