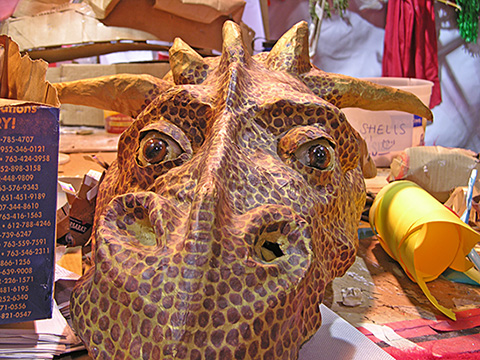 It is getting near show time for the 2012 MayDay Parade and Ceremony. The activity level at In the Heart of the Beast Puppet and Mask Theatre is charged with vibrancy. The deadline of the May 6th  MayDay has every parade section buzzing in many directions. You may be overwhelmed with the busyness at first, but you will be comfortably enveloped in the joyfulness and energy. You will find a task, or two, that will aid in the creation of this extraordinary community event.

The 2012 MayDay Parade Theme has been uploaded to the HOBT.org website, so you can get a preview of the MayDay Parade and Ceremony as documented in the Program and displayed on the streets. It helps explain some of what is taking place at the theatre’s workshops. Then there is the artistic expression that may be a little less easy to explain, but no less delightful.

Do you feel lacking in the ability to join in the artistic flare? Do not be silly, but you can still contribute to bringing MayDay to our community. There are plenty of volunteer opportunities. Information is at the HOBT site.

And you are always welcome to simply wish everyone you see a “Happy MayDay”.