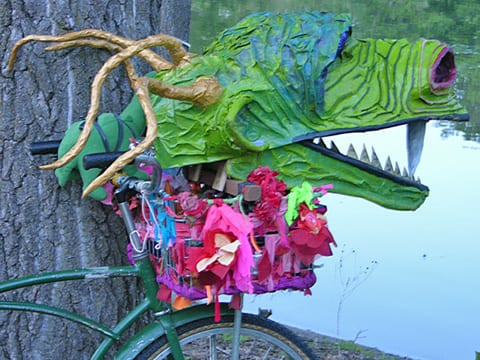 MayDay Parade, Ceremony, and Festival was postponed one week due to weather, but the celebration was as festive as possible on the Second Sunday in May. As delightful as MayDay is for someone like me to photograph, there is the whole dimension of sound I can not capture, specifically the musicians that participate with their audio talent. MayDay really should be experienced!

One of best aspects is that you are invited to join in, sure it is a loosely controlled show, a pageant of volunteers, and enthusiastic spectators, but We All Make MayDay, We All Are MayDay. Hear and feel the collective drumming. The Arborators, from the Midway-Frogtown area of St Paul, once again rocked down Bloomington Avenue at MayDay. Just one of many bands of musicians to entertain during the day. I suspect that dad was the most enthusiastic, but the little buddy was cooperative. Oh Boy! a parade, is hard to contain Although the MayDay has a theme around which the Parade and Ceremony is formed, at the end of the Parade is an entier Free Speach section, where any group with any message delivered peacefully is welcome to join.

At Powderhorn Park, the music continuted and expressions of every kind continued on a shared journy. Without hurrying, I hope to add more images showcasing some of the Blooming Town section of MayDay that was part of the Transition Town theme of the 2012 MayDay. A idea of working to end the world as we know it now, beginning to build a better world as we live it.