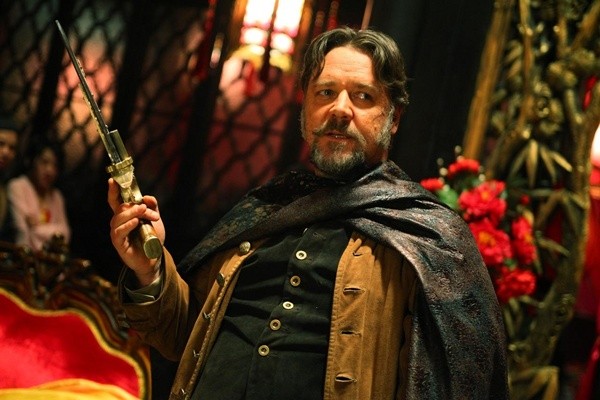 Within the first two minutes of RZA’s directorial debut, The Man with the Iron Fists, we see a man’s arms get pulled out of his sockets in a Kung Fu dinner brawl. And so the dominant tone of gory, zany unexpectedness that’s embedded in RZA’s flick is sprung upon us rather quickly. By the time the end credits invade the screen, we’ll have seen enough dismembered and punctured body parts to fill an episode of The Walking Dead. Yes, The Man with the Iron Fists likes extra servings of blood with its screen time, but there’s also some fun and laughs to be found amidst the guts strewn about the floor. Just watch where you step.

It is the nineteenth-century, and in the China town of Jungle Village, the Blacksmith (RZA) comes into contact with those who wish to hurt others and need the proper weaponry to do so. Lately there has been a lot of these people coming into town, and it turns out they’re not all coming to catch the scenery. The government is shipping a large fortune of gold to their neighbors to the north: a peace offering to end all wars between them. To get to its destination, though, the gold has to go through Jungle Village, and that won’t be an easy task considering seven clans are elbowing each other in the ribs to get their paws on the gold first. And some of those elbows have blades attached to them.

Many men come knocking on the Blacksmith’s door, requesting customized weapons with plenty of sharp points on them. Some pay and others threaten. Either way, Blacksmith doesn’t get much sleep with all of the business pouring in. The money he does receive gets tucked away with a stash he’s been saving up for years in hopes of making enough dime to one day free his girlfriend Lady Silk (Jamie Chung) from servicing men in Madam Blossom’s (Lucy Liu) Pink Blossom brothel.

The most powerful of the seven clans clawing for the gold is the Lion Clan. Following the suspicious death of the clan’s leader, Silver Lion (Byron Mann) has taken leadership of the group, aided by his loyal friends Bronze Lion (Cung Le) and Poison Dagger (Daniel Wu) (aren’t these names fun?). Coming soon to crash the cat party is Zen Yi (Rick Yune): the son of the late Lion Clan leader who knows his dad’s death was foul play with a side of poison.

Not wanting to be left out of the bloodbath Jungle City is destined to become, Brass Body (Dave Bautista), a hulking man who can turn his body into metal just by thinking it, comes through the town gates looking to make some money and bash some skulls. And finally there’s Jack Knife (Russell Crowe), a rogue British soldier who wields a knife-gun, promptly reserves a room in the Pink Blossom with three women, and looks down at the stone streets from his window as he waits for the action to start.

RZA, who co-wrote the screenplay with modern horror guru Eli Roth, provides the story with a crowd of rowdy characters and enough situations and sub-plots to populate a dozen separate movies. On one hand, putting so many story elements into one movie makes the world of The Man with the Iron Fists an always-exciting place to spend your time in. You grow to appreciate the meticulous details RZA incorporates into every scene, such as the weaponry. There’s a gun attached to a woman’s thigh that can be shot when another person rotates the woman like a swing dancer juggling their partner. Lion Clan members have claw blades that wrap over knuckles and rip out jugular cords. Madam Blossom cools herself with a hand fan that has blades shooting up from the folds of the fabric. You don’t see this kind of prop innovation anywhere else! And with so many characters involved in the plot, there’s almost always somebody onscreen trying to kill somebody else for some reason. The constant hatred and ill intentions of the characters makes for a tense atmosphere where swords could flash out of holsters and find homes in flesh at any second.

The down side to all of this rambunctious energy is that the story is cluttered at times. RZA isn’t able to keep the camera too long on any one person because there’s always someone else we need to go back to so they don’t fade from the plot. And the people focused on the most are the least interesting of the bunch. I wanted to see less of the Blacksmith and more Madam Blossom, more Silver Lion and less Zen Yi. On the plus side, as more characters die the further the movie goes, the number of people RZA has at his disposal dwindles to a manageable figure—but by the time this figure exists the movie’s almost over. Maybe RZA should have used four clans instead of seven. Then again, he’s stated in promotional interviews that the original cut of the movie was four hours long. It seems too many essential organs and blood may have been lost on the cutting room floor.

Performances range from mediocre to awesome. Crowe ranks as one of those who bolstered the film’s credibility and enjoyment factor. As Jack Knife, Crowe channels some mannerisms of his that haven’t been tapped in a while…maybe even ever. Addicted to sex, keen to tiny details, and knowledgeable in the ways of cooking, Knife overall is so lovable that I wish he had been the central character of this mini-epic. Liu, playing Madam Blossom, strongly heads the female cast with her ability to flawlessly change from charming host to venomous slaughterer. Byron Mann is perfectly cast as chief antagonist Silver Lion, a character you love to hate based on the people he kills and the way he snobbishly delivers lines in a self-assured tone.

The Man with the Iron Fists is flawed but fun. Its grindhouse-like cinematography by Chi Ying Chan, combined with RZA’s and Eli Roth’s bloated but stylish script, makes it clear that this is a love letter to the Kung Fu flicks of the 1970s (surely one reason Quentin Tarantino presents the movie). There are too many knives flying through the air and not enough gravity in the setting to ground RZA’s directorial debut in movie making heaven, but the rapper-turned-actor-turned-director/writer shows promise through his emphasis on detail and ability to create lurid situations.

The Man with the Iron Fists is rated R, has a runtime of 1 hour and 35 minutes, and was given a wide United States release on November 2, 2012.