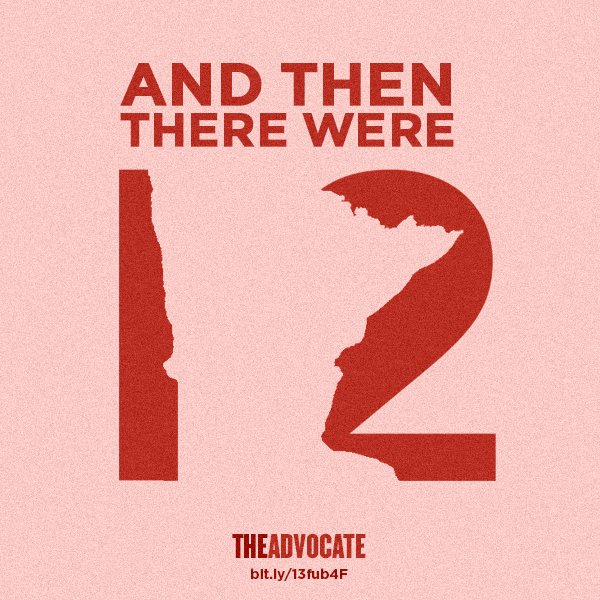 What a crazy day I had yesterday! I went to St. Paul, MN to watch history being made as Minnesota’s state senate voted to legalize gay marriage, an event that will happen today when Governor Mark Dayton signs it into law.

The Wabasha Bridge in St. Paul ready for history!

How wild! How crazy! As I listened to the senator’s speeches and the wild roaring love-chants floating throughout the capitol rotunda, it was almost impossible to take in. 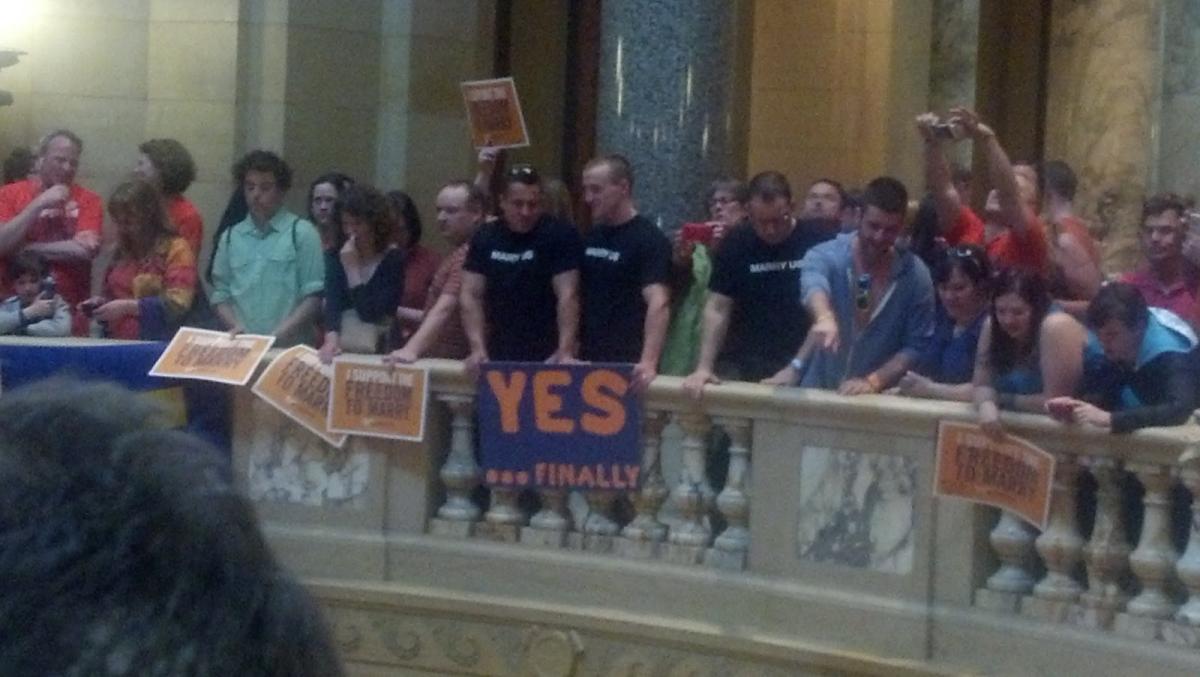 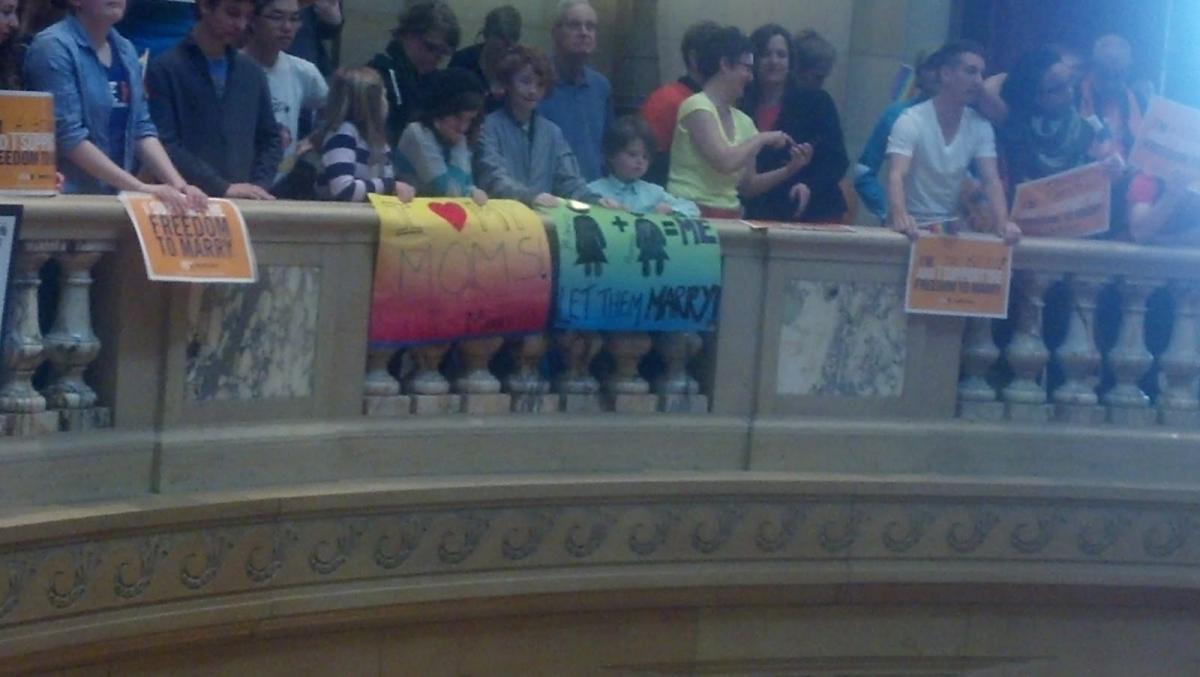 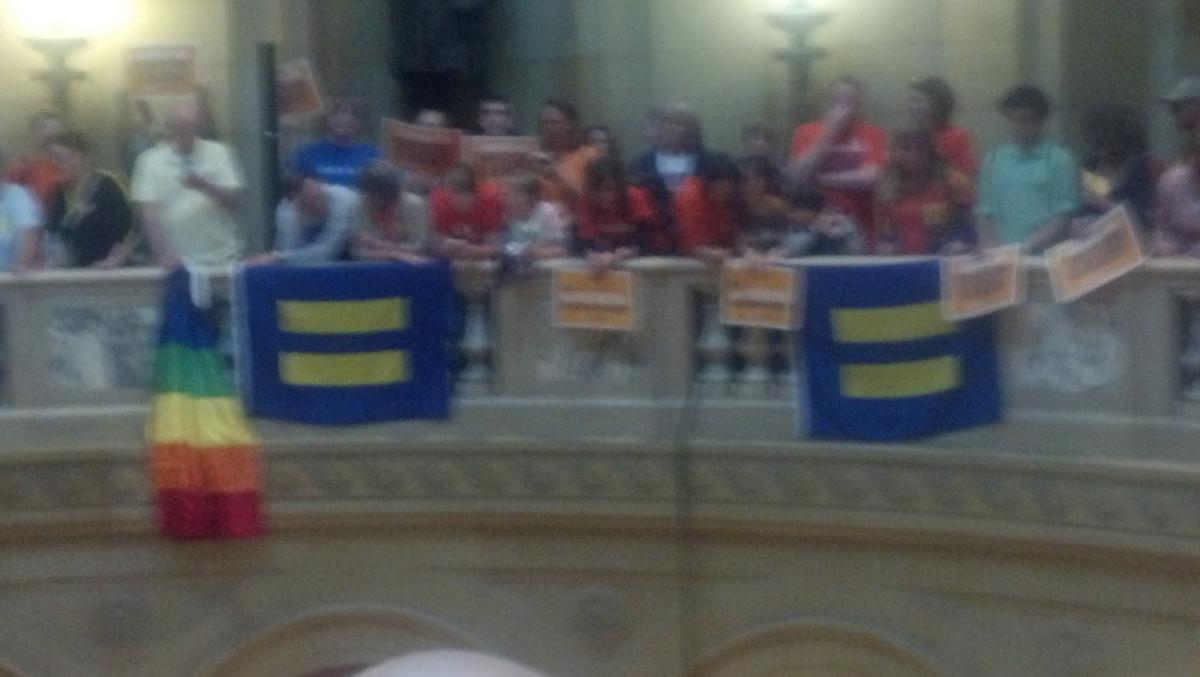 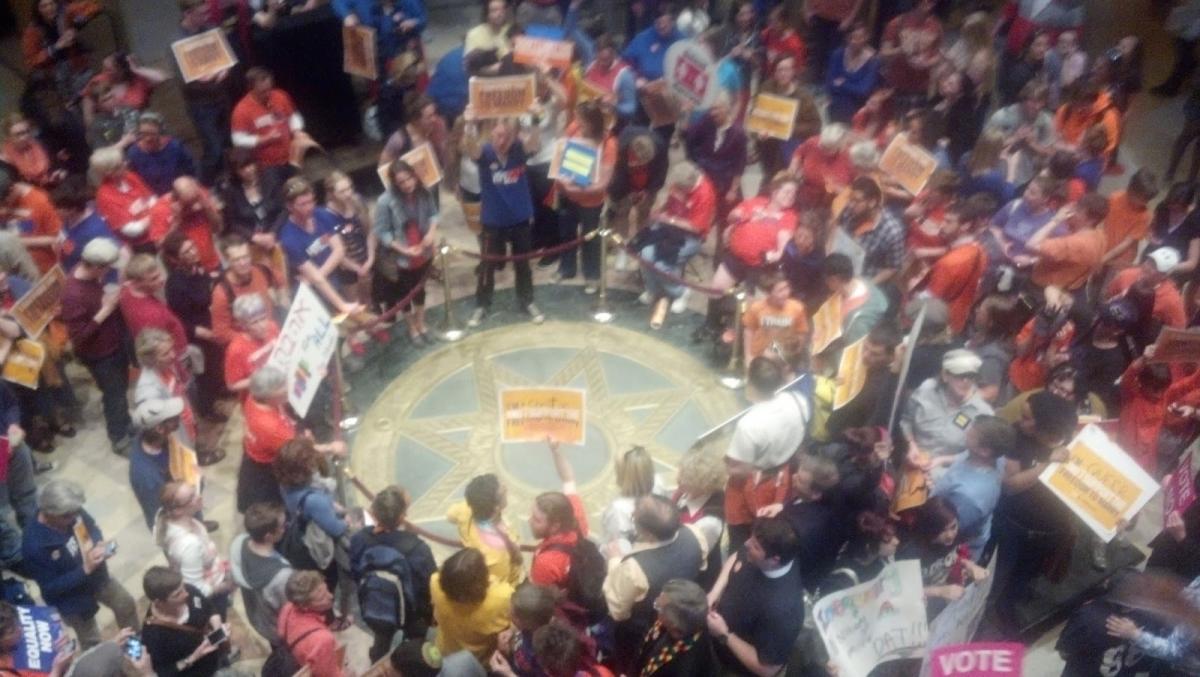 It seems I have been thinking about gay rights and marriage in ways I haven’t always fully understood. It started with my sister wondering out loud as a confused teen, “What is wrong with me?” to a young man named Bob Gardner who joined the first speech team I coached as a brand spanking new English and speech teacher. I immediately recognized him as gay and watched feeling helpless at times as he navigated a path that was fraught with insecurity and worry and torment. I shepherded him into my fold, wanting to protect and guide him if I could, but mostly I let him be the person he was meant to be. He would be the first to say that it wasn’t always easy.

And I can’t think of time where I ever let religion cloud what I thought of it. I was raised Methodist and so I know as many stories as the next Sunday-schooled child, but I can’t remember ever letting those stories from long ago ever affect the reality of what is clearly in front of me. 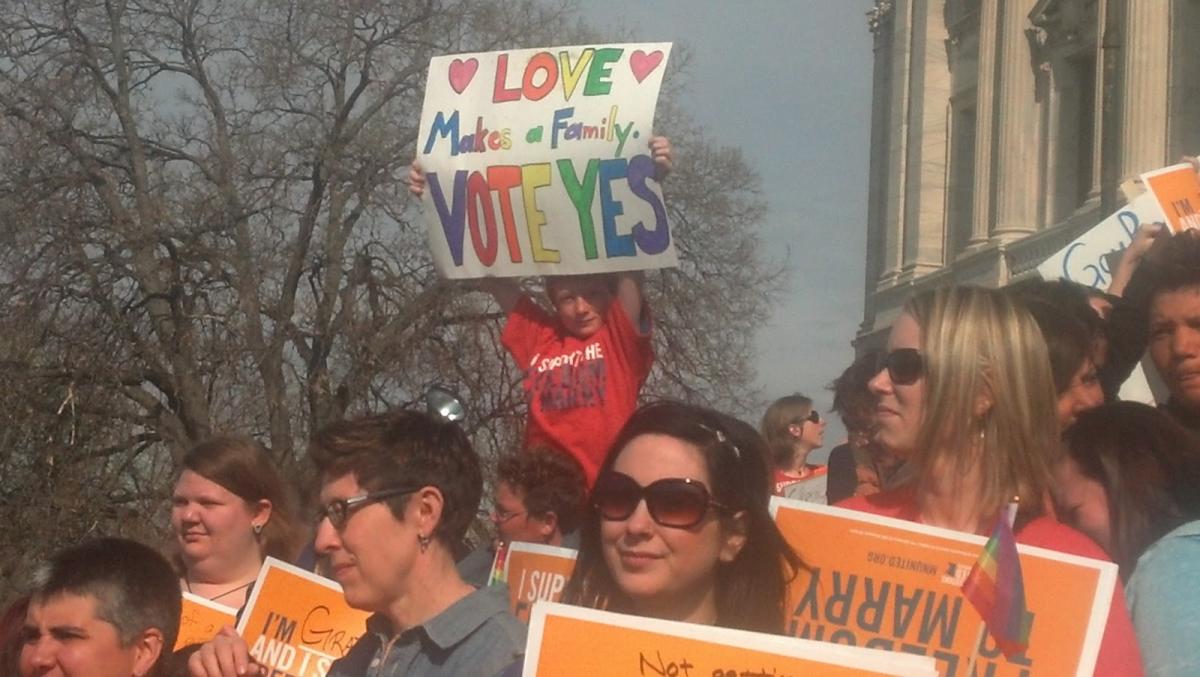 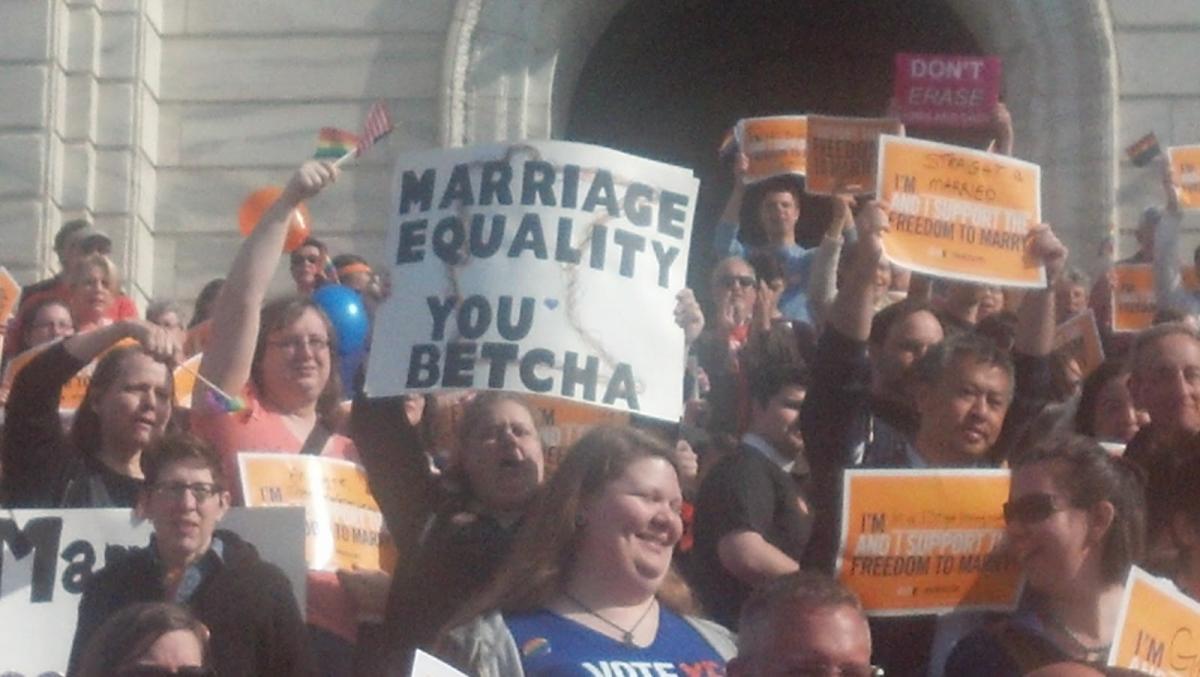 I remember being drawn to Maya Angelou and Mildred Taylor and Harper Lee as a middle school girl in rural white Iowa. As someone almost embarrassingly “normal”, whose only major oppression is that of her own mind, I felt gobsmacked reading about people whose daily life was filled with oppression and discrimination. I know now that it was part of an education that went far beyond the page. When Atticus told Scout to “walk a mile in someone else’s shoes” I took it literally and have worked hard throughout my life to at least allow myself to dip my toes in water than might not always feel good to me. Not everyone resides from a middle-class, heterosexual white world and it has served me well to remember that.

But I have to confess that I never thought simple life experience would turn into anything that had purpose. What a surprise this has turned out to be.

Life happens, and if you pay attention it guides you in ways you could never have imagined. If you are wise, you follow. 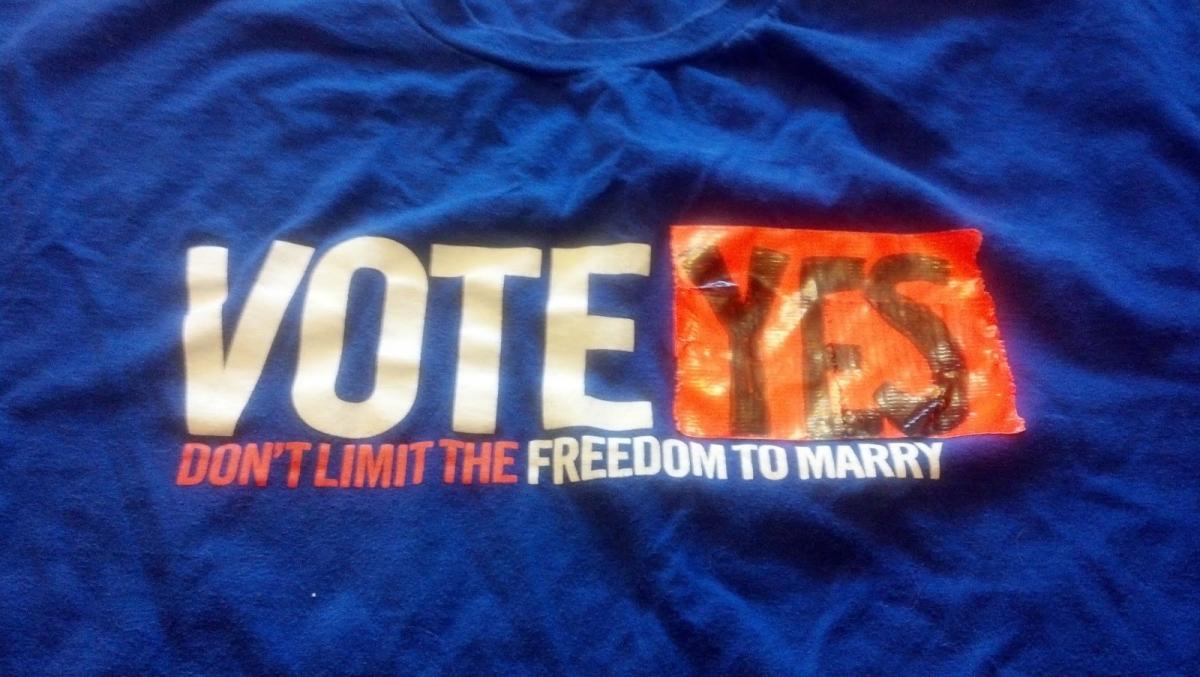 A VOTE No fall campaign shirt recycled to VOTE Yes for gay marriage.

And follow I did. Most of you know this part of the journey for me so I won’t belabor it. Nor will I ever claim to have had a major part in Minnesota’s historical moment. But I did make some noise and while it was barely a whisper in the last few months, I needed to be there yesterday to understand that this is what democracy can do. I needed to see with my own eyes that our voices can and have been heard. It’s easy to get jaded into today’s political climate, but there I was watching it with my own eyes.

Two years ago, I was sitting in the front yard with a few people including my husband and Jeff and Lori Wilfahrt. We were trying to figure out how we could make some sort of difference in the way our state was then proposing to leave out gay people. None of us then would have predicted this day. 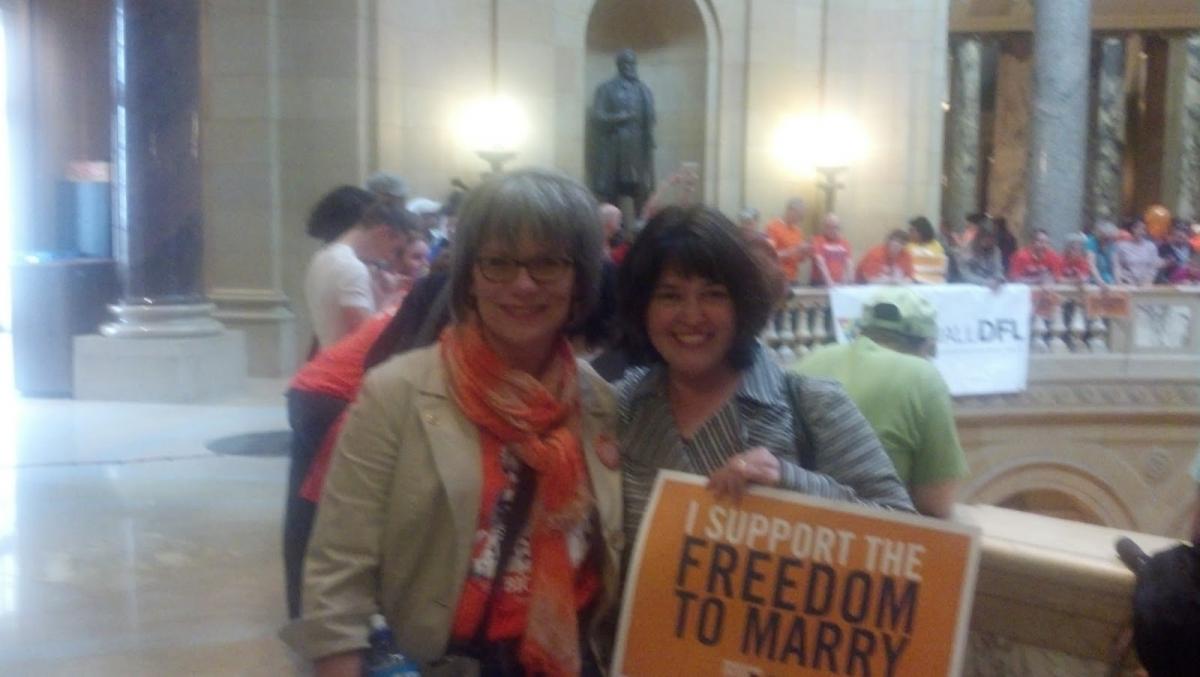 Lori Wilfahrt, celebrating a movement that continues to honor the spirit of her son, Andrew. 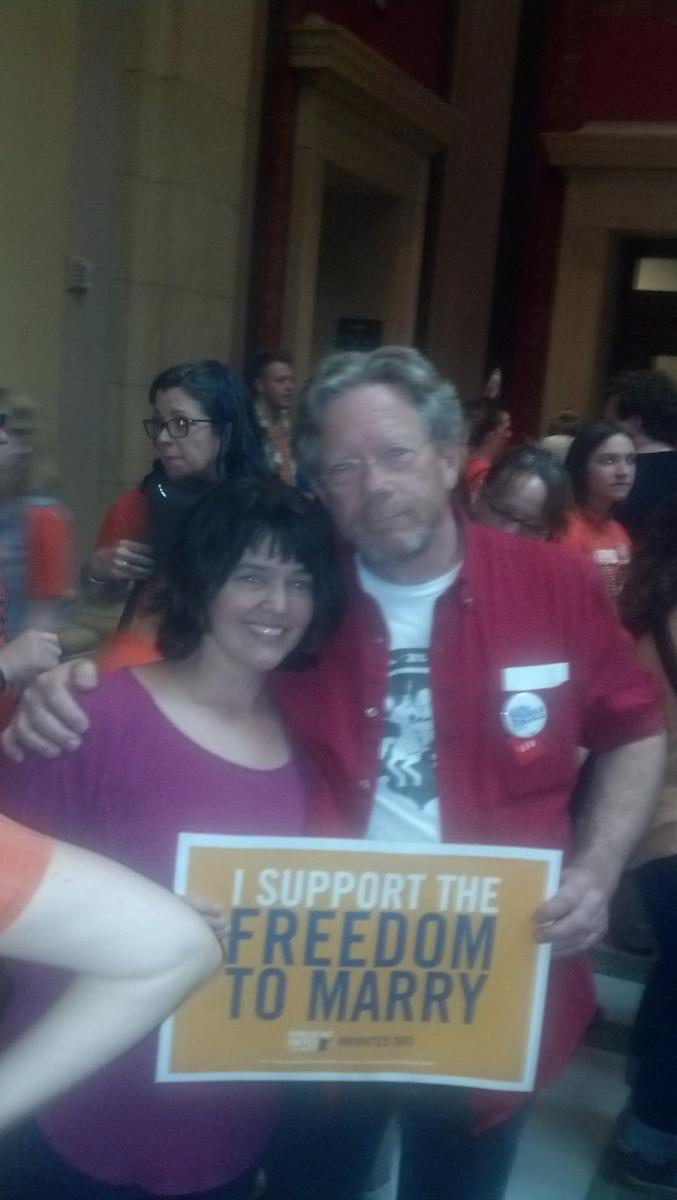 Jeff Wilfahrt honoring his son and countless others he met along the way.

But what has brought our state to this day is simple. It has been our stories, the backbone of the whole campaign. “This is what happened to me” has been whispered and chatted and shouted and sung and written and emailed and prayed about all over this state. It has been our willingness to share and our willingness to listen and to inhabit and imagine, “What if that were me? What if that were my child, my sister, my brother, my neighbor, my friend?” that has moved so many people.

So many of us have tried on another pair of shoes and paid attention to how they fit. It is clear to many that some adjustments need to be made.

And here we are, the twelfth state in the nation to fully embrace more of the good people who have been serving and loving and working and contributing all along.

It feels nothing short of wonderful to have been a part of it. 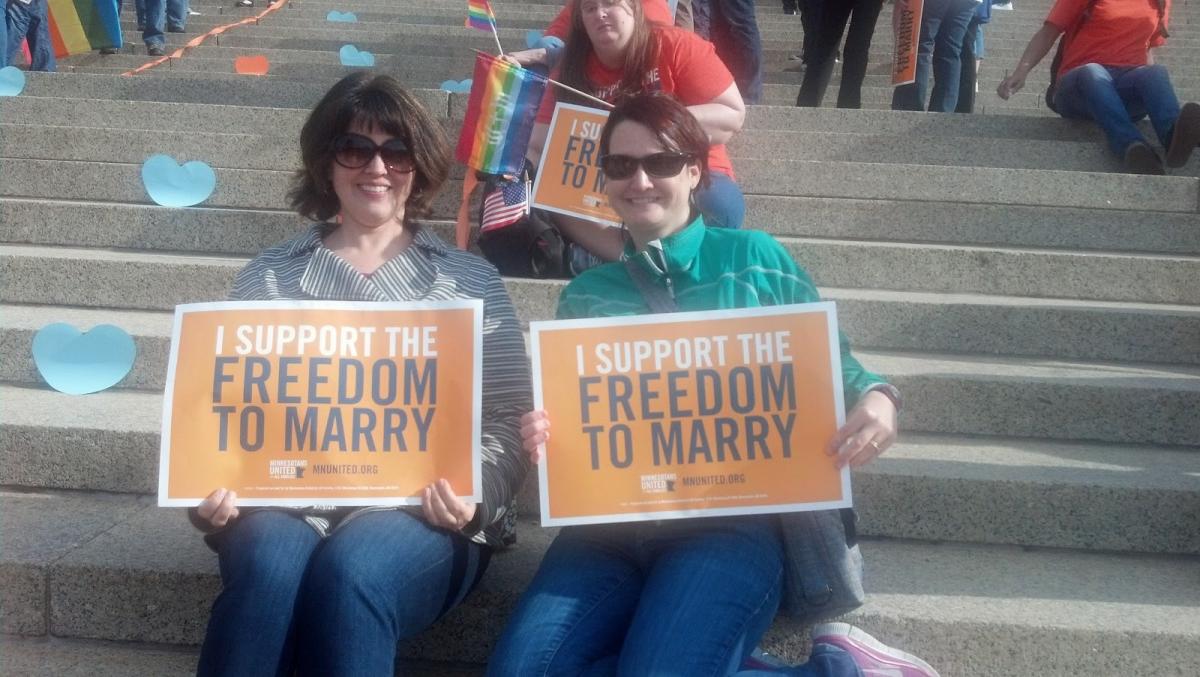