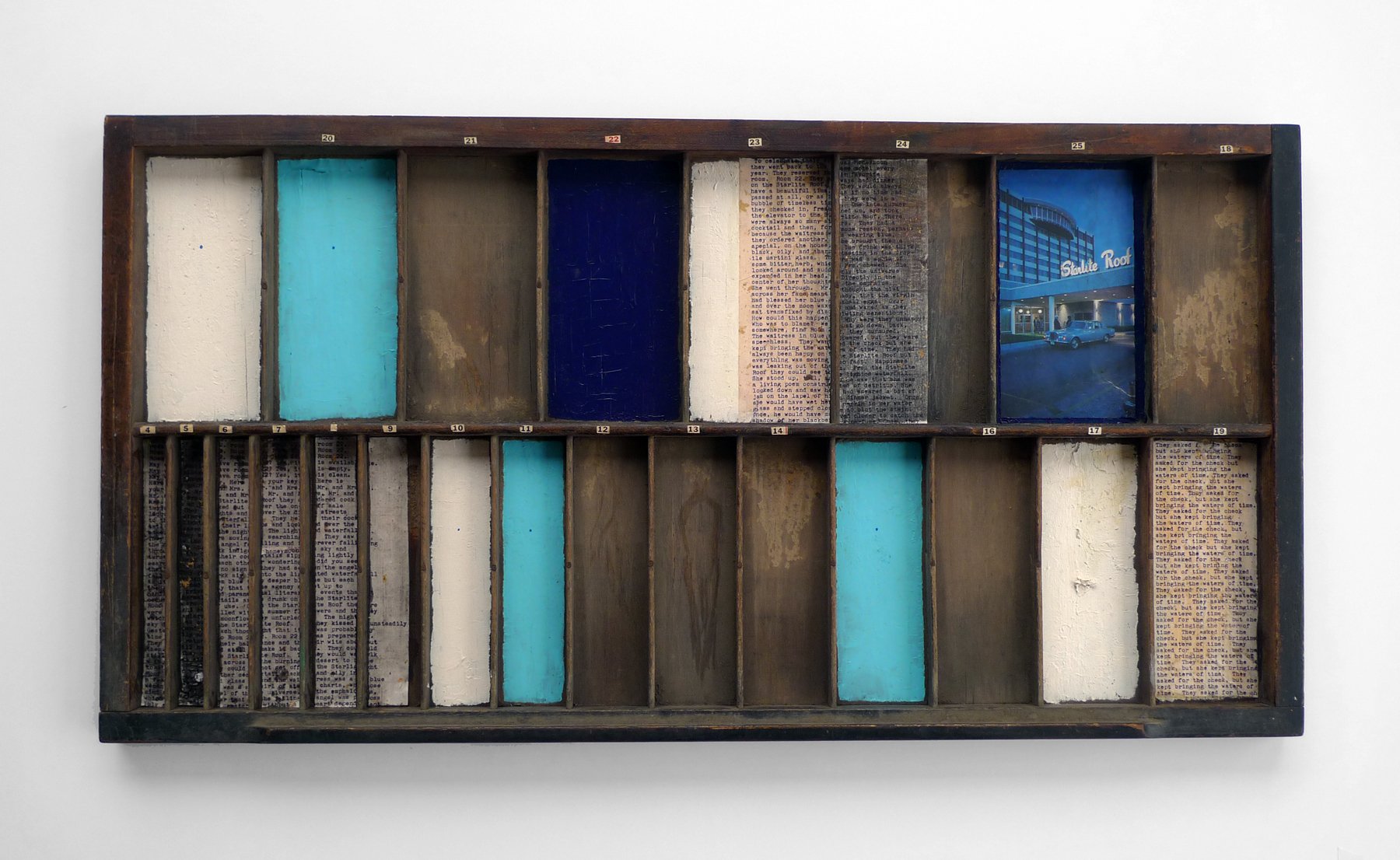 Award winning writer Louise Erdrich is best known for her prolific novels such as the Plague of Doves, Love Medicine and The Round House, but she’s also a visual artist. Asynchronous Reading, a new show curated by Heid E. Erdrich at Bockley gallery is the first time her works will be on view. Asynchronous Reading presents Erdrich’s paintings, collage boxes, and found-object constructions along with poetic text and audio works to create an experience to be viewed, read, and heard. Aza Erdrich and Pallas Erdrich, Louise’s two daughter, contributed key images and media works to an installation curated by Heid E. Erdrich, who also collaborated on parts of the exhibit.

It all started when Louise wondered to herself, “Why am I drawing these lines?” Heid remembered saying to her, “You’re abstracting the process of writing.”

“I always felt that her house was a Cornell box,” she says referring to the American artist and sculptor Joseph Cornell, who was known for his assemblage.

Viewers at Bockley gallery will be encouraged to pick up a phone to hear advice, a story about two people stuck on the roof of a hotel, and a message to a secret agent. Asynchronous Reading also features paintings by Aza Erdrich, one of which viewers will recognize from the cover of Louise’s novel The Round House. The show has a lot of text, a lot of narrative both seen and unseen, which is what you would expect from two literary sisters. I was lucky enough to catch these busy ladies as they installed the show.

TCDP: This has been in the works for a while now. Let’s talk about this show.

Louise Erdrich: I had bits of narrative that have been floating around for a while now. I didn’t know what to do with them until I talked to Heid. I realized I was painting the lines of a novel, instead of writing them. The paintings in this show represent the space in your head where you don’t have words. It’s a meditative state. It was really helpful when writing the new book I’m working on. Heid really encouraged me and we came to Todd and showed him a few pieces, and he was also really supportive.

TCDP: Ok, the phones in the gallery. What are they doing here and what can listeners/callers expect when they pick one up? What number can they dial?

LE: Heid and I had a dream about phones. We were always saying, ‘How can we get a phone to hold on to some poetry.’ So, my daughter Pallas is a tech whiz…she loves taking things apart and figuring out how things work. So, she got these great phones from Estonia, the Ukraine and re-wired them. One phone has a reference to a previous work called Advice to Myself. There will also be several phones on a table that continue the narrative in the piece Room 22. It’s the story of these two people trapped on the roof of the Starlight Hotel. They keep asking the waitress for the check and she keeps bringing the waters of time.

You can also put in a call to an agency and Heid is the agent. I left a message for her on this phone. None of these stories (on the phones) is a traditional narrative with a beginning middle and end. It’s a mystery. It’s elusive. It’s unscrewed.

TCDP: Heid how did you get involved as the curator?

Heid E. Erdrich: Louise kept working on these paintings and didn’t know what to do with them. I just thought they were beautiful constructions and we started talking about, ‘What if this was a show?’ So, we started to think about how we would do this. I wanted it to be a media installation because I’ve been working in film lately. And then Pallas got involved and re-wired these phones. I hadn’t expected to write anything but then this idea of an installation came about with Agency Apophany created at a kitchen table, which was my way of stopping Louise from tying the show all together. We don’t want people to know the answers. We want some things in this show to remain a mystery because contemporary contains mystery.

Also, Louise asked me about her paintings. She said, ‘Why am I drawing these lines?’ And I told her, you’re abstracting the process of writing.

It was very fun and this was the first time we’ve worked together.  So far, we haven’t had any fights (laughs).

TCDP: You said you feel, as a curator, some tension about contemporary art. Can you explain what you mean by that and how it relates to this show?

HE: I have these questions about how art is accessed. Do we need to know everything about it? Some artists want a lot of context, and some don’t. Louise is a novelist, so her tendency is towards narrative. As a Native artist, do you need to speak to non-natives in your art? There are things in this show that will speak to Native people because Native people made the.  I just thought, ‘Let’s just express our artistic urge and not be worried about audience expectation. I love to write about things and give them context, but in this case the context is somewhat fictional.

Louise Erdrich: Asynchronous Reading opens April 1st at Bockley Gallery and will be up through April 18th. Opening reception begins at 6pm and there is no cost.

Bockley Gallery is located at 2123 W 21st Street in Minneapolis, in the Isles neighborhood.