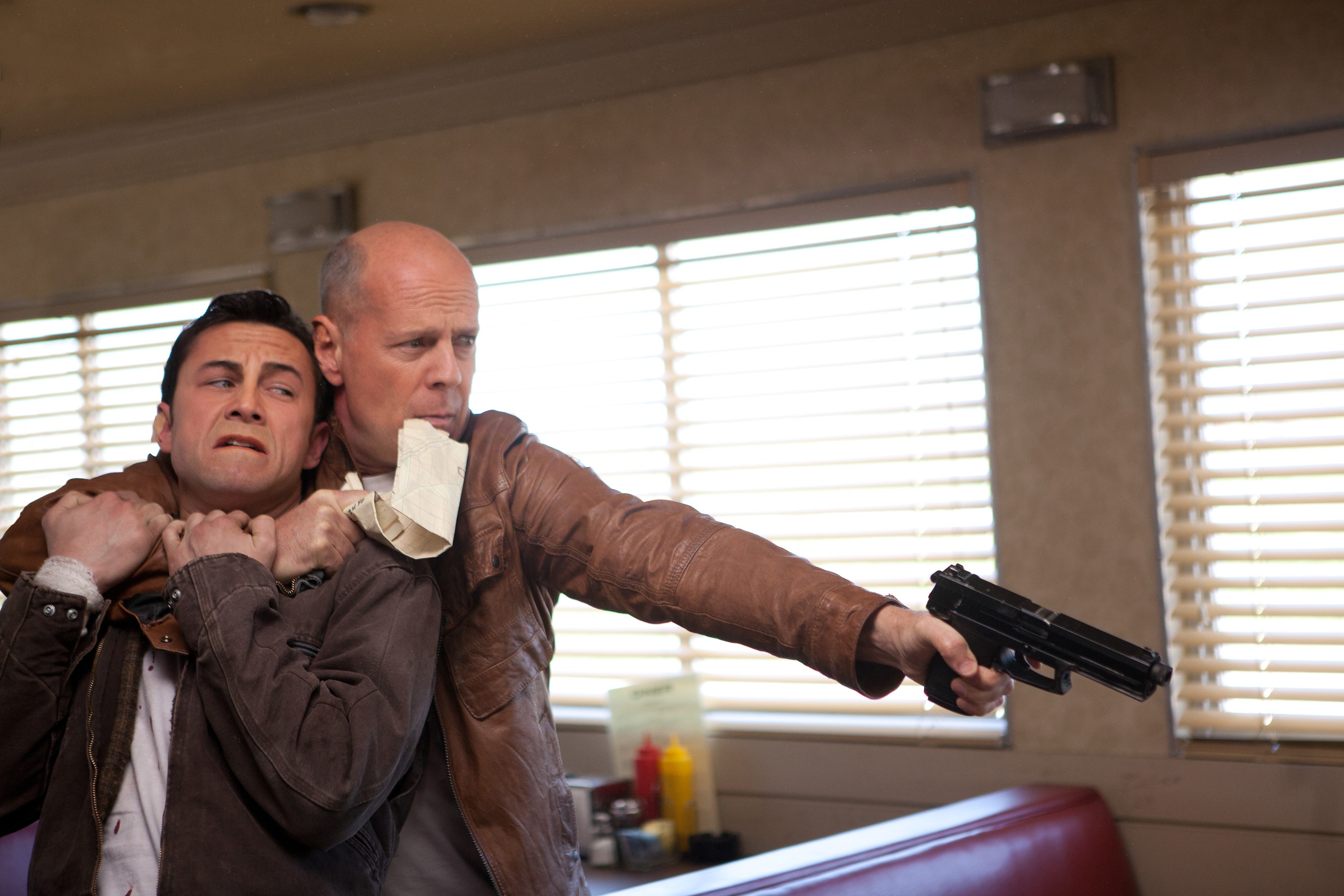 You don’t see too many futuristic time travel movies that take place in the cane fields of Kansas, but that’s precisely the setting of writer/director Rian Johnson’s film Looper. The unusual backdrop isn’t the only curveball Johnson throws in his latest effort. Multiple storylines, shocking acts of violence, and unique concepts abound in the world of Looper. I’m glad I don’t exist in this movie universe; I probably wouldn’t last a week before getting run over by a floating motorcycle or getting shot for staring at somebody’s car the wrong way.

This all-too-vicious future of Johnson’s takes place in 2044. We’re given a main character in Joe (Joseph Gordon-Levitt), though he’s nothing of a hero when we first meet him. Joe is a Looper. The bulk of his job requires going to a secluded, assigned position with a gun, waiting for a person to magically appear before him, and shooting the out-of-thin-air-appearing person. How is this possible? Why haven’t we heard of this blood-splattered gig at job fairs? Time travel exists in Joe’s world. Actually, it exists thirty years from his time, but the 2072 mob sends back guys they want snuffed out to Loopers in the past. That way it’s like the guy/gal never existed in the first place. And it’s a lot less strenuous than throwing a body over a bridge or dumping it into a grave.

One day a terrifying thing happens to Joe while he’s on the job. The person who appears, the one he’s supposed to kill, is himself. A thirty-years-older version of himself: Old Joe (Bruce Willis). Naturally, Joe is stunned and Old Joe gets away. This doesn’t make Joe’s boss Abe (Jeff Daniels) happy. Abe’s been sent back in time by the mafia to manage the Loopers, after all, and he doesn’t look good if one of his Loopers has two of himself running around. Abe gets so mad, in fact, that he puts a death bounty on Joe’s head. Frantic to fix things by killing Old Joe, but in desperate need of a place to hide out, Joe finds refuge at an isolated cane farm where a woman, Sara (Emily Blunt), is raising her scary smart young son, Cid (Pierce Gagnon). Meanwhile, Old Joe runs around a nearby Kansas metropolis and attempts to save the life he was torn from.

Looper simply works on a lot of levels, but its sturdy foundation lies in strong, darn near unforgettable, acting. Gordon-Levitt starts out egocentric and makes a gradual transition to being humble and putting others before himself. It’s a long road, though, and Gordon-Levitt shows he can play a cocky know-it-all with a taste for silver and a nice guy with a gun equally well.

Willis may take a backseat for large chunks of the film, but he still brings plenty of bald-headed bad-assery to the table. While he does deliver John McClane fighting skills with even more precise speed than he did in 1988, Willis also gets a chance to showcase a part of his body that isn’t his trigger finger: his mouth. Yes, Willis gets some juicy dialogue, particularly in scenes when he talks with his younger self. It’s fun and a bit bewildering to watch Old Joe chastise Joe like he’s the stern father grounding his son. For every bitter rebuttal Gordon-Levitt dishes out, Willis has a witty, and often times wisdom-filled, response.

If you didn’t know Emily Blunt from Adam West when you bought a ticket for Looper, then you wouldn’t notice she’s actually British. She hides her accent that well (I wonder if she and Kate Beckinsale use the same speech coach), playing the brittle back road farm girl with surprising confidence, shotgun and all. Blunt has a lot of layers in this one. Her motivations are murky, and Johnson only spoon-feeds us bits of her backstory at a time. While we don’t initially know why Blunt is so protective of her son, you don’t question her actions because she’s so resolute and more than a little empathetic.

Empathy. That should be the Sesame Street word of the day for this film. Johnson’s screenplay grabs characters from all across the board and holds them up to a light that makes them investable. Even Abe and his eager lackey known as Kid Blue (Noah Segan) are not being evil just for the hell of it. They’ve got reasons for doing what they do.

Johnson does unexpected things with his characters. Gordon-Levitt is forced to make a very grown-up decision early on, while Willis commits an act of unspeakable horror on his revenge quest. There is violence, and while Johnson doesn’t always keep the camera on it, your imagining of what’s happening off-screen is graphic enough to keep you awake at night until the Tylenol PM kicks in.

Overall this is a fantastic film. It goes places you never expect. Who knows, you might even get a little uncomfortable at times! Johnson’s take on the time travel genre is bold and innovative. It’s so “out there” in creativity, though, that some pieces don’t fit as neatly as I think Johnson planned. Let’s just say that Looper doesn’t hold up as well as fellow ultra-complex film Inception when you look at it closely, but it’s still worth your five or ten bucks and your undivided attention.

Looper is rated R, has a runtime of 1 hour and 58 minutes, and was given a wide United States release on September 28, 2012.