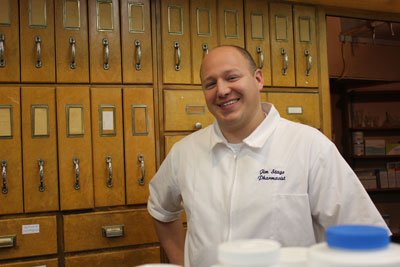 Jim Stage said he was just getting his “feet wet” as the new owner of Lloyd’s Pharmacy on Snelling Avenue in the Hamline Midway neighborhood when Tom Sengupta contacted him and told him he was selling Schneider Drug, 3400 University Ave., in Prospect Park.

Lloyd’s longtime owner, Ron Johnson, sold the business to Stage in November. On Jan. 27, Stage became the new owner of Schneider Drug. Both Johnson and Sengupta owned their businesses for more than 40 years.

Stage had worked for several years at Lloyd’s with Johnson, who he credits with teaching him a lot about the pharmacy business. Stage grew up in the Midway area of St. Paul, attending Central Lutheran School on Lexington Avenue and graduating from Concordia Academy in Roseville. He attended pharmacy school at North Dakota State University in Fargo, then returned to the Twin Cities where he worked for a couple of independent pharmacies Jim Stage, new owner of Schneider Drug Photo by Kristal Leebrick and CVS, before joining the staff at Lloyd’s.

“I was really trying to learn to ride a bike over at Lloyd’s,” when Sengupta told him that Schneider would be on the market, he said. “Tom wanted to keep [Schneider] independent, and he was adamant he didn’t want it to become a Walgreens or CVS.”

Stage, who lives in St. Paul with his wife and five children, said the two stores have their own unique qualities, and he intends to keep them that way.

Schneider customers will see some changes, however. One of the biggest: more phones. Sengupta operated with one phone line for many years, but Stage is planning to add more lines and wants to develop some mobile apps and a website that will allow people to order prescription refills online.

He also plans to enhance the store’s delivery service by making it available six days a week during daytime hours. Other items on his to-do list include offering blister packaging for customers managing multiple prescriptions to help them take the right medication at the right time and working with the University of Minnesota’s pharmacy school to help students learn about the business.

Rich Mann, who had been at Lloyd’s, will be the managing pharmacist at Schneider Drug.

Stage acknowledges that he’s stepping into a business where the decades-long proprietor was muchloved and a big part of many people’s lives.

“Tom knew people’s voices when he answered the phone,” Stage said. “I have to ask their names and birthdates. I appreciate their patience.”