A memorial has been placed on the tree stump where the incident took place.

Maybe the kitty had a loving home.  Maybe he would sleep with his family at night.  Perhaps he liked to wake them early in the morning for food and attention.  His name could have been Whiskers or Shadow or George.  He might have given his family comfort in difficult times and joy in easy times.

Disclaimer to readers: I freaking love cats.  Sitting in my living room, staring at my beautiful kitty Doc sleeping, I found it impossible to understand how a fellow human being could do what they did in Longfellow Park early this week .

Monday morning, a park employee found a cat staked to a tree stump, the stake having slashed its throat.  The cat was incinerated, and a United States flag was planted in the throat gash.  Near the corpse was an Obama/Biden lawn sign, a tin of cat food, and a can of iced tea.

Law enforcement is taking the crime seriously, as it could construe a terroristic threat to the president.  Agencies involved include the Minneapolis police, the Minneapolis Park Board, the Secret Service, the Federal Bureau of Investigation, and the Department of Homeland Security. 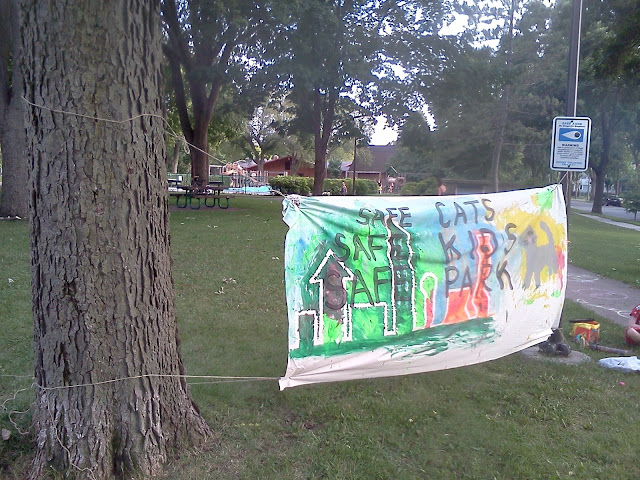 While finding justice for this crime is important, one local boy realized another important task: cleansing the park.

Spencer Snyder of Longfellow neighborhood was so saddened by the news of a defenseless kitty being gruesomely murdered in his favorite park, he wanted to have a gathering to renew the community’s energy.  He and his parents, Kristy and Dave, organized a vigil at the park Wednesday night. 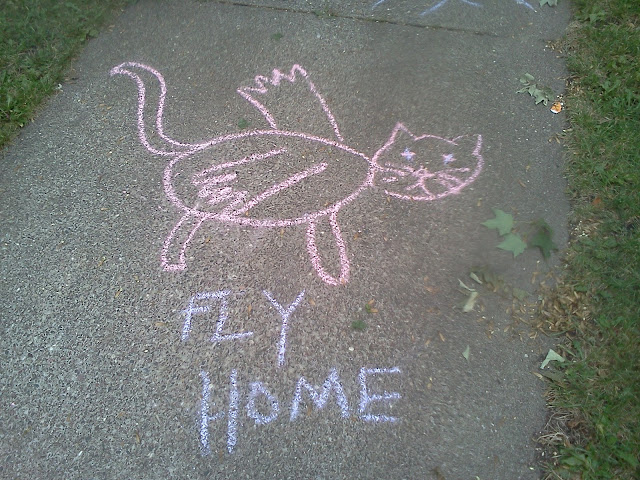 The vigil began with chalk drawings on the northwest entrance to the park.  Some drew their own cats, and some drew original cats.  There was a cat angel and a cat guardian with the warning “We’re watching our park.”  Near the chalk drawings is a colorful handmade banner proclaiming “SAFE CATS, SAFE KIDS, SAFE PARK.”

Around fifty people arrived for the vigil, and about half were kids.

A speaker from the Longfellow Faith Forum gave a nature-based blessing of the park and the animals.  Councilmember Gary Schiff who represents Longfellow spoke, holding his rescue dog Butters, saying that “when we rescue animals, they rescue us.”  He pledged that Minneapolis Animal Care and Control has stepped up prosecution of animal cruelty.  He affirmed that the neighborhood is not intimidated.  Councilmember Meg Tuthill was also in attendance.

Kristy asked the kids what their favorite thing about Longfellow Park is.  Spencer loudly and enthusiastically shouted “I like to play here!”  Another kid said he liked the pool.

The Snyders distributed cookies on sticks with “SAFE CATS” written in icing on them.  After the speakers, there was a parade around the perimeter of the park complete with banging of percussion instruments.  Meanwhile, in the busy park kids played in the playground or on the football field, families biked, and adults played kickball.  The vigil concluded with balloon kitties. 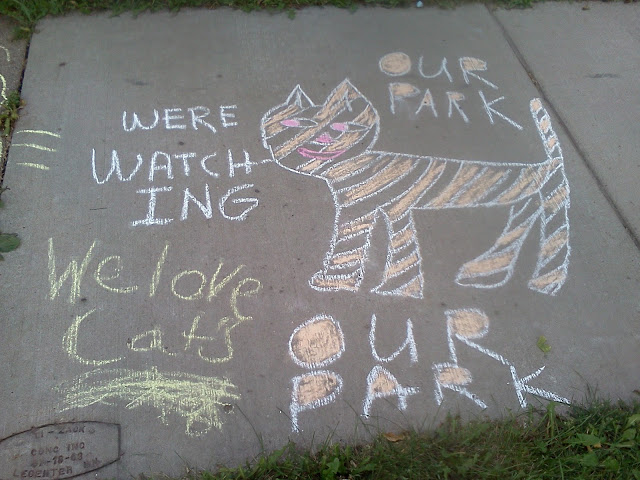 The cat did have an implanted microchip, but the number on file was disconnected.  Authorities are still trying to find the cat’s family.

The Minnesota Federated Humane Society has offered a $1,000 reward for information leading to the arrest and conviction of the person(s) responsible.  Anyone with information is asked to call MFHS at 612-866-8663.