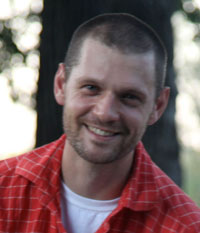 Nate Christopherson describes author Amy Leach’s new collection of nonfiction essays, Things That Are, as “a book about curiosity.”

The Avalon School special education teacher illustrated the book with pen-and-ink drawings that he hoped would echo Leach’s meditations on plants and animals. “She’s a really interesting brain to be inside,” he says. “The first half is bizarre curious animal phenomena. The second half is really about space. It’s kind of a metaphysical book. It’s like you are inside her head.”

The book design is meant to be “an illumination of her writing,” Christopherson says. “It reminds me of the old medieval books they used to do that are an explanation of everything. They’d have chapters on cities: What do cities look like? And how does the earth work and the sun, and they’d have beautiful illustrations with them to illuminate them.”

Leach is “a beautiful, curious writer,” he says. “It’s really hard to do it justice in a way.”

Christopherson says his work is influenced by the wood engravings from the Works Progress Administration (WPA) era, particularly Rockwell Kent. The WPA was a part of President Franklin D. Roosevelt’s New Deal program, which created jobs through a number of public works projects and large arts, drama, media and literacy programs. 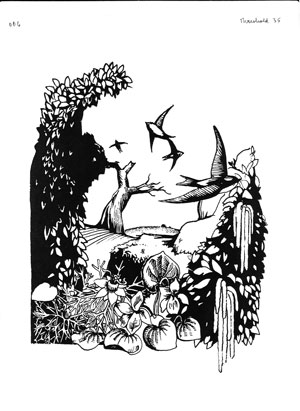 “I certainly looked at some of his stuff when I was doing this,” he says. Christopherson has a lot of experience with wood engraving, the production type of illustration in the 1800s into the middle of the 1930s. But wood engraving is extremely time consuming, he said, so he drew his images on a translucent material called Opalux, which allowed him to draw black lines and then scrape away white lines as an engraver would.

Christopherson, 31, grew up in St. Anthony Park and now lives in Como Park with his wife and 20-month-old daughter. He took some art classes as a student at Central High School in the late 1990s, but says he really started doing a lot of art at St. Olaf College, where he took his first printmaking course.

After graduating with an art degree, he went on to graduate school to get his special education degree. In many ways, he is following the path of both of his parents. His father, Charlie Christopherson, is media specialist and librarian at John Glenn Middle School in North St. Paul. His mother, Tara Sweeney, is an art professor at Augsburg College in Minneapolis.

After working at the High Point Center for Printmaking, he says he began to think about illustration and working on the technical aspects of drawing shadow and light. That moved him into black and white illustrations, he says.

Christopherson and Leach didn’t meet until they had their first round of Twin Cities publishing events in July, including one at Micawber’s Books on July 18. Despite that, he said, through the course of the work he felt “she’s sort of a kindred spirit. There’s this whimsical thing to her writing that I really love,” he says. “I really love curiosity.”

Leach, Christopherson and the editor, Patrick Thomas, collaborated through most of the book’s production process via email, a process that worked well for Christopherson.

“My experience with this has caused me to move a lot more into collaboration with people because it was so much fun to work with other people to get their take on things to incorporate their views and what they were excited about. It made the work a lot better,” he says. “You end up in a really good conversation that will take you somewhere you wouldn’t go. That’s what happened with this both from reading the book and talking with Amy and the editor, Patrick. I got to go in a direction that I probably wouldn’t have gone on my own. I learned a ton of stuff about drawing.”

You can find out more about Christopherson’s thoughts on illustrating this book at http://milkweed.org/blog/interviews/nate-christopherson-on-illustrating-amy-leach-things-that-are. You can also find the book at Micawber’s, 2238 Carter Ave.

Nate Christopherson’s illustration above introduces Amy Leach’s essay “Love-in-Idleness” in the book Things That Are.