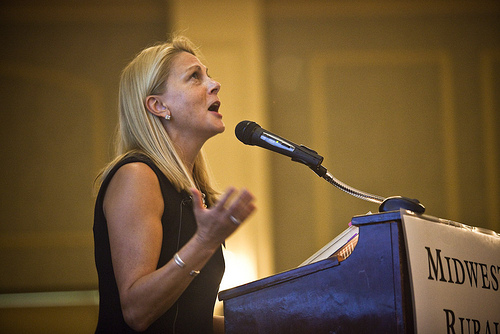 “I felt like I had nursed a low-grade feud with where I grew up” for many years, Debra Marquart told participants at the Midwest Rural Assembly in South Souix City, Iowa on Monday morning. Marquart is an English Professor at Iowa State University and author of the book, The Horizontal World: Growing up Wild in the Middle of Nowhere.

The book, spurred by the death of her father and wanting to understand more about the North Dakota town where she grew up, is the culmination of 14 years of research in small town libraries, cemetaries and interviews. Marquart left the small town of Napolean at age 17, but always carried the photo of the long road leading to her house with her. She went to college, toured with rock bands and then found teaching. The book documents her journey to learn more about the hometown and farm she grew up on but didn’t pay attention to during much of her childhood spent working on the farm. As she described it, people there “lived on the narrow margin of life.”

Her great grandfather emigrated from Russia in 1886 and built a large house with a balcony to look out over his acreage with the hope that future generations of his family would live on the land. But growing up in the 60s and 70s, Marquart couldn’t wait to leave.

Marquart’s book highlights one of the central themes of the Midwest Rural Assembly: How to engage young people in ways that they see the value of small towns and the land – before they leave. Several of the panels here later this afternoon will look at this challenge more deeply. Marquart was optimistic, describing how her hometown has actually grown in the last ten years. Many people are returning who left when they were younger. Others are attracted to some of the same traits that brought her great grandfather to North Dakota: low housing and land costs and a connection to the land.