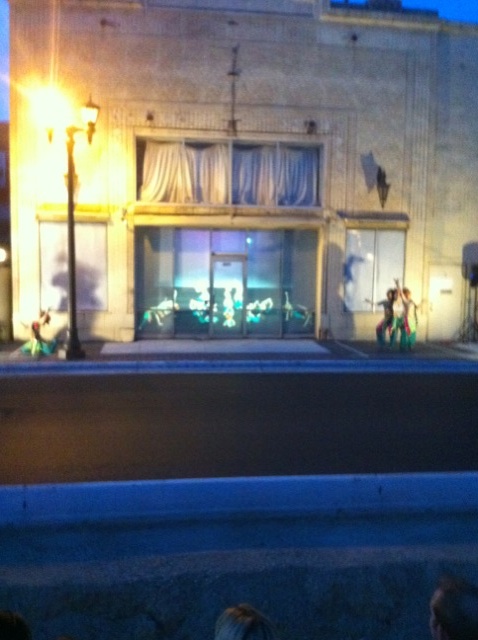 On Sunday night I took my children to see “Lights of Victoria,” which is the latest project emanating from Irrigate-the unique artist led placemaking initiative spanning the six miles of the Central Corridor Light Rail line in Saint Paul during the years of its construction. If you don’t know about it, you should check out it’s website and see the wide variety arts-oriented projects being supported. It runs the gamut from visual to performance to streetscape to everything. It is the brainchild of the smart people at Springboard for the Arts and is a partnership between them, Twin Cities LISC, and the City of St. Paul. I love it.

The Lights of Victoria was a dance performance that filled the vacant facade of the old Victoria Theater. The Iny Asian Dance Theater troupe, which is a Hmong comtemporary dance group that does dance inspired by a variety of east Asian cultures, organized the performance. It was like nothing I had seen before. They danced on the sidewalk, but they were “synchronized” with a taped performance that was projected onto the facade. My explanation is struggling, but luckily someone put it on YouTube. As you would imagine this only works when the sun goes down so they went on Saturday and Sunday at dusk (about 7:15pm). The lights for the projection also illuninated the shadows of the danceers on the theater for quite an effect.

The coolest part of the whole thing was getting to sit on the LRT tracks to watch the performance. And the cars driving by just added to the eclectic urbanism of it. I couldn’t get a good picture of the audience but it was quite a site, especially with the illuminated capital at the end of University and the large harvest moon above.