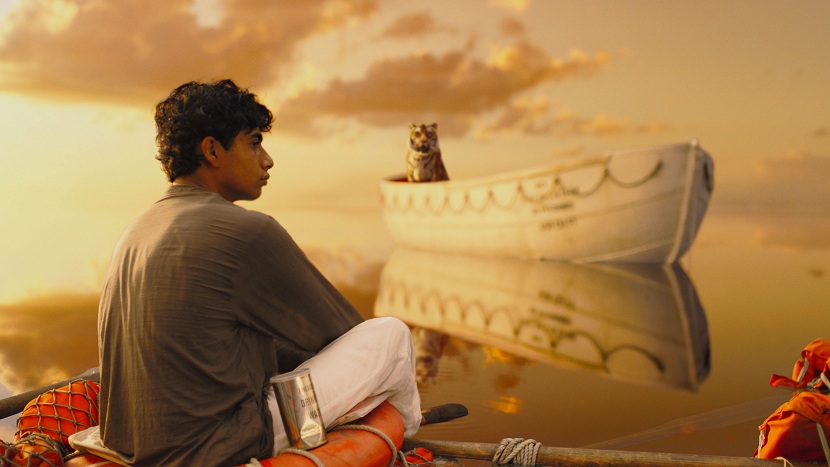 When you survive a shipwreck, your main concerns are most likely to be staying afloat, drinking clean water, and keeping your hunger at bay. Dealing with a Bengal tiger shouldn’t be on your to-do list. Alas, teenager Pi Patel (Suraj Sharma) must deal with such a radical and dangerous X-factor when he is the lone human survivor of a sunken Japanese freightliner. Unfortunately, the kitty he shares a lifeboat with is used to being fed raw meat—making even a skinny vegetarian boy part of the menu.

Sixteen year-old Pi does not want to leave India. He has lived an interesting life there with his older brother, mother and father in Pondicherry. Here he followed three religions at one time: Hindu, Christianity, and Islam. Here is where Pi helped his father run a zoo filled with exotic animals, including a zebra, orangutans, and a Bengal tiger named Richard Parker. And here is where Pi fell in love with a girl, a relationship destined for heartbreak in the midst of a massive move.

Pi’s father, a firm believer in the Western way, orders the move. Money is tight. The zoo isn’t bringing in the bucks like it used to. To provide a bright future for his sons, Pi’s father sets the family’s sights on Winnipeg, Canada. They will sell their animals after crossing the Pacific Ocean, using the money to affirm their lives in a brave new world. Pi’s family, along with their animals, boards a Japanese freighter named Tzimtzum. And so their trek toward a horizon of hope begins.

It ends suddenly, though. A ferocious storm surrounds Tzimtzum, battering it with wave after rollicking wave. The freightliner experiences complications and sinks. Pi and a zebra stumble onto a lifeboat and escape their underwater graves. Soon more survivors join them onboard the tiny vessel: none of them human. An orangutan, a spotted hyena, and the Bengal tiger Richard Parker climb aboard, creating a riotous ragtag group that’s destined for conflict if food chain statistics are any indication.

After those conflicts play out, the game of survival at sea is affirmed with Pi and Richard Parker as the only remaining players. In order to survive the unforgiving ocean landscape, they’ll have to set aside fears and appetites and learn how to live together, which is easier said than done. Think you have a difficult roommate? Try a tiger!

Writer David Magee based the screenplay on what was widely considered to be an un-filmable book by Yann Martel. The story behind Life of Pi is rich with meaningful dialogue, religious allusions, and tense surprises. Magee recognizes the ocean as a beautiful and destructive place; he realizes that gentle and lethal things can come from it, be it a jellyfish or a shark, a rainbow or a storm. He mines the ocean’s many layers and uses what he finds (with the aid of Martel’s book, of course) to create a memorable, almost mythical tale of survival that somehow manages to come across as awe-inspiring and brutally realistic.

It’s easy to root for Pi in his fight for survival, because by the time the Tzimtzum is swallowed by the sea, you already know Pi very well. Roughly the first forty minutes of the film follows Pi as he grows from an optimistic boy obsessed with religion to a listless and bored teenager on the cusp of adulthood. You take a journey with Pi before he’s lost at sea, a journey filled with rich, colorful anecdotal bits that build character development and influence future decisions, as each lesson Pi learns growing up helps him live longer as a castaway.

Director Ang Lee won Best Director at the 85th Annual Oscars for Life of Pi, and yes, he did deserve to win over Steven Spielberg. The direction here is flawless. The result is a thought-provoking film that packs an emotional wallop so powerful it leaves you exhausted and ready to call in sick the next day at work, so your heart can repair itself after being broken. Lee knows how to juice every scene of all its emotional worth, never wasting your time and always tugging on your heartstrings. 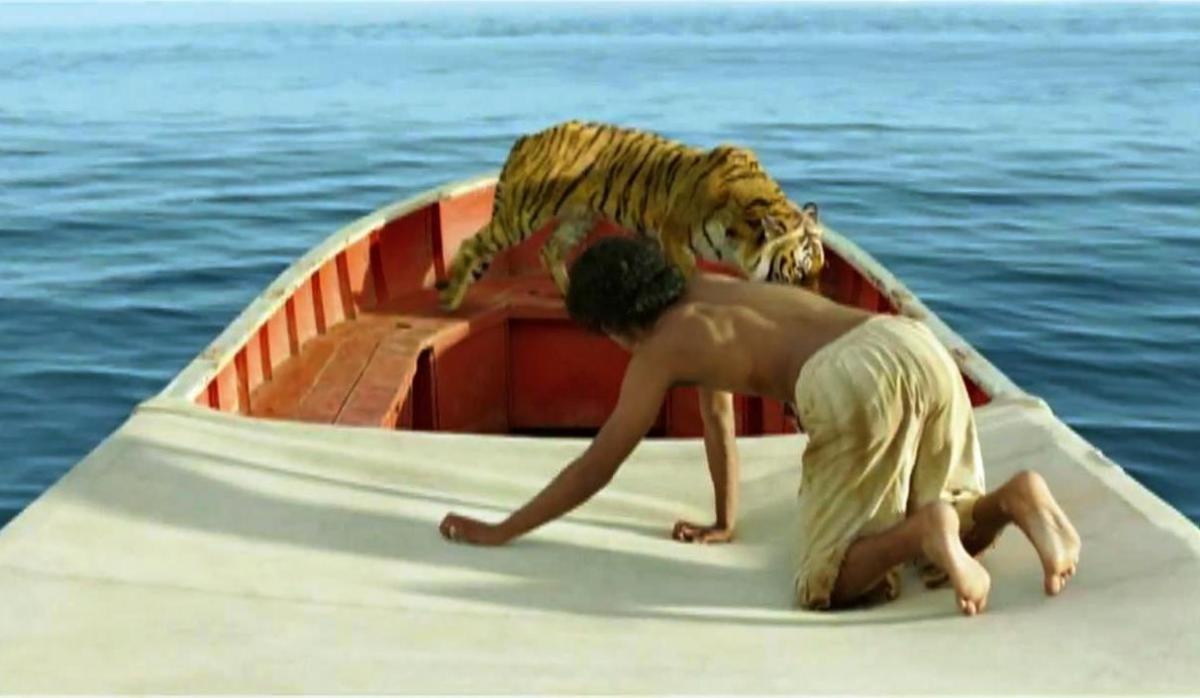 The performances are elevated by Lee’s presence, even those by the CGI-animals. Lee zooms in on the faces of Richard Parker and the orangutan, letting the brilliant visual effects (another Oscar winner) depict them as being happy, sad, or angry through facial expressions that drip with mood. Subtle zoomed-in shots of Pi’s increasingly troubled face are intermingled nicely with sweeping overhead shots of the still ocean that make the tiny lifeboat seem like the only solid thing on a planet of water. With his first directorial effort since 2009’s Taking Woodstock, I think it’s safe to say Lee has solidified his status as one of the most efficient filmmakers of his generation.

In his acting debut, Suraj Sharma gives a completely convincing performance as Pi. With the extreme confidence and wide emotional range Sharma brought to his role, I would have thought he’d already been in twenty films prior to this one had I not researched his Wikipedia page before seeing this movie. Though Sharma doesn’t go as deep into the crazy woods as Tom Hanks did in Cast Away, he still portrays a definite psychological transition as his days lost at sea pile up. Sharma, who makes his character’s situation believable by bringing real fear and hopelessness to the screen, depicts this transition very well. For now, Sharma is electing to return to St. Stephen’s College, where he studies philosophy. While I’m all for Sharma continuing his education, I still eagerly await his next film.

Beneath the immersing visual effects, skillful direction, wonderful writing, and spot-on acting, Life of Pi is a movie about spirituality. Themes of religion, faith, redemption, and forgiveness abound throughout Pi’s hellish adventure. Visual metaphors become so common that you begin to wonder if everything stands for something else. The film doesn’t explain all of its spiritual mysteries, which leaves much to the imagination and more than a little with which to be frustrated. Much like Pi felt, however, while floating in his lifeboat with a tiger by his side and no horizons in sight, you must have faith—and in return this film will leave an indelible mark on your soul.

Life of Pi is rated PG for “emotional thematic content throughout, and some scary action sequences and peril.” It was given a wide United States release on November 21, 2012. Life of Pi will be released on DVD and Blu-ray on March 12, 2013.