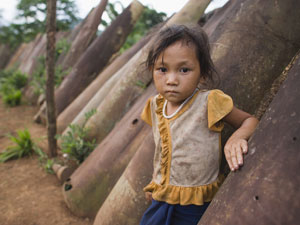 Legacies of War exhibited in Minnesota in October, 2010 at Intermedia Arts to raise awareness of the lingering problem of unexploded bombs left over in Laos from the secret bombings of the 20th Century.

Recently, they announced that Congress has appropriated $9 Million for UXO Activities in Laos for FY12

In a statement, Legacies of War spokespeople said “Legacies of War applauds Congress for appropriating $9 million for the clearance of UXO in Laos during FY12.”

Legacies of War (www.legaciesofwar.org) is a non-profit organization whose mission is to raise awareness about the history of the Vietnam War-era bombing in Laos and advocate for the clearance of unexploded bombs, to provide space for healing the wounds of war, and to create greater hope for a future of peace.

According to Senator Patrick Leahy (D-VT), Chairman of the Subcommittee on State and Foreign Operations who included the additional funding, “Congress recognizes that we have a responsibility to help clear UXO in areas where such ordnance was caused by the U.S., and Laos is a tragic example where U.S. cluster munitions continue to maim and kill civilians.”

To put it into perspective, this increase in funding is a tripling of the UXO clearance budget since 2006 and the “the largest amount ever allocated,” according to Legacies of War. Most advocates in Minnesota would argue that still more remains to be done if Laos is meet its UXO clearance goals by 2020.

Channapha Khamvongsa, the executive director of Legacies of War, noted that in the months leading up to this appropriation, Legacies advocacy staff met with key allies in the House and Senate, including Senator Leahy, to urge higher funding for UXO removal in Laos from the originally requested $5 million.

Khamvongsa noted that as a result of these meetings, former U.S. Ambassador to Laos Douglas A. Hartwick joined five other former Ambassadors in a letter calling on Secretary of State to reaffirm the U.S. commitment to addressing the UXO issue in Laos.

Ambassador Hartwick went on the record and praised Congress for taking a stand on the issue through the appropriations process. The Ambassador additionally stated “The Secretary of State has the opportunity to respond to this message from Congress by increasing the budget request for UXO in Laos in FY13. A significant, sustained commitment from the United States can contribute to a future of peace and safety for millions of young Lao citizens and solidify our friendship with an important ASEAN partner in Southeast Asia.”

Brett Dakin, chair of the Legacies of War board, joins Ambassador Hartwick in calling on the State Department to recognize the intent of Congress to prioritize UXO clearance in Laos. “Legacies of War asks that the State Department make a commitment of at least $100 million, or at least $10 million over the next 10 years, to support bomb removal, victim assistance, and mine risk education in Laos,” said Dakin. “The scale of the UXO problem is vast, but significant progress is attainable. The U.S. has the opportunity to close this chapter of its history in Southeast Asia by setting the stage for peace, prosperity, and economic development in Laos.”

Minnesota supporters of UXO clearance are looking into ways to raise continued awareness of the issue in the coming months ahead.

During the course of the war for Laos, more tons of bombs were dropped on Laos than on all of Europe during World War 2. Almost a third of them failed to detonate properly, and today continue to kill and maim Laotians almost 40 years since the end of conflict.

Photo courtesy of Phil Borges for Legacies of War