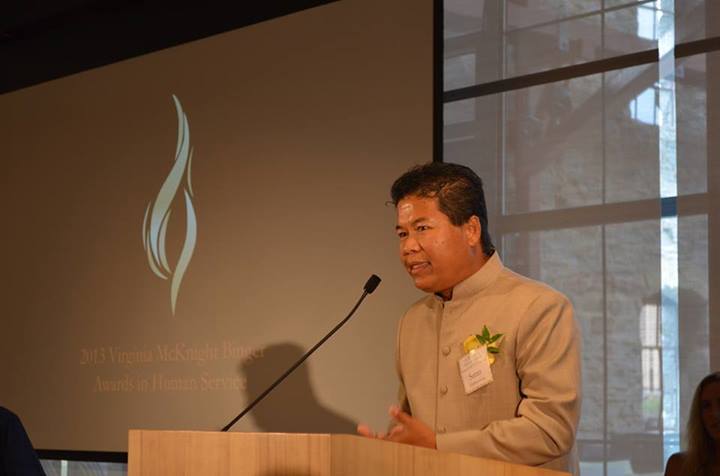 This week, the Mcknight Foundation announced that Lao Assistance Center executive director Sunny Chanthanouvong was one of only six people being honored for their work with the community with the distinguished 2013 Virginia McKnight Binger Award in Human Service. The awards were first presented in 1985, but Sunny Chanthanouvong is only the 2nd Lao Minnesotan to ever receive the distinction, the first being Kouthong Vixayvong in 1991, 22 years ago.

It’s a recognition being celebrated by many in the community. He has dedicated 21 years of his life to the Lao community through his work at the Lao Assistance Center, which he joined in 1992. Nine years later, he became the executive director, taking critical steps to develop programs that met the needs of a very diverse and changing community. Today, nearly 2 in 10 Laotians in the US are rebuilding their lives in Minnesota, thanks in part to the service and vision of Sunny Chanthanouvong, and the award-winning staff and network of volunteers he has built to support the community.

In 1984, Sunny Chanthanouvong was part of the first generation of Lao refugees whose families came to the United States following the devastating civil wars for Southeast Asia in the 20th century. As I’ve often mentioned here, between1954-1975, Laos fought a civil war that killed and displaced over 400,000 people. By the end of the war, Laos had the distinction of being one of the most heavily bombed nations on Earth in the 20th century. But rebuilding our lives in Minnesota, we’ve seen some amazing transformation take place.

Minnesota’s Laotian refugee population isn’t monolithic. It includes Lao, Hmong, Tai Dam, Mien, Khmu and many others who survived the war. Lao culture has celebrated diversity and plurality, but it can also make building a unified consensus a time-consuming process. Almost 70% of the Lao live in Hennepin County, with almost 6,000 residing in North Minneapolis. But one of Sunny Chanthanouvong’s ongoing concerns has been the lack of civic engagement and representation of our community after 30 years. “Where are their voices?” It’s a good question that deserves answers, especially as Minneapolis prepares to elect its new mayor and other officials this November.

The Lao Assistance Center under Sunny Chanthanouvong’s direction has tried to steer clear of a deficit model. It has tried to recognize the strength and potential of even one person to change the community for the better. Improving the quality of life not just for Lao, but for all Minnesotans, and maybe even the world.
This doesn’t mean that the community can turn a blind eye to the statistics, which show Lao youth struggling in schools, and nearly a third of the Lao in the US living in poverty. Nearly 50% of Lao refugees are under 18.  As a youth, Sunny Chanthanouvong was one of those who many wanted to write off as just another statistic. So he feels the concerns. He’s been there.  And he has never wanted any of the children to fall through the cracks of the system.
Sunny persevered, and with the support of his family and friends and the community, he would go on to pursue his education. The Lao Assistance Center gave him a chance just just 8 years after he arrived in the US, bringing him aboard as a youth specialist, There, he demonstrated his commitment to seeing his peers and those younger than him succeed and avoid lives of poverty and violence. This was a time when Lao gangs were beginning to rise in Minnesota. We often take the final results for granted now, but back then, the outcome was not as certain.
It’s still hard to get concrete statistics on our community, because few wanted to invest in it, despite the requests of so many of us over the decades. But research by the Asian American Justice Center and the 2009 American Community Survey shows that educationally the Lao lag behind seven other Twin City Asian American groups, and compared to all Twin City adults, are significantly behind: Just 7% of Lao adults have a college degree or better compared to 43% of all Twin City adults. Those studies also found that 42% of Lao adults have less than a high school education compared to just 9% of all Twin City adults, particularly Lao women.
These are just some of the issues Sunny Chanthanouvong has had to juggle and struggle with. When he began, there wasn’t much in the way of best practices identified for working with refugee youth from Southeast Asia, particularly Laos, whose culture and education traditions were very different from many of the more well-known East Asian and South Asian communities already established in Minnesota when we first arrived.
One study found that 70% of Southeast Asian refugees receiving mental health care met diagnostic criteria for untreated Post-Traumatic Stress Syndrome. Since he began working with the Lao Assistance Center, Sunny has been committed to helping the community turn these figures behind, although he remains humble about his efforts. He has tried to find a balance between traditional Lao models of leadership and the requirements of the American models of leadership and community building. He appreciates the struggles others face on this same road.
Sunny works hard to bring out the best in his staff, his volunteers and those who come in seeking support in the Lao Assistance Center. It is, of course, an up and down process. But he has sought to build an award-winning, highly trained and certified staff the community can trust. They have worked together over 20 years to find culturally appropriate responses to our challenges. Those dilemmas range from immigration and navigating the American health care system to creating youth leadership programs to prevent gambling, alcohol, tobacco and drug abuse. Those are hard things to explain in English, let alone other languages.
Has it paid off? In 2011, the youth won an award from the U of M Human Rights Center and Sunny has continued to work to empower them, as well as Lao elders. He has wanted them to be civically engaged and connected to one another and the mainstream community. I’m grateful he has such a continuously optimistic vision after so many years.
It would be easy for Sunny to lead the organization strictly as a reactive organization but he has consistently sought to be proactive. He believes in the importance of every person’s voices being hear and will often work long hours every week to ensure others get that chance.
It isn’t easy to do the work Sunny Chanthanouvong does. Organizing people also means making hard choices. But he has the respect of others around him because he always works to see opportunities that let everyone win and to participate in building the big picture. He is constantly committed to learning and doesn’t ask his staff to do anything he himself wouldn’t do.
Every month, the Lao Assistance Center fields over 1,100 phone calls and nearly 500 visitors. Thankfully, in recent years, these aren’t just people seeking help, but people seeking ways to help, volunteering their time to give back to their community and a country that has given so much to them. There’s more to go, but Sunny Chanthanouvong has played a pivotal step in making this possible.
With the McKnight Award, I hope others will take the time to appreciate the kind of work he and so many others are doing, and find inspiration in that. The Lao Assistance Center celebrates 30 years this year. Hopefully, they’ll be with us for many more ahead.