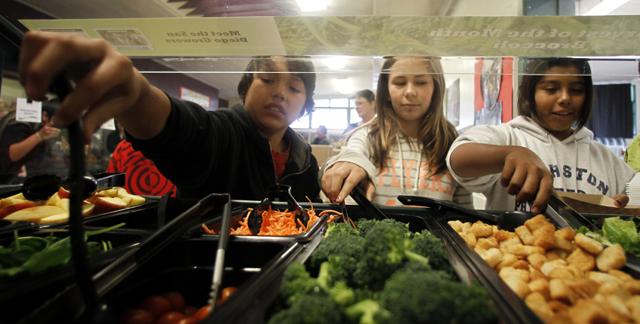 The number of students in Minnesota receiving free or reduced price lunch through the national School Lunch program has risen, from 30.4 percent in school year 2005-2006, to 37.3 percent last year. (Photo: REUTERS/Mike Blake)

As you sit down to soup or salad or a sandwich for lunch today, consider this:

The House Agriculture Committee in Congress is haggling over a proposal that would eliminate food assistance for up to 2 million to 3 million Americans and take food off the school lunch table for 280,000 children from low-income families, according to the Center on Budget and Policy Priorities.

Advocates for the needy in Minnesota are carefully following – and anxiously awaiting – action by lawmakers. There’s a long, steep row to hoe before this measure could become law, but let’s take a peek at a couple of what-if effects.

In black-and-white terms, if these kids don’t get breakfast and lunch at school, and their parents can’t afford to provide those meals, these children will lack the energy to pay attention and to learn. Further, an under-nourished child suffers long-term developmental, health and academic effects. Just ask experts at the Children’s Defense Fund Minnesota.

The current proposal, called the Federal Agriculture Reform and Risk Management Act (also known as the FAARM Act), focuses almost 80 percent of its spending on the Supplemental Nutrition Assistance Program (SNAP), frequently called food stamps, as well as other nutrition programs. Such programs aid the poor, which, the federal government defines as a family of four making an annual income of $23,050 or less.

As presented, cuts from SNAP would eliminate $16.5 billion in spending over the next decade.

The center’s bloggers, however, present this contrarian point of view:

“Contrary to proponents’ claim that the bill’s SNAP cuts are needed to rein in program growth, CBO [Congressional Budget Office] has found that SNAP’s expansion in recent years primarily reflected the severe recession and that SNAP spending will fall significantly as the economy recovers. CBO projects that the share of the population that participates in SNAP will fall back to 2008 levels in coming years and that SNAP costs as a share of the economy will fall back to their 1995 level by 2019.”

The center, by the way, describes itself as non-partisan, and makes a practice of researching and analyzing federal and state budgets and policies and their affect on low and moderate-income Americans.

Change the lens to focus on Minnesota, where the number of students receiving free or reduced price lunch through the national School Lunch program has risen, from 30.4 percent in school year 2005-2006, to 37.3 percent last year, according to the State Department of Education and reported in The Minnesota 2020 blog.

Here more than 15 percent of youngsters live at or below the poverty line, with a disproportionate number of those children in low-income families being children of color. Those numbers, too, have risen in recent years.

The numbers provide, using an apt pun, food for thought, even in this time of soaring federal budget deficits.