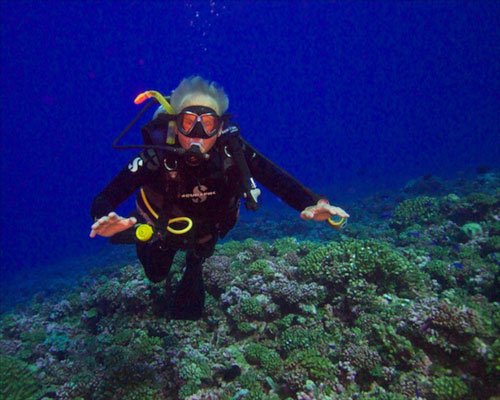 Last summer, Dayton (above) traveled 2,500 miles across the Pacific Ocean and saw dying coral reefs, an effect of climate change on the planet, he says.

Ask Chuck Dayton for the name of the most beautiful place on Earth and you’re in for a long wait. When the retired environmental lawyer finally responds he asks, “Do I have to pick only one?”

Dayton may have a hard time choosing, but ask him about the fate of his eventual pick (Tonga’s coral reefs) and all the other places of natural beauty in his world, and his answer is immediate and decisive: “Because of global warming, we are the last people on Earth who will know [Earth] as it has been for [millennia].”

For Dayton, there is no question that major climate change is coming. “. . . [T]he effects of global warming are long-term,” he says, and addressing the causes requires immediate action.

“Factors affecting climate change are ubiquitous,” he says, “and there are incredibly large [financial] resources on the other side.”

Coral reefs are some of the most beautiful and complex ecosystems on the planet, Chuck Dayton says. In heavily populated Tahiti and Moorea, the Llyr’s crew saw that the coral reefs were largely dead, which he attributes to local nutrient pollution and overfishing. When the crew reached Suwarrow, a tiny atoll some 700 miles from the nearest land, they found much of the coral there was dying. The citizen researchers attribute that to global warming: Warmer seas cause coral to lose the minute algae that provide their food and oxygen and the coral bleaches and dies.

Dayton views global warming as a moral issue. Most pollution, he says, is caused by rich industrialized countries. “Most of the suffering that will result from climate change … is going to affect people who have not contributed to the problem.”

He’s an energetic member of Minnesota Interfaith Power and Light, a group that is trying “to intensify the conversation” around issues of global warming.

“We’re speaking to the choir,” he says of his efforts, “but the choir isn’t singing.”

He adds that “70 percent of Americans understand” issues of global change, but “only 30 percent talk about it. Global warming has got to become more of a front-page issue.”

In some ways combatting global warming is like battling slavery in the first half of the 19th century, Dayton says.

“Not only did [abolitionists] face indifference in the North, but huge economic forces in both North and South were tied to slavery. [The fight for abolition] started out with a small group. It took 50 years to bring about the Emancipation Proclamation.”

At 74, the Falcon Heights resident is an old campaigner in the environmental struggle, with a lifetime of accomplishment behind him. As a young attorney, he was instrumental in achieving the greatest of all victories for Minnesota environmentalists, the 1978 federal legislation that protects the Boundary Waters Canoe Area Wilderness from logging, motorboats and commercial exploitation.

His professional life has been dedicated to protecting the natural beauty of Minnesota for the simple reason that, “It’s something I love very deeply.” 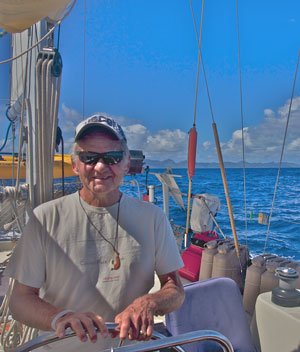 Left: Chuck Dayton aboard the Llyr, a 53-foot ketch, that he sailed on while participating in a citizen science project with Reef Check, an international nonprofit dedicated to the conservation of tropical coral reefs and California rocky reefs. (Find out more at reefcheck.org.)

He believes the BWCA is still vulnerable, and in some ways, he thinks the work is harder now. The threat nowadays comes, he contends, from mining interests who want to extract rich copper-nickel deposits from lands adjacent to the region, potentially affecting the BWCA watershed.

“There’s more money at stake for industry now,” he says, “whereas in 1978 Congress could help timber companies [during the BWCA controversy] by making timber tracts available [to lumbering] outside of the area.”

There are also new allies in the struggle today, Dayton says. “Opposition to mining has more support than we had in the ’70s, because tourism is huge. There are also many more young people who understand the values of the wilderness now.”

Dayton is someone who came to an appreciation of wilderness values at a young age. He grew up in northern Illinois, but in the summer of 1956, as a 16-year-old high school student, he made his first trip to the Boundary Waters. He already knew about commercial exploitation of the wilderness from high school biology class, but during the trip he had an epiphany.

“I was on the Lake One portage to Lake Two,” he explains, “and I thought I’d like to do something about [logging].”

His first plan was to go into forestry, “but then I learned that foresters [deal with] cutting trees, not saving them.”

In 1964, fresh out of law school at the University of Michigan, he joined a Minneapolis corporate law firm. It was there, sometime around his 30th birthday, that the call of the wild became a summons he could not refuse. He resigned his downtown job, went to work for what would become the Minnesota Public Interest Research Group (MPIRG) and dedicated himself from that point forward to environmental law.

After a lifetime spent in a highly visible role in Minnesota’s public life, there’s one question that Dayton has come to expect.

“No,” he says, “I’m not related to the governor. I’m not part of the dry goods family.”

Although Dayton likes Gov. Mark Dayton, he tells about a time when Chuck Dayton was something of a millstone around Mark Dayton’s neck. Back in late 1970s, when Mark first entered public life, his nonrelative Chuck was notorious in certain parts of the community in the Arrowhead.

Among those who feared for their livelihoods in the wake of the commercial restrictions of the 1978 Act, says Dayton, “my name was anathema. [Mark] Dayton had to explain at the outset of every talk that he wasn’t related to me.”

Dayton has never been one to distance himself from the pleasures of outdoor life. Last year, he sailed with a handful of companions across 2,500 miles of the Pacific Ocean, visiting remote atolls, including his cherished coral reefs of Tonga. The trip wasn’t all pleasure: He was part of a project of Reef Check, a nonprofit group dedicated to the conservation of tropical coral reefs and California rocky reefs.

Dayton still goes downhill skiing in Colorado with his two grown sons, although after 50 years on the slopes, he admits, “I don’t do as well on the moguls as I used to.”

So profound a lover of the natural world that he and his wife measure their marriage in “seasons” rather than years, Dayton is also a realist. Despite nearly half a century of struggle, he knows that not all his battles have ended in victory. Global warming, say most scientists, is already here, and many coral reefs are dying.

How does Dayton stay optimistic about the future? Or, as he puts it himself, “How do I deal with the fact the news is almost all bad?”

First of all he makes a careful distinction of terms. Quoting the 20th-century activist minister William Sloane Coffin, he says, “There’s a difference between optimism and hope. Optimism is the belief in change. Hope is the ability to hold in your heart the possibility of change.”

When optimism is in short supply, Dayton clings to hope, but he’s too much of a fighter to leave it there.

“Say that I’m optimistic,” he says carefully, “that we can avoid mass extinction.”

Judy Woodward is a reference librarian at Roseville Library and a regular contributor to the Park Bugle.