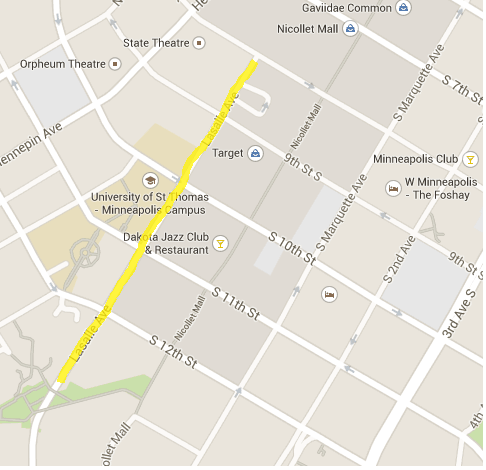 When the weather is nice (i.e., not this week), I normally walk to work on Nicollet Mall. While I’m largely a creature of habit, sometimes I like to get a little crazy and mix things up. One pleasant autumn morning that freewheeling spirit of adventure led me to stroll down Lasalle Avenue instead. This was a mistake.

It got me thinking, though, about how many different ways it’s possible to screw up an urban street, and if there was any place in the Twin Cities that displayed as many of them as the five or so blocks of Lasalle between the Greenway and 8th Street.

Things don’t actually start out looking all that bad, thanks to what I’d guess are the two oldest buildings on the stretch: On the left we have the old McPhail Center, which sadly still sits empty. Not to stray too far off topic, but the McPhail Center was responsible for this suburban kid’s first unsupervised (well, aside from friend, classmate and fellow streets.mn contributor Justin Foell) trips into downtown as teenager. I wish I had a better recollection of what this area was like back then, but sadly I don’t, aside from knowing there is a whole lot more to the St. Thomas Minneapolis campus now than there was then.

On the right is the old Continental Hotel, built in 1910 and a pretty cool example of preservation and re-use of a classic old building as transitional housing for the formerly homeless. I guess maybe my n0t-exactly-sure-what-urbanist-means heart might half-jokingly long for it to be mixed use, but hey, it’s built right up to the sidewalk and looks pretty nice, so I’m not complaining. Especially considering what lies ahead.

But before we get there, let’s turn and take a look the other direction, looking south on Lasalle: Condos, a wide desolate road, and, eventually a tunnel. My wife won’t walk with me down this stretch, as she finds the tunnel under the Loring Greenway unpleasant. I can’t say she’s wrong, but given how great I think the Greenway is, maybe it’s worth the cost. Regardless, what we see here is the people who live in these buildings sequestered away from the street. That’s probably nice for them, but it’s not so nice for activity along this block.

Turning our attention back to the old McPhail Center: I wish I had some time to do some research on this building’s history, but alas, we’ll have to make do. The facade interests me, though, in that there appear to have originally (or at least at some time in the past) been multiple entrances along Lasalle. Does that mean there was pre-McPhail retail? Could there be some in the future? My less creative side thinks this building (with quite a bit of loving restoration) would make a great home for a firm of 75 or so lawyers, but maybe that’s because it vaguely reminds of the old London office of Slaughter & May (no that’s not a reference you should get and no the resemblance isn’t that strong).

This photo also gives us a peek at yet another of Lasalle’s urban treasures: a surface parking lot. What wonders lay ahead? Up next is the first Lasalle-facing stretch of St. Thomas’ Minneapolis campus, covering the entire block between 11th and 10th. I think this stretch is the business school. And my, isn’t that a nice looking building, with lasting classic stone architecture and a distinct style? Perfect, right?

Um, no. Notice how the only door on this stretch is all the way down there on the corner? The other side of this building faces a pleasant little courtyard with a statue and, I think no less than three ways to get in and out of the buildings. On this side, facing the city, there are none. Just a long wall with plantings to keep anyone on foot from getting too close. But hey, at least there are windows (which I think are mostly obscured).

Maybe things are better on the other side of the street? The back of Target Corp.

Nope. My photography could maybe be better here, but I don’t think there is a single in-use entrance for people on this entire block either. The cars and delivery trucks can sure get in and out, but if you’re on foot, sorry, please go around the block. The “street” is really just an alley for the cars that can’t drive down Nicollet to use. This is car territory

Speaking of which, as we move to the next block, we’ve got more blank walls, another garage access, and for all you elevated walkway lovers out there, a skyway. I think there is something more than appropriate about the lingering exhaust I caught on a cold winter’s day.

But I need to be a bit more fair to whoever designed the main building in the foreground. Again, my photography shows its limits, but that sure looks like the intent was for some sort of retail to occupy the corner on the right. There are similar empty “storefronts” running up the 10th Street side of that building as well. Given how pleasant it is to walk along here, it’s strange that these aren’t filled with small retailers.

Looking a bit further up the block, I guess someone thought some red awnings would really liven up the blank wall of the Target store’s loading dock? Things are getting a little long here, but no catalog of bad urban street features would be complete without a stand alone parking structure. Thankfully, Lasalle does not disappoint. This is a particularly unpleasant one, in my view, because it really is nothing but stacked car storage. Also, my memory says there was a stabbing here not that long ago too. Fun. Finally, we can finish at the only logical place. On the list of things you want for an urban street, isn’t ending in a blank wall pretty high up?

I don’t know if Lasalle Avenue is the worst street in downtown Minneapolis, but it sure is a bad one.