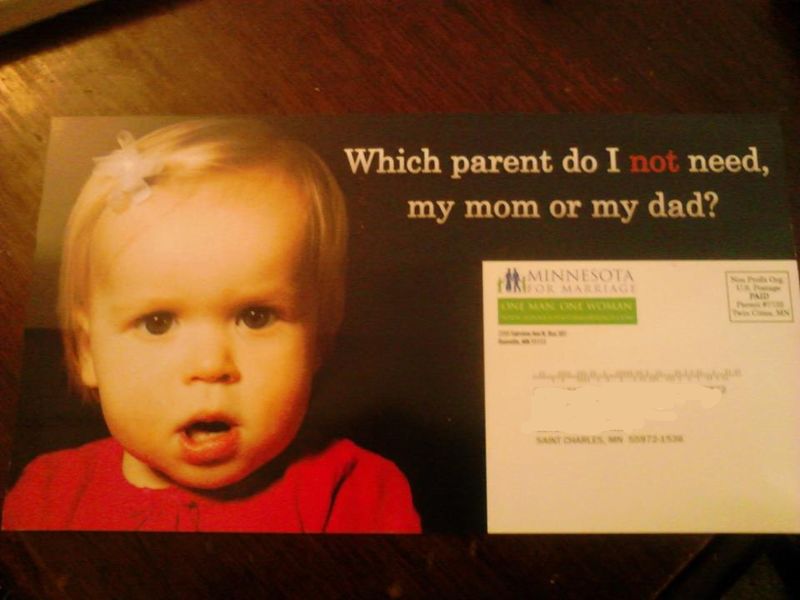 A divorced single mother in St. Charles, who supports the freedom to marry, received a mailer yesterday from Minnesota for Marriage that she shared via Facebook.

Both sides of the M4M mail piece appeal to fear: one image features a startled blonde toddler and the text: “Which parent do I not need, my mom or my dad?,” while the other carries an injunction: “Don’t let the metro area force gay ‘marriage’ on the rest of the state,” along with the command to tell Senator Matt Schmit to vote against the Dibble bill.

The quote echoes a statement by 11-year-old Grace Evans in testimony to the state legislature. (However sincere Evans was in asking the question, Bluestem believes it’s a red herring, since marriage equality will not change Grace’s own family).

A standard trope of the right, the metro v. rural trope roughly reflects the division of the no and yes votes on the marriage amendment, although a number of non-metro counties with larger and younger populations–Cook, St. Louis, Blue Earth, Nicollet, Olmsted, Rice, and Winona counties–voted no.

Bluestem has seen the divisive urban/rural split invoked to spook Greater Minnesota voters into picking Republicans in the past; however, the election of pro-marriage equality DFLers like Vicki Jensen in pro-amendment Steele County suggests that the issue isn’t quite the 2014 or 2016 deal breaker that some are suggesting a yes vote might be. 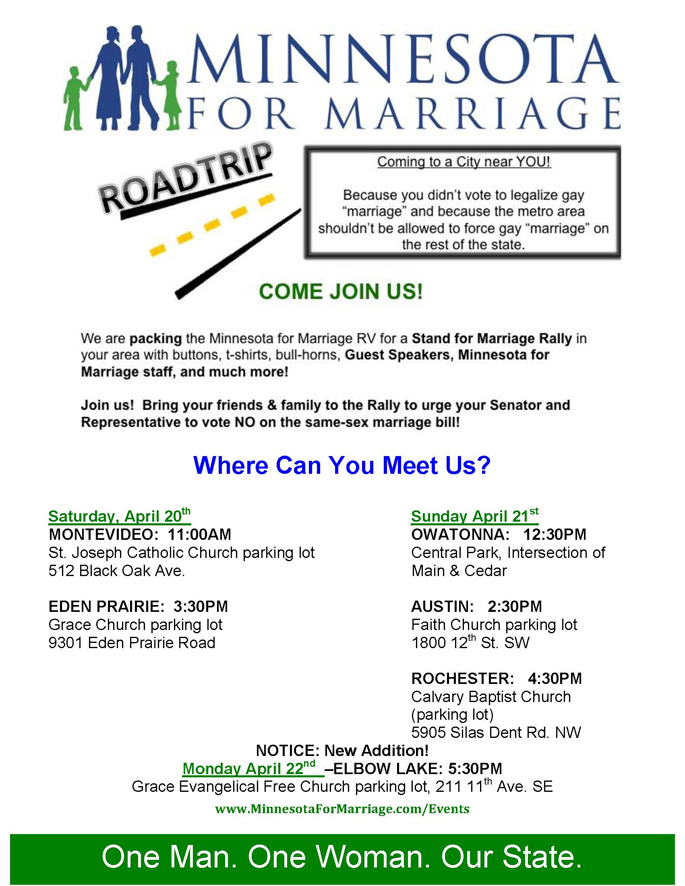 Nor have M4M rallies drawn throngs in rural Minnesota, as we noted in Greater MN leaves M4M road trip out in the cold. Another is planned for this weekend, including a stop in Montevideo. Now that we’ve relocated to Maynard, Bluestem will be asking our new state senator and representative to vote “yes” in honor of the RV’s visit.

Our friend in St. Charles was unmoved by the appeal, and planned to call Matt Schmit to vote yes on the Dibble bill. On Facebook, she writes of the absurdity of the logic in the mailer:

Definitely–the conclusion is that if gay marriage passes, a lot of us will adopt the lifestyle, leave our heterosexual partners and establish same-sex parented households. It’s ridiculous. It’s a virus..wha, ha, ha. But why do they care, and who appointed them the arbiters and judges of what society should look like? Take the stye outta your own eye…your neighbor is none of your business. And a lot of those rural folk may have gay sons or daughters–big blind spot for the marriage crowd.

Another sign that a “yes” vote might not be a death knell? Tim Kelly, who had introduced a bill that would allow recognition of civil unions, now is revising the language so that it will be civil unions for everyone, PIM’s Briana Bierschbach reports in New civil unions bill would remove word ‘marriage’ from law:

Kelly is revamping his proposal to allow civil unions in the state, which previously inserted “civil unions” alongside any instance of the word “marriage” in state statute. The bill got a cold reception from gay marriage advocates earlier this month, but his new bill would eliminate “marriage” from lawbooks and enshrine “civil unions” in its place.

“The arguments [from critics] have been that I’ve created a separate but equal definition,” Kelly said. “Over the last week and a half, that has been the only real kickback. People said, ‘We understand what you are trying to do, but what you haven’t done is you don’t call it the same thing.’ By removing marriage from statute we have the same rights for everyone.”

Gov. Mark Dayton made an impassioned case Thursday that same-sex couples should be allowed to marry in Minnesota, kicking off a frigid outdoor Capitol rally that intensified pressure on legislators to pass a marriage measure.

The DFL-controlled Legislature is weeks away from voting on a measure that would make Minnesota the 10th state to legalize same-sex marriage. Legislators are grappling with the issue as the U.S. Supreme Court takes a closer look at restrictions on same-sex marriage.

Dayton dismissed a last-ditch proposal by opponents of same-sex marriage to offer gay and lesbian couples the protection of civil unions.

“People don’t want to be civil unioned, they want to be married,” Dayton said.

The governor urged supporters to meet with legislators and “be respectful, but be persuasive.”

Right now, neither side is declaring victory, and those involved believe the margin will be only a couple votes. That has both sides frantically meeting with undecided legislators.

Perhaps the most encouraging cameo at yesterday’s rally was put in by undecided state representative Tim Faust. On Saturday, KARE-11 reported in Anti-gay marriage rally held in Hinckley:

. . .State Representative Tim Faust of Hinckley told the crowd that he was not entirely sure why he was speaking to them since he had not decided yet how to vote on the gay marriage bills moving through the legislature.

He invited those assembled to write and call him with their opinions. . . .

Rep. Tim Faust, DFL-Hinckley, has been one of the most watched members of the House on the marriage issue. He’s an undecided DFLer from a largely rural area that voted overwhelmingly for an amendment in November that would have banned same-sex marriage in the state Constitution.

A week ago, Faust had told a group of gay marriage opponents that he was unsure how he would vote.

On Thursday, Faust said for the first time that he is leaning toward legalizing same-sex marriage — even if many of his constituents disagree.

Faust stood to the side of the rally Thursday, unprotected from the sleet and rain. He said nearly all the arguments against same-sex marriage are biblical but noted that many devoted people view it the other way.

“Then the question becomes, do we have the right to impose our religious belief on others?” Faust asked. “If the reason we are arguing we shouldn’t be doing this is because of religious beliefs, it’s pretty hard to make that argument.”

Moments later, state Rep. Karen Clark walked up to Faust. The Minneapolis DFLer is a lead sponsor of the same-sex marriage legislation.

She locked arms with Faust and smiled. Then the two walked though the driving sleet back to the Capitol.

Perhaps Faust had noticed that in much worse weather than a week ago, far more people from across the state came out to speak respectfully of Minnesota values like fairness and civility than to listen to Colorado resident Glenn Stanton talked about debunked anthropology. KSTP-TV reports in Rain, Sleet, Snow Doesn’t Stop Gay Marriage Rally:

When supporters of a bill legalizing gay marriage planned an outdoor rally at the Minnesota State Capitol for April 18, they probably thought they had a good chance for decent weather.

It turns out, they couldn’t have been more wrong. Of course, no one was predicting “spring” weather featuring rain, sleet and snow on an almost daily basis. Despite the weather, hundreds of people showed up to hear Governor Dayton and gay marriage bill authors voice their support for the legislation.

Meanwhile, opponents of the gay marriage bill continue a “Minnesota for Marriage Road Trip” across the state. This weekend a bus caravan will make stops in Montevideo, Eden Prairie, Owatonna, Austin and Rochester . . .

Some things are just better parked by the side of the road of history.

Photos: One side of the M4M mailer (top) and the anti-gay travel route for this weekend (bottom). Call your state senator and representative and ask them to vote “Yes” for the freedom to marry.