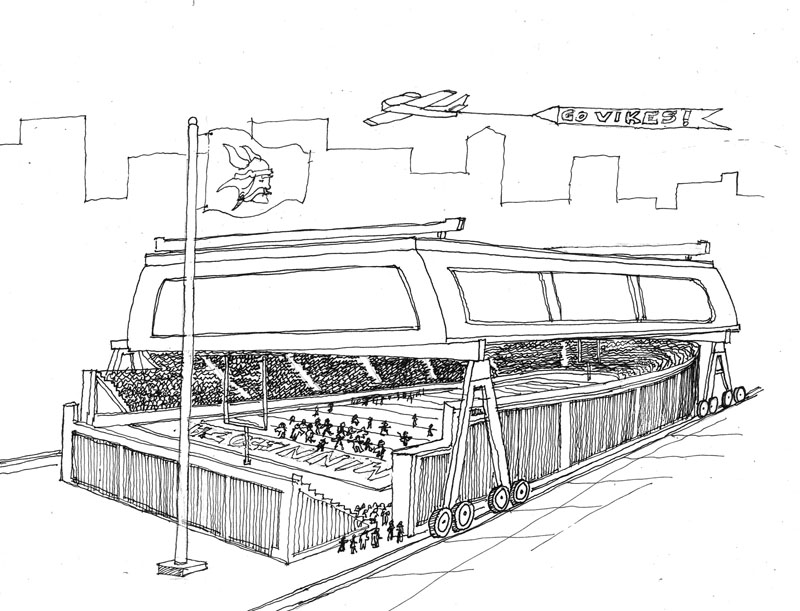 A new Vikings football stadium design with a retractable roof, whose design is reminiscent of pickup truck toppers propped up on sawhorses as seen in backyards and driveways in northern suburbs, propelled the campaign to build a new Minnesota Vikings Football stadium a giant step forward. The top structure and its sawhorses can stand outside of the playing field during nice weather, but in inclement conditions drivers from Bobby and Steve’s Auto World and their giant tow trucks will pull the massive topper and sawhorses support structure on wheels along a rail roadbed, placing the giant canopy over the playing field to protect ticketholders.

With an eye towards the recently-heralded Twins ballpark, which was lauded for its use of local materials, the Journal of American Rocket Science (JARS) took that concept several notches further, with a design inspired by local tradition, with a Minnesota cultural typology, and built with local basic materials. Vikings team owner Ziggi Wilf heralded the stadium design as “recalling the Vikings coach Buck Grant heritage,” when real Minnesota men stood by their team.

JARS designed the masterpiece to be built completely from materials available at Menards, fabricated by the box store’s night crew. Menard’s supervisor estimated the cost at three for $304,016.00, or one structure for $100,006.00.